A day after the US and the Taliban signed a deal to end the Afghan conflict, Afghanistan's President Ghani has said he will not uphold one of the pact's key agreements — the release of 5,000 Taliban prisoners. 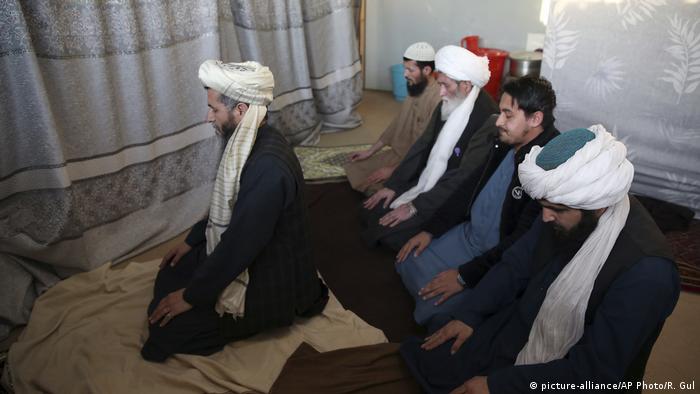 Afghan President Ashraf Ghani said Sunday the government has not committed to freeing 5,000 Taliban prisoners, a key demand for the insurgent group. Efforts to push a prisoner exchange were part of a historic pact signed between the US and the Taliban on Saturday.

The Afghan government was not involved in the signing of the deal, but did have a delegation to witness the event in Doha. Ghani's comments, at a news briefing in Kabul, included that his government made "no commitment" to upholding the prisoner release.

"This is the right and the self-will of the people of Afghanistan. It could be included in the agenda of the intra-Afghan talks, but cannot be a prerequisite for talks," he said.

The pact sealed Saturday specified that up to 5,000 jailed Taliban members will be released in exchange for up to 1,000 Afghan government captives by March 10.

Ghani confirmed that a seven-day partial reduction in violence in Afghanistan will continue with the aim of a full cease-fire.

"General [Scott] Miller has told Taliban to do so," he told reporters, referring to the US commander in charge of foreign forces in Afghanistan.

The president, who is caught up in a political crisis following fraud allegations in his re-election, cast doubt upon upcoming talks between the Taliban and the Afghan government that were agreed to as part of the deal.

The Taliban dub the Afghan government a "US puppet" and have been reluctant to establish direct contact with them.

Iran decried the accord on Sunday, saying that the US had no right to decide on the country's future. "The United States has no legal right to sign a peace agreement or to decide the future of Afghanistan," Iran's foreign ministry said in a statement.

Iran also called for the withdrawal of foreign troops from Afghanistan, saying that their presence is "illegal and is one of the main causes of the war and insecurity in that country."

A lasting peace deal could "only be achieved through inter-Afghan dialogue with the participation of all political groups, including the Taliban, and taking into account the considerations of neighboring countries," the statement read.

Ahead of Saturday's signing, however, US Secretary of State Mike Pompeo warned that Iran would denounce the terms of the agreement.

"There is a history of Iran engaging in activity inside of Afghanistan to act as a spoiler," Pompeo said.

What does the deal mean?

The deal sets into motion the withdrawal of US troops from Afghanistan — a key Taliban demand since the start of the conflict in 2001. The US will pull out 8,600 soldiers from the 13,000 currently stationed in Afghanistan.

Both Washington and the Islamist group hailed the deal as a historic milestone, which they say is a major step toward achieving peace in the war-ravaged country.

US troops will start withdrawing from Afghanistan with immediate effect, US President Donald Trump said on Saturday, when asked about the timeframe for the withdrawal. Speaking to journalists, Trump said: "Like today, OK? Today. They'll start immediately."