For thousands of years, Egypt has been dependent on the Nile and it uses the lion's share of the river's water. However, other African countries are demanding a fairer approach to sharing the river. 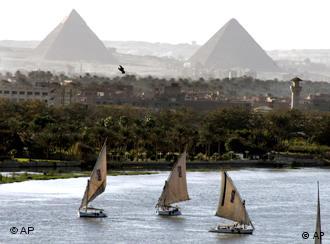 Egypt has been dependent on the Nile for centuries

In the Nile Delta town of New Nubaria, about 80 kilometers from the Mediterranean, donkeys, cattle and goats seek shelter in the shade of date palms. Around them, black irrigation tubes stick out of the hot sand.

It was here that, in the 1980s, the government turned 250,000 hectares of desert into arable land for 200,000 poor farmers, selling them the land for cheap. Today, though, many of these farmers have lost hope.

"I planted melons and peanuts, but only two years later, I was not able to use my land any more," said Abdel Chatr, who has been farming in this inhospitable region for 23 years. "Since then I have been working as a day laborer." 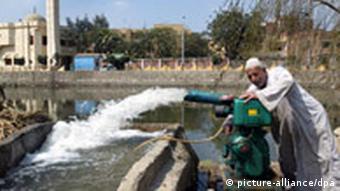 Around 15 percent of the once-arable land in New Nubaria is no longer usable, because the ground water level is too high and the water too salty. Less water from the Nile is flowing into the Mediterranean, so more and more salt water flows back into the country, part of which lies under sea level.

It's just one of the issues around Nile river water that analysts fear could spark conflict if they go unresolved.

Egypt depends on the Nile for over 80 percent of its water needs, but rapid population increases have resulted in growing water scarcity. The average Egyptian has access to 30 percent less water than UN estimates say is necessary for basic needs.

"Our Nile water quote of 55.5 billion cubic meters a year was sufficient for Egypt's 1959 population of 24 million," said Nasreddin Allam, Minister of Water Resources and Irrigation. "But today the national population stands at 80 million."

Even farmers who've made a good living off the fertile soil in the Nile delta are angry. One such farmer is Hajid Gnedi, who owns five hectares. He says he feels harassed by Egyptian authorities who have begun rationing the water that flows into his canals.

Gnedi says upstream countries like Ethiopia and Uganda are taking more water from the Nile than they are entitled to.

"If I were the Egyptian president, I would not allow these countries to blackmail us, to make us suffer and to allow less and less water into the Nile," he said. "Egypt has a right to its share of this water."

The question is, how much is Egypt's share? Egypt has its rights to Nile water guaranteed in many international agreements, including a 1929 treaty with then-colonial power Great Britain. Egypt and Sudan are currently entitled to almost 90 percent of the Nile's flow of 84 billion cubic liters a year. 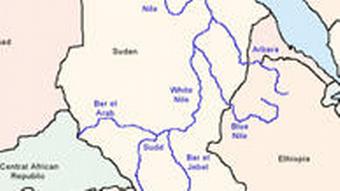 But the Nile flows through nine countries, and many of those upstream say while Egypt benefits from the Nile's flow, they live in countries often ravaged by drought.

Ethiopia, Kenya, Rwanda, Tanzania and Uganda – all upstream and poorer countries – signed a new agreement this year which they say will provide for a more equitable sharing of the river water.

Addis Ababa plans to building dams on the river and export power to other countries. It also wants to set up irrigation projects to prevent famine.

But Egypt and Sudan are firmly opposed to any new water allocation. The two countries are almost completely dependent on the Nile for their fresh water and they say upstream projects would drastically reduce the river's flow, which could be catastrophic for them.

The disagreements between the downstream states of Egypt and Sudan and upstream members of the Nile River Basin Initiative over allocating Nile water are to be discussed at a meeting in Nairobi later this month. But with populations growing in all of the nine countries that lie along the Nile, conflict over the world's biggest river is likely to continue.

But water allocation is not the only issue. Residue from fertilizer and pesticides, and waste water from greater Cairo, flow largely untreated into the Nile. 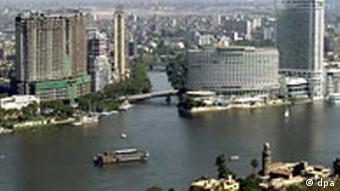 The water in the Nile Delta is now so polluted that liver diseases are on the rise and life expectancy has begun to drop.

According to Paul Weber, a consultant working in Egypt for the German development group GTZ, if Egypt does not address water scarcity and population growth, living conditions will deteriorate further.

"The population (in Egypt) is growing by 1.6 million people every year. No government and no international cooperation can create enough jobs outside traditional areas like agriculture to provide jobs for all young people," he said. "There's a lot of unrest below the surface."

A human rights advocacy organization has filed a criminal complaint against a German engineering firm over its involvement in the Merowe Dam project in northern Sudan. The company has denied all allegations. (19.05.2010)

Many people still recall the images from the 1980s of emaciated, starving humans in Ethiopia staring into the camera. But the country's droughts have not gone away. They continue to take hundreds of thousand of lives. (15.12.2009)

Listen to a report on the Nile water dispute