A German NGO has said it has footage of a Libyan coast guard vessel firing at a migrant boat trying to cross to Europe. More than 800 people have died this year making the dangerous Mediterranean Sea crossing. 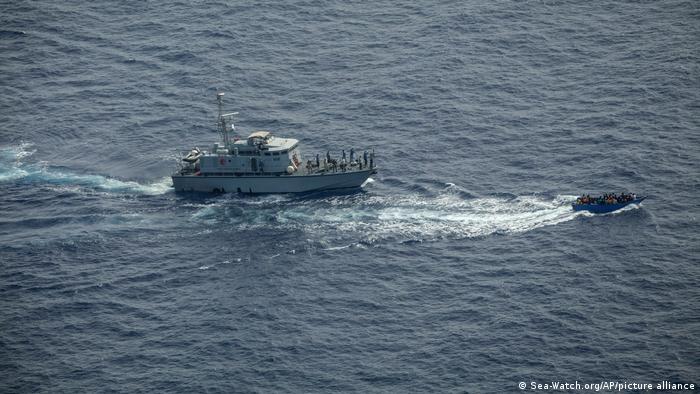 An overcrowded migrant boat tries to escape the Libyan coast guard, according to footage released by the German NGO Sea-Watch

A non-profit sea rescue group on Thursday hit out at Libya's coast guard after it released footage that it said showed authorities shooting at a migrant boat crossing the Mediterranean Sea to Europe.

During the chase, which occurred in international waters under Malta's search and rescue responsibility, men in uniform on the Libyan vessel can be seen firing twice towards the boat.

The migrants eventually made it safely to the Italian island of Lampedusa.

"Those who shoot at refugees and try to capsize their boats are not there to save them. The EU must immediately end cooperation with the so-called Libyan Coast Guard," Felix Weiss was quoted in a statement from the group released with the video.

Sea-Watch said it told the Libyan authorities via radio that the lives of the migrants were in danger.

The NGO said the Libyan coast guard replied that they were trying to save them.

Libyan authorities have not commented on the charity's claims.

More than 800 people have died in the Mediterranean trying to reach Europe this year, according to UN figures.

The Libyan coast guard is trained, equipped and supported by the European Union as part of the bloc's strategy to stem the flow of migrants and refugees to Europe's shores.

Some 15,000 men, women and children have been picked up by Libya's coast guard and returned to the North African country from the start of the year up to June 26, a record number.

But critics have condemned their return to the war-torn country, where many are placed in detention centers where there have been multiple reports of abuse and torture.

It published stories of migrants and refugees being treated as commodities and subjected to torture and gang rape.

The report was based on 1,300 first-hand eyewitness accounts.