Next stop: Art history on the Moscow metro

Moscow recently opened its 200th metro station. From socialist splendor to contemporary chic - taking a tour of the system is a journey through Russian art history.

It's always windy in the stations of the Moscow metro. Whether it's due to its construction, the movement of trains coming and going or simply the ventilation system, the constant breeze is ever-present. It tousles fashionable hairstyles, leaves passengers struggling with their newspapers, and brings with it that typical metro smell: a mix of stone, metal, grease - and history.

For the average subway passenger from abroad, a first visit to the Moscow metro can be a bit of an infrastructural shock. None of the unadorned, functional subway stations, so common in cities like Berlin, New York or London, could prepare the traveler to what they will encounter in Moscow's public transport system.

An unbelievable 8 million people use the metro each day, traveling up its endless escalators, stride across its scuffed marble floors and wait for trains in stations that, during Soviet times, were built to be the "palaces of the people." Although, wait might not be the best word - a train usually shows up every 90 seconds. 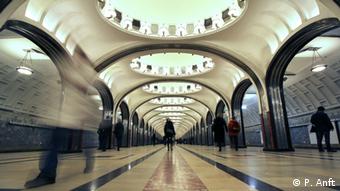 Mayakovskaya station, the first in the network, opened in 1938

One of the most extraordinary stations in the Moscow metro is its oldest: Mayakovskaya. The first train arrived at Mayakovskaya in 1938. The station is an art deco cathedral located 33 meters (more than 100 feet) below the surface.

Simple, elegant columns stretch to a vaulted ceiling, while indirect light reflects off the stainless steel ornamentation and red and gray marble. A replica of the station's design was honored with the Grand Prize at the 1939 New York World's Fair.

Just two years later, in 1941, the station served as an air raid shelter during the German bombing raids on Moscow during World War II. Walking through the station today, surrounded by its timeless elegance and almost-modern construction style, it's hard to picture its nearly 80 years of history.

Other stations from that time period are known for their gloomy atmospheres, with low ceilings and wide columns. Life-size bronze statues of heroic figures dominate at the Ploshchad Revolyutsii station. The Soviet heroes depicted are soldiers, farmers, workers and athletes.

Even a dog and chicken faithful to the socialist cause have been immortalized in the dark bronze. Brightly polished spots on certain figures reveal the superstitions of many passengers: it's meant to be good luck to run your hand over the dog's snout or the rooster's crest. 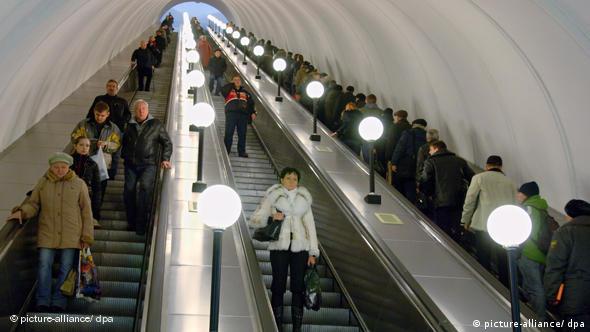 Stand on the right, walk on the left, no running (flirting tolerated)

And then there are the rituals that make the Moscow metro more than just a functional mass transit system. Amid all the jostling passengers and rushing trains, the stations also serve as meeting places: groups of tourists and school groups admire the many murals and mosaics, while old friends meet for a chat.

Even the protracted escalator rides don't have to be a nuisance - if you're with the right person. Couples cuddle on the moving stairs, and single passengers wait for the chance to flirt with those coming from the opposite direction. All this under the watchful eye of the escalator guard, who sits at the bottom of each escalator, enclosed in a small glass box, ready with a loudspeaker to chastise those who break the rules: stand right, walk left, no running.

Spending time in the stations is noticeably more pleasant than actually riding the crowded metro trains. The cars lurch back and forth, the wheels squeal and the air is stale. There's room for six passengers to bench - but only if their waistlines fall strictly within the norms.

No pity is to be expected when entering or exiting the train. Even little old ladies won't hesitate to push their way through. And the doors, which close with a terrifying bang, have no mercy: purses, shopping bags and fingers can all be trapped if a passenger is too slow. 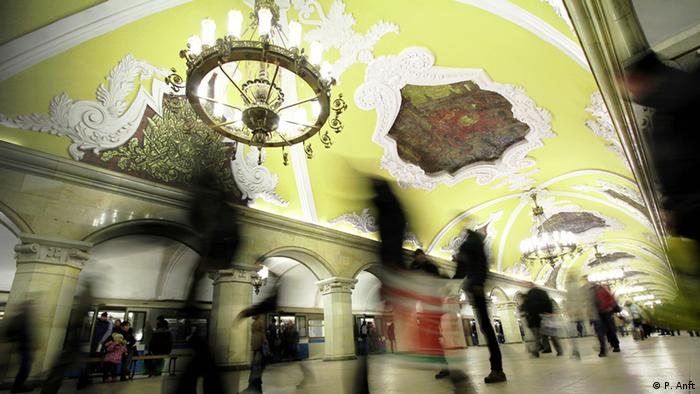 From marble to Mondrian

The most magnificent stations were built in the years shortly before the death of Soviet dictator Joseph Stalin in 1953. The best known among them is the Komsomolskaya station (seen above), also known as "Moscow's Sistine Chapel." Immense chandeliers hang from the vaulted ceilings, which are held up by marble columns. Mosaics on the ceiling show scenes from Russian history, from Napoleon's invasion in 1812 to the October Revolution in 1917.

Under Stalin's successor, Nikita Khrushchev, new stations became more sober and functional - but the expansion of the network went ahead unrestrained. Neither political crisis, nor the fall of the Soviet Union and its aftermath, could stop the growth of the metro system. 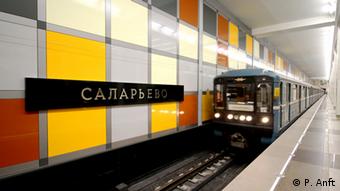 Mondrian-inspired Salaryevo station is the latest to open

The latest station to open - the network's 200th, Salaryevo - isn't dominated by stone and metal, but color. The stylish, modern design was heavily influenced by the Dutch artist Piet Mondrian, known for his paintings emphasizing horizontal and vertical lines.

The large, colorful murals and gleaming stainless steel is a hit with Muscovites. Many make the long journey to the station on the edge of the city to take in the new station, and snap some photos. But Salaryevo won't be the newest station long - this year alone, the Moscow metro plans to open 12 additional stations.

The Pushkin Museum is bringing together Cranach paintings, including many from Germany that had been confiscated by the Soviets after World War II. Years of conflict lie behind the joint Russian-German exhibition. (03.03.2016)

In the winter, Gorky Park turns into a shimmering winter wonderland which also offers, according to DW reporter Kerstin Palzer, the best ice rink in the world. (04.12.2015)

Russian art historian Ekaterina Degot is disturbed by current events in her home country. A recent increase in patriotism and anti-Western sentiment are bad news for the arts sector, she warns in an interview with DW. (05.05.2014)