The Pushkin Museum is bringing together Cranach paintings, including many from Germany that had been confiscated by the Soviets after World War II. Years of conflict lie behind the joint Russian-German exhibition. 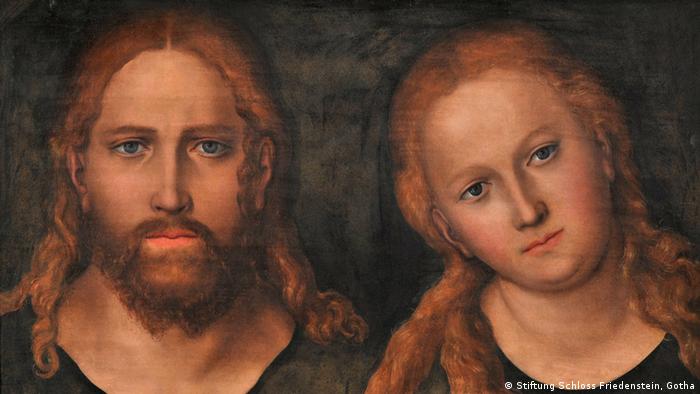 A German foundation called Stiftung Schloss Friedenstein Gotha sent nine paintings and 14 drawings by both the younger and elder Cranach to Moscow for an exhibition at the Pushkin Museum. The show, entitled "The Cranachs - Between Renaissance and Mannerism," a joint project between the German foundation and the Pushkin Museum, is a historical landmark in the ties between the two country's art scenes and is scheduled to open on Friday, March 4.

In 1946, just after the end of World War II, the Red Army had taken thousands of cultural treasures from Gotha in Germany back to the Soviet Union. In 1958, some items were returned to Germany, including those now on loan by the foundation in Gotha.

Seventy years after they were removed from Germany, these Cranach works are now hanging in the grandiose halls of the Pushkin Museum, together with 17 additional works by the father-son duo, which were never returned from Moscow.

The organizers in Moscow are proud to show all of the "Russian Cranachs" together in one exhibition, including four works from the original Pushkin collection, four from the Hermitage Museum in St. Petersburg, and one from the city of Nizhny Novgorod. Yet another four works have been loaned from private collections in Russia, with additional contributions from Madrid, Berlin, Prague and Budapest.

But a large portion of the 48 paintings on show in Moscow come from Gotha, along with the numerous drawings from the Cranach workshop on display. Particularly significant is the very Protestant work "Law and Grace," which portrays people's fear of eternal damnation and their hope in the grace of the one who was crucified. 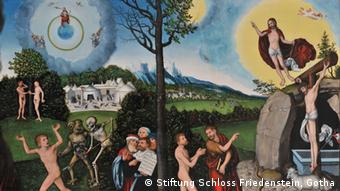 Lucas Cranach, the Elder, and church reformer Martin Luther were friends. Some of Cranach's more prominent works were previously displayed in the Pushkin Museum, including his famous masterpiece "Adam and Eve," which has belonged to the Moscow museum's permanent collection since 1995.

Other works in the exhibition are on show for the first time in decades, such as "Saint Genevieve," a very early wedding portrait of John Frederick I of Saxony, whom Cranach mentored, and "The Burning of the Hus Scripts before the Prince."

Does the Moscow exhibition bring that together which belongs together? "It's an unbelievable feeling to see these paintings, which we'd only known as blurry black-and-white photos, here for the first time," said Martin Eberle, director of the foundation Stiftung Schloss Friedenstein in Gotha, while visiting the Moscow exhibition. "It's beautiful that we've made this exhibition happen, together with our colleagues in Moscow." 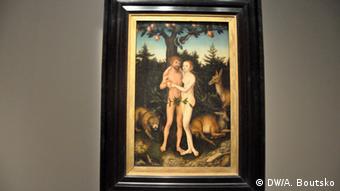 "Adam and Eve" is part of the Pushkin Museum's permanent collection

Cranach: from Gotha to Moscow

In 1505, Cranach, the Elder, became court painter in Saxony under Frederick III. He created numerous altar works and allegorical paintings, and painted a plethora of portraits of the nobility and church reformers Martin Luther and Philipp Melanchthon.

The Cranach workshop, which is estimated to have left behind some 5,000 paintings, was continued by his son, Lucas Cranach, the Younger.

The painter family remained close to the royal house, which maintained a collection of Cranach works that totaled around 40 paintings and many graphics by the early 17th century. Since the early 19th century, the collection has been kept in a museum near the royal residence in Gotha.

In the summer of 1945, the Red Army confiscated the Gotha collection, including 40 Cranach paintings. According to Eberle, the transport to the Soviet Union was carried out in a "very careful" manner. "You might think the paintings were torn from the walls, thrown into trucks and carried back to Russia. But that wasn't the case at all."

After strenuous negotiations, the Soviet Union returned a part of collections they had confiscated throughout Germany. In the late 1950s, Dresden's Old Masters Picture Gallery and the Berlin Museum Island received their lost treasures, as did the Gotha collection - to a large extent, at least.

Even though the transport to the Soviet Union was systematically organized, the return seemed arbitrary. Many collections were torn apart. In the case of the Cranach collection, 21 works were returned to Gotha, while the rest presumably remained in the Pushkin Museum.

During the communist period in East Germany, where Gotha was located, Soviet-looted art was a strictly taboo topic. The Pushkin Museum, under the direction of Irina Antonova, simply didn't talk about it.

Light wasn't shed on the ownership issue until the 1990s when lists of the art transports were published by Russian experts Grigori Kozlov and Konstantin Akinsha. The documents confirmed that Cranach works had been left in the secret storage depot of the Pushkin Museum.

Dialogue opened up a decade ago

In 2005, the museums in Germany which had been impacted by Soviet looting after the war founded a German-Russian Museum Dialogue, which opened up gradual communication between the two sides. Experts now attribute numerous subsequent exhibitions and research projects to the success of the dialogue. 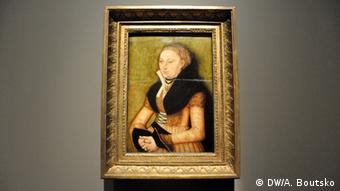 As a court painter, Cranach created numerous portraits of the noble and wealthy

In 2011, Martin Eberle from the Gotha foundation picked up the phone and placed a call to Moscow. Two years later, Irina Antonova appeared as a guest speaker at the re-opening of the Ducal Museum in Gotha and gave the green light for the current Cranach project in Moscow. It was her success, Marina Loshak, who implemented the current exhibition.

"We Germans have to learn to understand the moral approach. These works came to Russia as compensation for all of the Russian art treasures which had been destroyed," explained Eberle. "The second step is to work together openly with a scientific foundation."

Vadim Sadkov and Timo Trümper, the Russian and German curators of the exhibition in the Pushkin Museum, have said that their "collaboration was no different from that with colleagues in Paris or Madrid."

A rare painting by German renaissance master Lucas Cranach, the Elder has fetched more than $14 million at auction in London overnight, overturning the painter's previous record. (09.07.2015)

Franz Marc: The artist who saw nature through a wilder-than-Instagram filter

Chances are, you've owned a poster or sent a postcard with Franz Marc's art on it. His take on nature was radical, but beautiful. Marc died 100 years ago on March 4 at the bloody Battle of Verdun. (03.03.2016)

It couldn't come more full cirlce: Kandinsky created his only stage production based on Mussorgsky's piano cycle, "Pictures at an Exhibition," inspired by a photo exhibition. Kandinsky's stage designs are now on exhibit. (03.03.2016)