Christmas markets are a highlight of the holidays for Germans, but attempts to keep them safe could disrupt the magic. The site of Berlin's devastating 2016 truck attack has now become a testing area for heavy security. 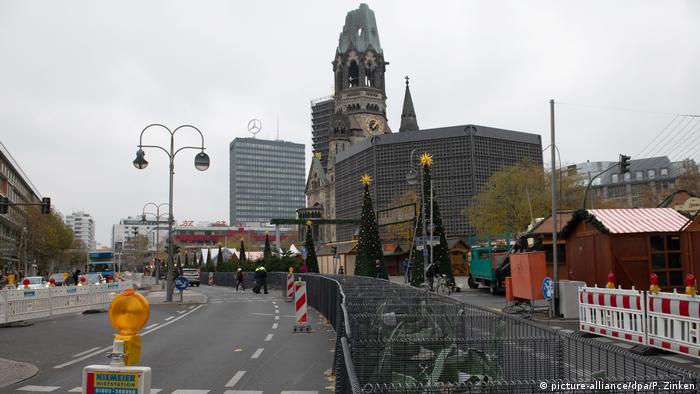 Two years after a deadly attack on a Berlin Christmas market left 12 people dead, imposing blockades have led to this year's market being dubbed Fort Glühwein.

Christmas markets are an iconic symbol of the holiday season in Germany. They represent warmth, community and regional pride, and can inspire a sense of childlike wonder. This is partly why the 2016 terrorist attack cut so deep into the German psyche.

Cities and their police forces are determined to prevent another attack. And this year, Berlin has gone all out.

All week, workers have been installing 160 giant, square, lattice-work frames on the perimeter of Charlottenburg's Breitscheidplatz, the site of the fatal attack.

Enormous sand-and-stone-filled bags have been lowered into each frame, which have all been bolted to the next to form a long row. Narrow access points have been protected with extra bollards.

During the market, private guards will patrol the grounds, joined by a heavy presence of uniformed and plainclothes police officers.

The Berlin Senate has said the elaborate €2.5 million ($2.9 million) installation will provide "unprecedented protection" against trucks weighing up to 40 tons.

Blueprint for the future

Authorities hope this year's defenses will act as a blueprint in the protection of future public events. The barriers, produced by a British firm that also protects military installations, are meant to be reusable and will become the property of police after the market ends.

"This year is quite different from the years before," Uwe Timm, CEO of working group AG City, told the dpa news agency on Thursday. "This time it was mainly about the question of how to combine the comfort of a visit with security. Despite increased security measures, the accessibility for visitors is guaranteed, for example via the surrounding multistory car parks, which are all accessible, or public transport."

But many are worried that the imposing display of security will dampen the magical atmosphere of the Christmas market.

Berlin Kurier, which called the installation Fort Glühwein after the popular Christmas market drink, said authorities were treating this setup as the possible future of Christmas markets all over Germany in the coming years. The Conference of the Interior Ministers recently called upon state authorities to develop guidelines to protect public events, and if this setup is a success, it could serve as a model for the rest of the country.

Martin Germer, pastor of the nearby Gedächtniskirche, told Berliner Morgenpost he only became aware of the increased security measures last week.

"They were not discussed with us in advance, there was obviously a high level of secrecy," he said.

Germer said he was not sure "if this is the kind of security we really need. But when politicians order these measures, we accept that. Whether and how the barriers affect the church's surroundings and the atmosphere of the Christmas market must be seen."

In the wake of the deadly van attack in Münster, many reports noted that the city was about to install bollards in the downtown area. But do barriers really offer protection? Experts say effectiveness has its price. (08.04.2018)