As part of the Erdogan government's crackdown on dissidents, Zehra Dogan was sentenced to over two years in jail — for a watercolor. Now, iconic street artist Banksy is protesting her plight with a new mural. 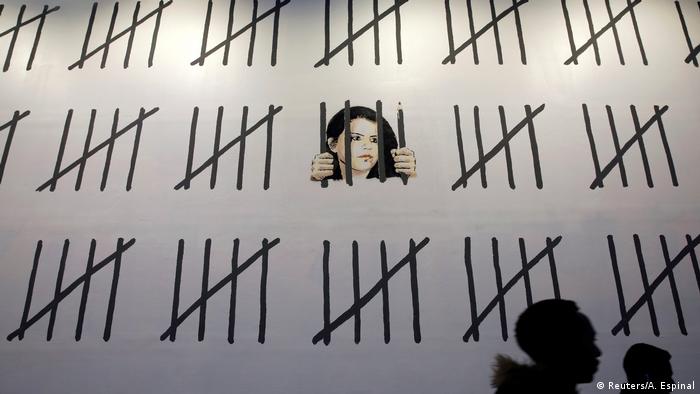 The anonymous British artist's latest work, unveiled on Thursday in New York City, is a 70-foot-long (21-meter-long) call for the government in Ankara to release Turkish journalist and artist Zehra Dogan. She was sentenced last March to over two years in jail for her painting of the Kurdish town of Nusaybin, which was partly destroyed during fights between the Turkish army and Kurdish anti-government fighters.

Banksy's work joins the chorus of international voices calling on Turkish President Recep Tayyip Erdogan to stop imprisoning Turkish writers, journalists and intellectuals, which has been ongoing since the failed 2016 coup.

Read more: How the Turkish state of emergency is affecting culture

Jailed for a watercolor

The gigantic mural covers the building's whitewashed facade with stark black hash marks that represent both time spent behind bars as well as the bars themselves. Dogan's face appears behind a set of hash mark-cum-prison bars, with her left hand grasping one line that is a pencil. The words "Free Zehra Dogan" appear in the mural's right-hand corner, a call which Banksy repeated on the artist's official Instagram account when posting a photo of the work.

"Sentenced to nearly three years in jail for painting a single picture," the artist's caption below the online photo read. 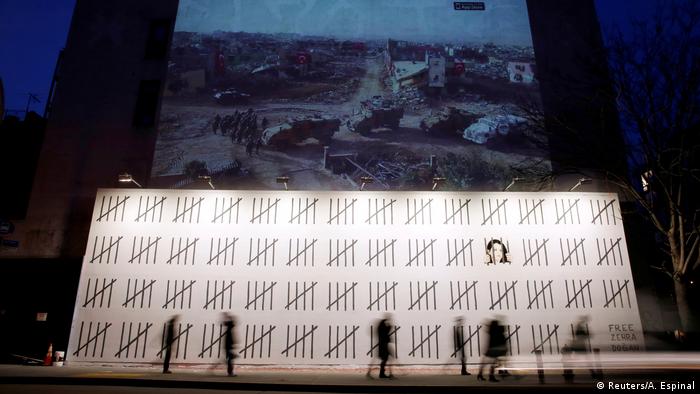 Dogan's watercolor was projected above the mural, as was the photograph she used as her basis, which can be seen above

Banksy also posted the watercolor for which Dogan was jailed, tagging the official account of President Erdogan. The image shows Nusaybin with insect-like tanks and a giant scorpion consuming people against the backdrop of bombed-out city. After posting her watercolor to social media, Dogan was arrested, for alleged ties to the Kurdistan Worker's Party (PKK), which Ankara considers a terrorist organization. Those charges were dropped but she received a jail sentence for her art.

Her watercolor was projected above the mural on Thursday evening.

"I really feel for her," Banksy said in an interview with the New York Times.  "I've painted things much more worthy of a custodial sentence."

Dogan has yet to hear about the mural, Banksy's publicist told media.

The Bowery Mural Wall, on which Banksy painted the protest work, has been used regularly over the years by artists like Keith Haring for large-scale art.

Since a failed 2016 coup, Erdogan's government has arrested many Turkish journalists and intellectuals and purged civil servants and military officers. The government also recently launched an incursion into the Syrian border region of Afrin, a Kurdish-populated area. Erdogan justified the military intervention through fears that PKK-linked Kurdish fighters in the area could incite anti-government sentiment and destabilize Turkey. Nusaybin lies on the border with Syria.

Another new Banksy: the rat race

A separate new Banksy graffiti also appeared in New York City on Thursday: a black rat running in a clock as if it were a hamster wheel. The clock is located on a building in southern Manhattan that is scheduled to be demolished. Media theorized that the graffiti could suggest the "rat race," a term often used to refer to the relentless and dehumanizing competitiveness of the modern world.

Banksy is renowned for public art that critiques contemporary politics and society such as consumerism, authoritarianism and war. The artist often uses ironic combinations of motives and images. The artist's art can be found around the world and frequently pops up spontaneously.

Read more: 'The Art of Banksy': a commercial exhibition of the anti-establishment artist in Berlin 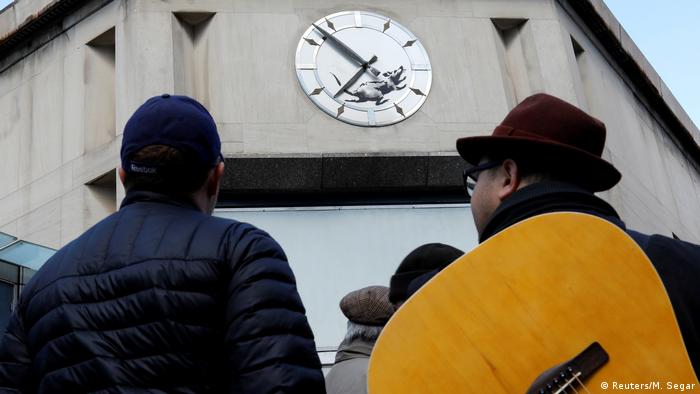 Ever since Turkey's attempted 2016 coup, a growing number of books have been outlawed and confiscated, with some even being considered evidence for certain crimes. Publishers, authors and readers are deeply concerned. (14.11.2017)