The famously anonymous street artist Banksy has unveiled a new artwork, this time in the UK coastal town of Dover. His subject: the UK's impending departure from the European Union. 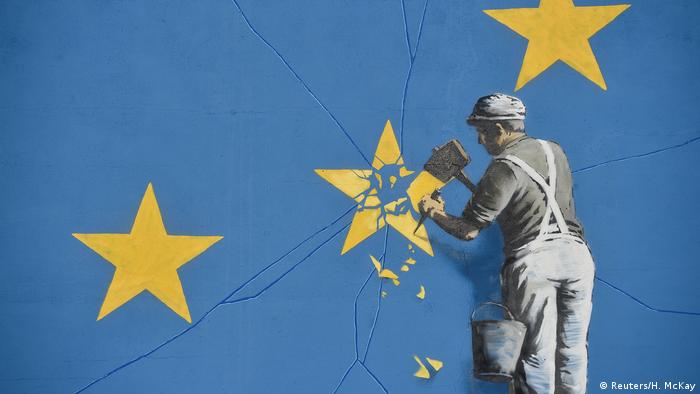 Street artist Banksy has struck again, this time in the British port town of Dover. 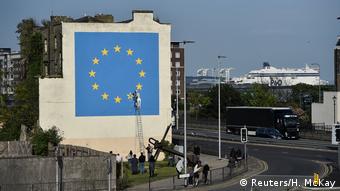 A new work by the elusive British graffiti legend appeared overnight Sunday on a wall in the ferry port, which connects England with the European mainland.

The mural depicts the EU flag, with a worker chipping away at one of the 12 gold stars.

The artist posted pictures of the work on his official Instagram feed on Sunday.

His representative has since confirmed that the mural is a Banksy original.

The artwork comes just a month after the UK officially gave notice that it was leaving the EU bloc, kicking off the contentious Brexit negotiations.

Art with a message 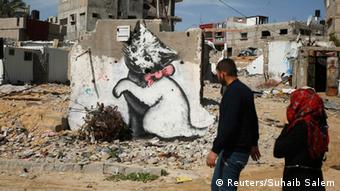 In 2015, this mural of a kitten - presumably by Banksy - appeared on the remains of a house destroyed by Israeli shelling in the Gaza Strip

Banksy is no stranger to controversy, and often uses his work to comment on cultural, political and social issues.

Previous targets have included Paris Hilton, Wall Street and the US detention center Guantanamo Bay, the last work appearing at Disneyland in California.

In 2015, at the height of the EU migrant crisis, the artist created four artworks at the Jungle migrant camp in Calais, France.

Earlier this year, he opened the Walled Off Hotel in Bethlehem, a guesthouse near Israel's huge security barrier in the occupied West Bank with the "worst view of any hotel in the world."

Banksy among street art trailblazers on show in Munich

Kicking off this Easter, an exhibition in the Bavarian capital features provocative, politically-engaged urban art from across 20 nations. Enigmatic street art legend Banksy is among the exhibitors. (12.04.2017)

A British school named a building after secretive street artist Banksy - and he returned the favor with a clandestinely painted work of art. (08.06.2016)