We must speak up for free expression in Turkey 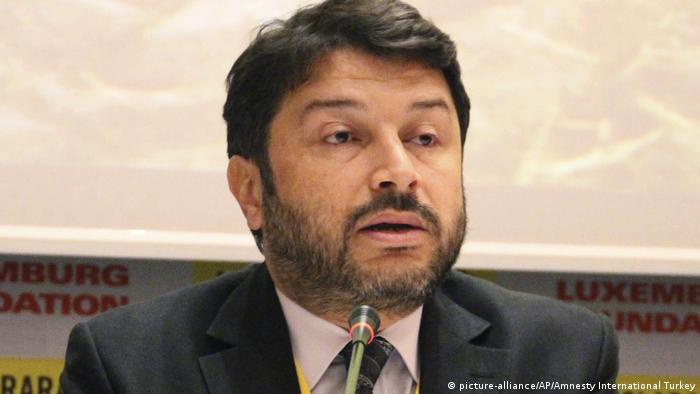 A month ago, Hatice Kilic and her three daughters waited outside Sakran Prison in Izmir beneath a dark sky. The temperature was close to freezing but they did not feel the cold. All their attention was focused on those metal gates and how they would soon roll open and Taner Kilic — husband and father — would walk through them and into their arms.

Earlier that day, the Istanbul trial court had ruled to conditionally release Taner Kilic, a lawyer and chair of Amnesty International Turkey who has been held, detained on terrorism charges, since last June. His wife and children had come to the prison to pick him up in a state of elated expectation.

Just after midnight, the prison gates opened and Taner Kilic was driven out in a police car. But he was not a free man. Instead of being released he was driven past his family to a military prison where he was locked in another cell. Unbeknownst to the welcoming party, the prosecutor had appealed the court's decision to release him and a second court in Istanbul accepted this appeal.

Kilic has committed no crime. He is charged with "membership of a terrorist organization" based on the false allegation that he downloaded ByLock, a messaging application authorities say was used by those who organized the 2016 coup attempt. But after nearly nine months behind bars, no credible evidence has been presented to substantiate this claim. On the contrary, two independent forensic experts found that there was no trace of ByLock ever having been on his phone. But if he is found guilty, he could face up to 15 years in jail.

In December, authorities admitted mistakes were made in the cases of thousands of people who have been detained for supposedly downloading the Bylock app. They published lists containing the details of more than 11,400 mobile phone users clearing them of the alleged wrongdoing. This resulted in a mass release of prisoners. Unfortunately, Taner was not one of them.

Kilic has become a potent symbol of the thousands of people unjustly jailed as part of the crackdown that has gripped Turkey since the failed coup in 2016.

Two weeks ago, Ahmet Altan, Mehmet Altan and Nazlı Ilicak became the first Turkish journalists to be convicted of involvement in the coup attempt. They received aggravated life sentences for "attempting to overthrow the government" merely for doing their work as journalists.

The bitter irony of being found guilty of "attempting to overthrow the constitutional order" will not be lost on Mehmet Altan whose release was ordered just last month by Turkey's Constitutional Court, ruling that his detention violated his constitutional rights such as the right to liberty, security and to freedom of expression. The trial court refused to implement the ruling, flouting the constitution. A protest in Berlin for the release of Taner Kilic

In a different country, such a situation would have led to a constitutional crisis. In Turkey, it felt like the grip was further tightening and the outrage was limited to a few brave voices.

Altan's sentence sets a chilling precedent for the scores of other journalists facing trials on similar trumped-up "terrorism" charges in a country which has become the biggest jailer of journalists in the world.

But the international outcry is growing. David Kaye, the United Nations Special Rapporteur on the right to freedom of opinion and expression, said that Altan's sentence "critically threatens journalism and with it the remnants of freedom of expression and media freedom in Turkey." A month ago, after the ruling to release Taner was overturned, five UN experts called on Turkish authorities to "immediately release Mr Kilic and drop the terrorism charges against him.”

I recall my conversation with Gulnihal, Kilic's middle daughter after his second hearing in November, when she told me that her situation felt like a bad dream from which she was waiting to wake up from.

"It is not something that becomes normal over time," she told me. "On the contrary, my father's imprisonment becomes more and more difficult for us to endure as each day passes."

And yet she and her family remain resolute. They know that the Turkish government is using their father's case to send a warning to other human rights defenders who could face similar charges if they continue their work. And they also know Taner is on the right side of history.

"I have always been proud of my father and feel lucky to be his daughter, now more than ever," said Gulnihal last month, soon after watching her father being led back to prison. "We will continue to fight for my father's release and my family is so thankful to everyone who stands with us and shares our sorrow in these tough times."

Stefan Simanowitz is Amnesty International's Media Manager for Europe, Turkey and the Balkans. He was part of a delegation that attended Taner Kilic's second hearing.

The release of Amnesty International's Turkey chairman ordered by an Istanbul court has been greeted with relief by rights advocates. They are demanding that Taner Kilic and 10 others accused be cleared completely. (31.01.2018)

Turkey's prime minister and president have expressed outrage that two government critics were freed by the Constitutional Court. A lower court has refused to release the pair. (12.01.2018)

Turkish journalist Ahmet Altan has been sentenced to life in prison for "violating the constitution." His daughter tells DW that the verdict is a political decision aimed at President Recep Tayyip Erdogan's opponents. (17.02.2018)