Timed to coincide with what would have been the artist's 60th birthday on May 4, the "Keith Haring. The Alphabet" exhibition at Vienna's Albertina Museum shows the enduring appeal of his iconic activist art.

Grittier, rawer, more industrial: It's hard to imagine the New York City of the late 70s and early 80s from today's perspective. The underground subway cars, laden with graffiti stood in stark contrast to the polished black limousines ferrying the Gordon Geckos along Fifth Avenue. It was that juxtaposition that provided the backdrop for the extraordinary art of Keith Haring.

Born in eastern Pennsylvania, Haring made his way to Manhattan in 1978, enrolling in the School of Visual Arts at the age of 20. Although he did not receive a degree for his studies, his professors included Joseph Kosuth and Simone Forti; the experience and their influence set him on a path to creating art responsive to its time.

Early childhood influences like Dr. Seuss and the drawings of Walt Disney helped give these drawings a cartoon-like feel and provided the initial characters that would come to make up Haring's "alphabet" — a unique set of hieroglyphs of sorts.

Read more: Long live the pug: cuddly canine gets its own exhibition 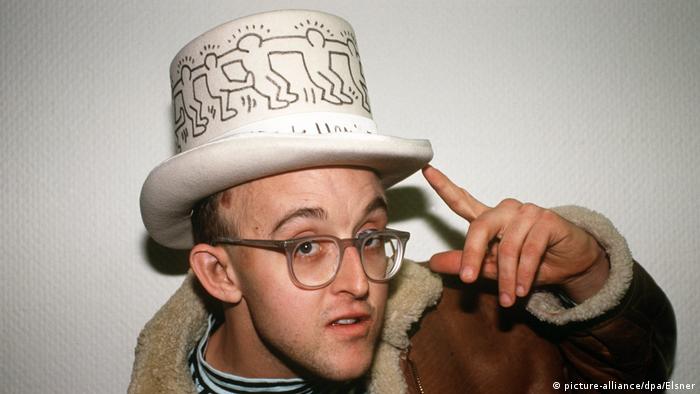 The politics of Pop Art

It's this symbolism and the characters that repeatedly appear in Haring's work that provide the backbone of an exhibition opening March 16, 2018 at the Albertina Museum in Vienna. On view through June 24, 2018, "Keith Haring. The Alphabet," comprises 100 of the artist's works, from subway art and drawings to sculptures and paintings. The selection focuses on pieces from his oeuvre that deal with social justice issues and transformation, two common threads that run through most of his body of work.

Just two years into his life in New York, Haring had made a name for himself within the lively art and pop culture scene. He considered graffiti artist Jean-Michel Basquiat a close friend. A fashion collaboration with Grace Jones led to Haring painting a unique work on her body. He befriended Andy Warhol, and arrived at Madonna and Sean Penn's wedding in 1985 with the Pop artist on his arm.

Heavily influenced by the trends on the streets of New York, Haring's repertoire referenced unique moments in pop culture. His crudely drawn response to Mickey Mouse, often seen in his work as a criticism of capitalism and mass consumerism, was dubbed Andy Mouse in homage to Warhol. 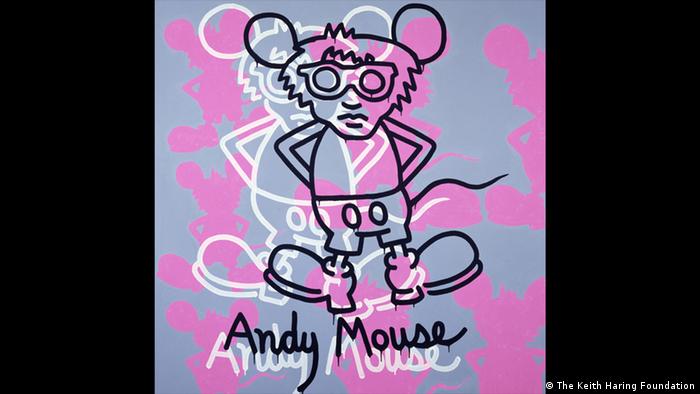 An homage from one pop artist to another: Andy Warhol as Mickey Mouse

Perhaps most memorable of his figures were the yellow-colored outlines of people in movement, their arms and legs turned outward or raised to the sky in what looks like break dancing. These dancing characters appear over and over again in drawings, as do variations on a spiky-headed dog, a symbol that some considered Haring's street tag, or signature.

Always interested in social activism, Haring turned a critical eye to subjects that were on everyone's minds in the 1980s: apartheid in South Africa, the Cold War and the military-industrial complex, HIV/AIDS, LGBTQ rights. Although his drawings included no words to reflect his political beliefs, the symbolism Haring employed made transparent his feelings about the subjects: dollar signs representing the greed of the go-go decade or mushroom clouds reflecting the artist's feelings toward nuclear disarmament. These overtly political statements helped the artist garner invitations to create work in cities across Europe, including a mural on the Berlin Wall. 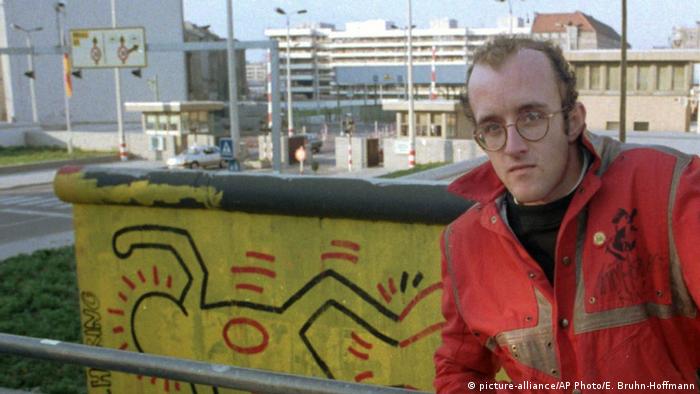 Haring and his Berlin Wall painting in 1986

The symbols that appeared in Haring's work reflected the subjects that moved the artist over time. Religious symbols like the cross are drawn to show people dying on them — a reference, likely, to Haring's teenage years spent with the Jesus movement and a response to the growing televangelism movement in the US.

Living in New York at the height of the AIDS epidemic, watching friends and former partners die of the disease, Haring also began to include skulls and corpses in his later artwork, reflecting the morbidity of the time.

Viewing Haring's works from today's perspective also makes it clear that his thoughts toward progress were ahead of their time. He imagined heads exploding from an abundance of information. He drew a television atop a caterpillar (or is it a parasite?) that is larger in size than the crowds it marches over.

Considering the meaning behind these symbols — deciphering Haring's unique hieroglyphics within the context of the time — is the aim of the Albertina's exhibition, which is timed to coincide with what would have been the artist's 60th birthday. He died of complications from AIDS in 1990 at the age of 31.

Eight months after James Rosenquist's death in March, the Museum Ludwig in Cologne is showing the American pop art icon's key works. Some of the paintings have never been displayed in Germany. (17.11.2017)

Before his death at the age of 31, Keith Haring had made a name for himself in New York's pop scene for his use of seemingly simplistic drawings and biting political statements. His work is on display in Vienna. (15.03.2018)