Long live the pug: cuddly canine gets its own exhibition | Culture| Arts, music and lifestyle reporting from Germany | DW | 23.02.2018

Long live the pug: cuddly canine gets its own exhibition

It's no hunting or watch dog; but the wrinkle-faced pug is a charming and adorable companion — and currently a very popular breed. So much so that a Düsseldorf museum has dedicated an exhibit to the irresistible pooch.

It's all about pugs at the Hetjens German Museum of Ceramics as little porcelain pugs peer at visitors from showcases, or pug pendants dangle from bracelets placed on voluminous rococo crinoline shirts.

These adorable canine curios are part of the "Housetraining Guaranteed" exhibition that opens on February 24 at the Düsseldorf museum.

Pugs came to Europe from China, where they have been bred for 2,000 years.

The dog was meant for the emperor only, says Düsseldorf city spokeswoman Valentina Meissner. But several pugs were smuggled out of the Forbidden City, and in the 18th century, the little dog reached Europe via Britain and the Netherlands.

The pug is one of the ten most popular dog breeds worldwide. The cute canine has also left its mark in the arts, literature and music.

Andy Warhol had his picture taken with a pug, and Austrian poet Ernst Jandl's hilarious poem "Ottos Mops" is well-known to many in German-language speaking countries.

"Life without a pug is possible, but meaningless," said German satirist Loriot, adding that pugs can't be compared to dogs: "They combine all the merits of children, cats, frogs and mice." 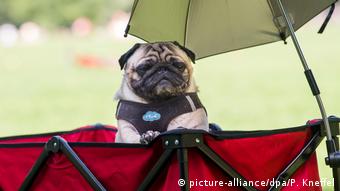 Aristocratic pets in the 18th century, pugs are still getting the royal treatment

In the 18th century, a duke even erected a stone memorial to his favorite pug who found his way home from a faraway battleground.

Click on the above picture gallery for more entertaining facts about the much-beloved wrinkly pooch.

"Housetraining Guaranteed" runs through June 3 at the Hetjens German Museum of Ceramics.

The Berlin International Film Festival has opened with Wes Anderson's "Isle of Dogs," a stop-motion adventure featuring the director's ultra-stylized approach. It also happens to be a political allegory. (15.02.2018)

Hundreds of dog lovers met in Berlin to crown this year's fastest - and slowest - pint-sized athletes. The 8th International Pug Meeting drew pug fans from around the world for a day of races, ice cream and belly rubs. (20.08.2017)

Pudgy, flat-faced, sniffling, with an adoring gaze – pugs are a hit with dog-lovers. In Germany and around the world, the soft, wrinkly, lovable hounds have become a high fashion breed. What makes them so irresistible? (23.02.2018)