Eight months after James Rosenquist's death in March, the Museum Ludwig in Cologne is showing the American pop art icon's key works. Some of the paintings have never been displayed in Germany.

James Rosenquist started out as a billboard painter, poised on scaffolds high above New York's Times Square and across the city. In the glitzy world of consumerism, he created huge ads for the latest Hollywood films showing in two New York movie theaters, as well as advertisements for cars and candy stores.

"I painted billboards above every candy store in Brooklyn," he wrote in his 2009 autobiography.

Rosenquist started off by creating small-scale models before blowing the paintings up to gigantic proportions — and he kept that penchant for XXL size artwork throughout his life.

He would often cut objects from ads in magazines — Life magazine was a favorite — and reassemble them, transferring the new combination to a large canvas.

Unlike his pop art colleagues, Rosenquist never squirted paint on canvas, nor did he use screens or strainers. He painted broad strokes on canvas with a brush, creating a strong dynamic of shape and color. He was interested in the peripheral view, in details and shapes that blow open a person's range of vision, where close-up detail becomes blurred. 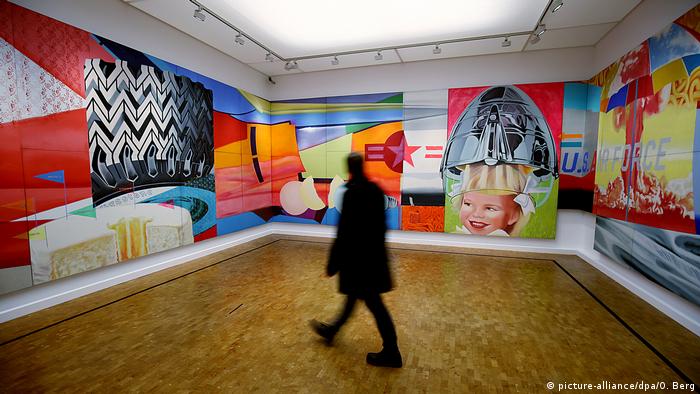 Consumer objects, a fighter plane: Rosenquist began painting 'F 111' in the midst of the Vietnam War

Tribute to an icon

Rosenquist was born in North Dakota to a family that never had much money. Issues of survival and existential concerns, combined with political worries, are a common theme throughout all his work.

Key artworks are on display now in Cologne at the Museum Ludwig retrospective entitled "Painting as Immersion," which runs from Novem­ber 18 to March 4, 2018.

Rosen­quist, the museum writes on its website, au­tho­rized the con­cept and the se­lec­tion of the works: "This will be the first ma­jor muse­um ex­hi­bi­tion as an ho­mage to the artist."

The exhibition offers a wide-ranging overview over his work from the mu­se­um's own col­lec­tion, loans from the Rosen­quist estate, and from mu­se­ums in the US, France and Sweden.

The show includes a veritable icon of the pop era: the im­pres­sive in­s­tal­la­tion F-111.

Other displays document how the artist actually worked. Through painstaking research, museum staff found the magazine cake mix ad Rosenquist used as an element in the "President Elect" painting from the early 1960s (No. 5 in the gallery, above). Every one of the still life paintings is a comment on mass culture, as well as a political statement.

Click on the above gallery for an idea of what awaits visitors to the Museum Ludwig exhibition.

Need for speed: how cars have inspired modern art

The Futurists glorified it, Pop Art dismantled it, the Fluxus movement set it in concrete. An exhibition at Art Gallery Emden shows how the car has been an influential art object for over a century. (14.07.2017)

Eight months after James Rosenquist's death, Museum Ludwig shows the American pop art icon's key works in Cologne. Some of the paintings have never been displayed in Germany. (17.11.2017)

Considered a superstar of pop art, the British painter is one of the most influential artists living today. He turns 85 on July 9.