President Xi Jinping has said ties between Beijing and Washington and US Secretary of State remain 'stable.' John Kerry has sought to defuse tensions over a maritime territorial dispute in the South China Sea. 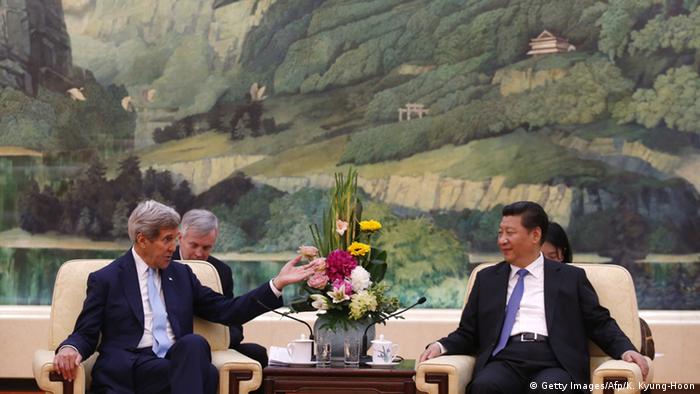 As US Secretary of State John Kerry wrapped up a two-day visit to China on Sunday, both sides stressed the need for dialogue to resolve competing claims for a group of islands in the South China Sea.

“In my view, US-China relations have remained stable overall,” Xi told Kerry at Beijing's Great Hall of the People, adding “that he look(ed) forward to continuing to grow this relationship,” on his planned September trip to Washington.

Kerry's trip to Beijing had been dominated by deepening security concerns about the country's maritime ambitions in the South China Sea.

China is going ahead with projects which the US, and most members of the Association of Southeast Asian Nations, suspects are aimed at building islands and other land features over which China will then claim sovereignty.

Before departing for Seoul, South Korea, Xi told Kerry China and the US should handle disputes so not to damage bilateral ties.

During a joint press conference on Saturday, China's Foreign Minister Wang Yi responded saying Beijing would not back down on defending its sovereignty and territorial integrity.

“I would like to reaffirm that China's determination to safeguard its sovereignty and territorial integrity is as hard as a rock,” Wang said.

“It is the people's demand of the government and our legitimate right,” he said.

“With regard to construction on the Nansha islands and reefs, this is fully within the scope of China's sovereignty,” Wang said using the Chinese name for the seven reefs in the Spratly archipelago of the South China Sea.

Wang also expressed concern at the US' plans to send military aircraft and ships to the South China Sea.

Kerry did not respond to Wang's claims on whether the US intended to send military ships and aircraft to the region.

However, Washington did maintain that it does not take a position on the sovereignty claims but insists there needs to be negotiations between the parties.

Kerry's trip to the country is seen as a forerunner for the annual US-China Strategic and Economic Dialogue next month in Washington and Xi's expected visit to the capital in September.

US, China at odds over South China Sea dispute

US Secretary of State John Kerry has urged China to reduce tensions in the South China Sea. Kerry’s two-day trip to Beijing has been overshadowed by growing security concerns over the country’s maritime objectives. (16.05.2015)

India and China have signed numerous deals in areas including renewable energy, ports, financing, telecommunications and film. The trade deal between the two Asian neighbours is reportedly worth billions. (16.05.2015)