'Nazi Grandma,' sentenced for denying Holocaust, fails to show up at German prison

Ursula Haverbeck, dubbed the "Nazi Grandma," failed to turn up to begin her jail term last week but has been tracked down by police and taken to prison. She had been convicted on eight counts of incitement. 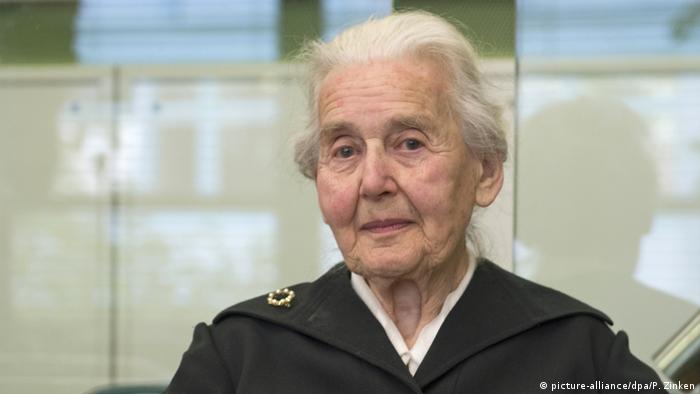 Authorities in western Germany arrested serial Holocaust denier Ursula Haverbeck on Monday after the 89-year-old failed to show up at prison last week to start her sentence.

"After the convict failed to report to the relevant penal institution within the deadline, prosecutors in Verden on May 4, 2018 issued an order to execute the sentence and have charged police with its implementation," prosecutors said. Police found Haverbeck at her home on Monday and transferred her to prison to begin her two-year term.

Haverbeck was sentenced for incitement by denying the mass murder of millions of Jews during the Nazi era in Germany.

Haverbeck, who  German media often refers to as the "Nazi Grandma," has never spent time in prison despite several previous convictions for denying the Holocaust, in which six million Jews were murdered by the Nazis between 1941 and 1945.

She was supposed to start her prison sentence in the town of Bielefeld last Wednesday.

The International Auschwitz Committee had said on Sunday it hoped Ursula Haverbeck would soon be in prison.

"One can only hope that the judiciary and police are urgently looking for her," said Christoph Heubner, the executive vice-president of the International Auschwitz Committee.

German newspaper Westfalen-Blatt reported that Haverbeck's home in Vlotho in central Germany seemed empty for days with mail piling up in front of the door but on Monday, police found her there.

During her trial, Haverbeck spoke of an "Auschwitz lie," claiming it was not an extermination camp, but merely a labor camp.

She and her late husband Werner Georg Haverbeck, who was an active member of the Nazi party, founded a right-wing education center called Collegium Humanum. The center was banned in 2008.

Haverbeck also wrote for the right-wing magazine Stimme des Reiches (Voice of the Empire). She used the magazine to express her views that the Holocaust never took place.

Under German law, denying the Holocaust constitutes incitement to hatred and can carry a prison sentence of up to five years.

A Berlin court has sentenced serial Holocaust denier Ursula Haverbeck to six months in jail for denying the Nazis' extermination of Jews. She has never spent time in prison despite several previous convictions. (16.10.2017)

Amit Weiner's project "Music in Times of Tragedy" revives the oeuvre of the Jewish composers who were murdered by the Nazis but who created timeless music that has survived. (30.04.2018)

The so-called "Nazi Grandma," Ursula Haverbeck has been handed another prison sentence. The notorious Holocaust denier will serve a one-year sentence.