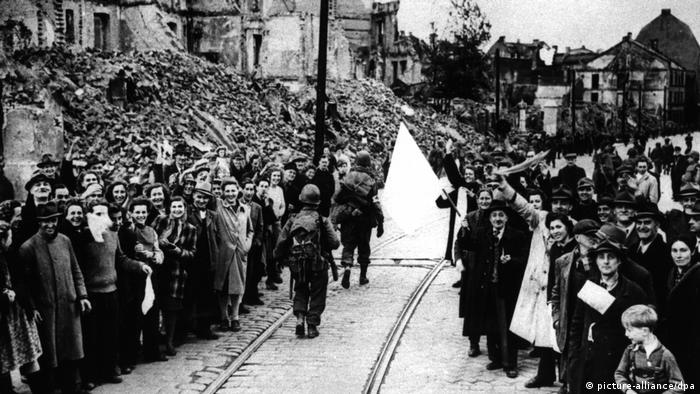 On May 8, 1945 "the weapons were silent in Europe." That poetic description meant that there was no more fighting on frontlines, no more killing of civilians, no more bomb attacks on cities.

The Wehrmacht leadership had already signed the unconditional surrender at the Western Allies' headquarters in Reims the day before. A day later, on May 9, the ceremony was repeated once again in the Karlshorst district of Berlin in the presence of representatives of the Soviet Union — which is why still today there are different dates commemorating the end of the World War II in Europe. In any case, fighting ceased at 11 p.m. on May 8. The war cost some 60 million lives in Europe, East Asia and the Pacific.

The end of a nightmare

For the Nazi regime in Germany, the end of the war was only an interim stage. Along with members of the old power elite, Grand Admiral Karl Dönitz resided at the Mürwick Naval School in the northern German city of Flensburg until the end of May, behaving as if he still wielded supreme power over Germany. In other parts of the country, Nazi rule had already ended in March or April with the rapid advance of the Western Allies and Soviet troops. 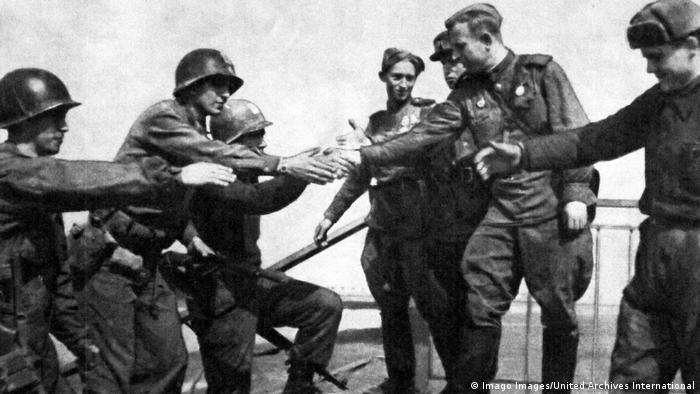 Soviet and American troops meet at the River Elbe, near Torgau in Germany, marking an important step toward the end of World War II in Europe

Several Wehrmacht officers and courageous civilians in the West made sure that many cities destined for unconditional defense were handed over without major fighting. In the East, however, fighting was fierce to the end. For most people in German territory — civilians, forced laborers, prisoners of war and concentration camp inmates — May 8 was primarily a symbolic date. They had already been defeated, occupied or liberated — depending on who you asked — much earlier. May 8 did not play a major role in their recollection, but it was important for people outside Germany, for whom a nightmare had come to an end.

The war had begun on September 1, 1939 with the German invasion of Poland, followed by the French and British declaration of war on Germany, and soon after the Soviet attack on eastern Poland. At first sight it seemed to be a war of revision to destroy the post-1919 order. But early measures taken against the Jewish population of Poland were a sign that this war was soon to become a war of ideology: against the Slavs, against the Jews, against Bolshevism. That is what Adolf Hitler and his minister of propaganda, Joseph Goebbels, openly called it beginning in the summer of 1941. It was a war that left traces throughout Europe, both physically and psychologically. In the West it became a trauma that continues to have an impact here and there; in the East it became a disaster, leaving behind a trail of destruction that can still be seen today.

A part of the German population were fanatical supporters of Hitler and staunch Nazis; others were merely opposed to the post-1919 order and celebrated its military annihilation during the first two years of the war. Still others were indifferent, as long as the war did not interfere too much with their lives; only a few were opposed to the war. This began to change in 1943 after Germany's defeat at Stalingrad and the increasingly violent bombing missions against Germany. Increasingly, people began to distance themselves from the Nazi regime that in turn reacted with a strategy of inciting fanaticism among the population.

Read more: Opinion: When victory does not mean liberation

Denazification of the Germans was gradual. For some people it started as early as 1943, or with the defeat that was inevitable since the beginning of 1945. For others it began with the growing prosperity in postwar Germany. Some people remained committed Nazis for the rest of their lives. The end of the war on May 8, 1945 was only an interim step in the psychological process of German denazification. Politically, however, it was the most important step — the prerequisite for the creation of another, new Germany.

Too many Germans believe that the Holocaust has nothing to do with their own family story, says Jewish filmmaker Sharon Ryba-Kahn. Seventy-five years after the end World War II, it's time to ask difficult questions. (07.05.2020)

Is the view of World War II and V-E Day skewed? That's what British historian James Holland thinks and calls for a realignment of the way we look at those events. (07.05.2020)

A new documentary explores how Albert Speer, one of Hitler's right-hand men, portrayed himself as the "good Nazi" and spread this myth to a mass media level. (18.03.2020)

Estonia hit by cyberattacks after Soviet memorial removal 3h ago

US, Taiwan to start formal trade talks in autumn 5h ago

Opinion: Olaf Scholz should have shut down Mahmoud Abbas — he failed 20h ago