The family of a jailed British-Iranian woman says she has been taken to the psychiatric ward of a hospital in Tehran. The case has fueled tensions between Iran and the UK amid attempts to salvage a 2015 nuclear deal. 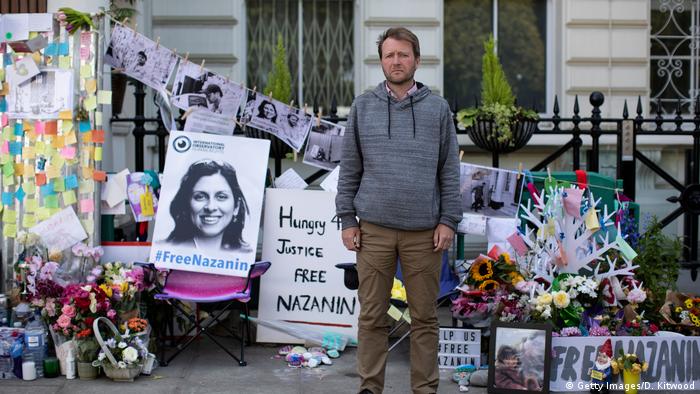 Nazanin Zaghari-Ratcliffe was transferred from Evin prison to the psychiatric ward at Imam Khomeini hospital, where she is being held by the Revolutionary Guard, her father said Wednesday.

The British-American aid worker was detained in April 2016 at a Tehran airport as she was leaving the country to return to the United Kingdom with her young daughter after a family visit. She was subsequently sentenced to five years in prison for allegedly trying to overthrow the Iranian government.

She has denied all charges.

A statement from the Free Nazanin Campaign said Zaghari-Ratcliffe's father had visited the hospital on Tuesday, but was barred from seeing her.

"This is unusual. She has now been kept isolated from family or legal contact under IRGC (Islamic Revolutionary Guard Corps) control for over 36 hours," the campaign group said, adding that it was not clear how long she would be held at the hospital or what kind of treatment she would receive there.

Last month, Zaghari-Ratcliffe and her husband ended a two-week hunger strike aimed at pushing for her release and raising awareness about her case.

A psychiatrist recently recommended that she be "instantly hospitalized due to her sharp deterioration since her previous meeting, and the risk of her taking matters into her own hands," the statement said.

Iran's Foreign Ministry has knocked back calls from British officials for her release and has said that Zaghari-Ratcliffe — a project manager with the Thomson Reuters Foundation — will serve out her full sentence.

The UK has repeatedly demanded Zaghari-Radcliffe's release from confinement. "We are extremely concerned about Nazanin's welfare and call for her immediate release," Prime Minister Theresa May's spokesman said on Wednesday, in response to the latest development.

"We urge Iran to allow family members to visit her and check on her care," the statement continued.

The two cases risk inflaming tensions between Iran and European countries at a time when world powers are trying to prevent the collapse of a historic nuclear deal sealed with Tehran in 2015.

The US withdrew from the pact last year and reimposed sanctions on Iran. Tehran has responded by violating limits on uranium enrichment and stockpiling stipulated in the accord.

Nazanin Zaghari-Ratcliffe, who is being held in a Tehran prison, is refusing food as she marks her daughter's fifth birthday. She was arrested in 2016 after she took her daughter to visit family. (15.06.2019)

Iran has confirmed it has been keeping a British-Iranian woman under arrest for seeking to overthrow the government. If tried, the 37-year-old could face the death penalty. (19.06.2016)

The UK will grant diplomatic protection to Nazanin Zaghari-Ratcliffe, a British-Iranian aid worker detained in Iran since 2016. The Foreign Office said the move "signals to Tehran that its behavior is totally wrong." (08.03.2019)