NATO thwarted the Soviets with its Cold War Double-Track | Europe | News and current affairs from around the continent | DW | 12.12.2019 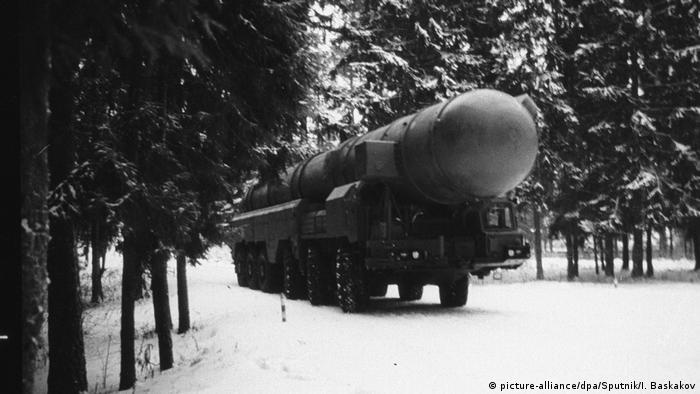 By the mid-1970s, the tensions between the North Atlantic Treaty Organization and Warsaw Pact alliance began to ease after three decades of mutual animosity and mistrust. On July 21, 1975, more than 35 countries, including the US and Soviet Union, signed the Helsinki Accords, pledging to recognize the inviolability of frontiers and to aim for peaceful conflict resolution. The agreement sparked hope.

In reality, however, the arms race between the US-led Western bloc and the Soviet-dominated East continued. In 1977, the Soviet Union shocked the United States and its allies by replacing intermediate-range nuclear missiles in the Eastern bloc with the SS-20 surface-to-surface Saber missile system, capable of pinpointed strikes on targets 5,500 kilometers (3,300 miles) away.

The SS-20, or RSD-10 Pioneer as it was called by the Soviets, was considered the most dangerous intermediate-range nuclear missile system ever deployed in Europe. It could be armed with three independently controlled nuclear warheads, giving it 11 times the destructive power of the nuclear bomb dropped on Hiroshima in 1945. SS-20 missiles could be transported by lorry and prepared for launch in mere minutes, ready to hit targets across western Europe. The SS-20, in short, once again stoked Cold War animosity.

German Chancellor Helmut Schmidt, of the Social Democrats, believed that the missiles had tipped the strategic balance in the Soviets' favor. He told the public broadcaster ZDF that he feared that "they will become an instrument to coerce Germany; these rockets are chiefly aimed at Germany." In a 1977 talk at London's Institute for Strategic Studies, Schmidt suggested that NATO station intermediate-range missiles on West German soil to counter the SS-20. 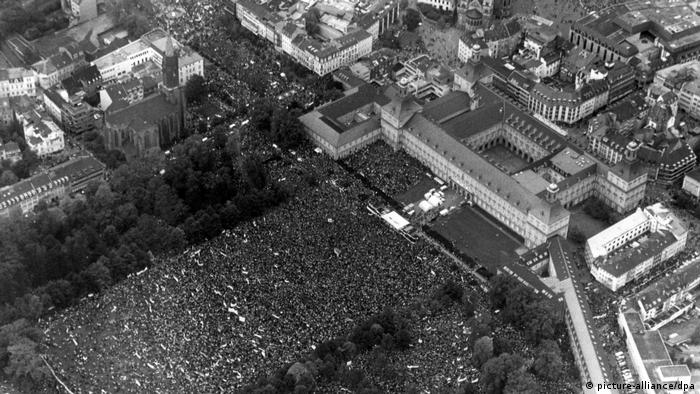 On December 12, 1979, NATO signed off on the Double-Track Decision, which envisioned disarmament talks with the Soviets in the hopes of seeing the SS-20 removed from the European theater, yet also promised to deploy US intermediate-range nuclear missiles by 1983 if the Soviets did not budge. Ultimately, the Soviets did not let themselves be cowed into talks. On December 24, 1979, the Soviet Union invaded Afghanistan. Tensions between NATO and the Warsaw Pact alliance once again grew. The arms race escalated.

In West Germany, hundreds of thousands of people took to the streets to protest against the saber-rattling. In the German Democratic Republic, too, citizens rallied against the arms race. Protesters believed that if they could keep the United States from deploying missiles, "they could not only stop the arms race between East and West but possibly also the outbreak of war," the German historian Manfred Görtemaker said.

The peace movement grew into a political force. Founded in 1980, the German Green Party won its first seats in the Bundestag in 1983. US President Ronald Reagan, in power since 1981 and seemingly more interested in an arms race than in talks with the Soviets, was the peaceniks' bete noir. Chancellor Schmidt's power was gradually waning, in part because of the unpopularity of his social and economic policies, but also because of his support for Double-Track. In 1982, he was ousted following a vote of no confidence, and replaced by Helmut Kohl, of the Christian Democrats (CDU), who largely stuck to Schmidt's foreign policy agenda. On November 22, 1983, the Bundestag agreed to the stationing of the US's intermediate-range Pershing II nuclear missiles and cruise missiles on its territory.

"When Kohl became German chancellor, we were essentially at the height of a new Cold War," said Horst Teltschik, a high-ranking Chancellery official at the time. "Up to 500,000 protesters from the so-called peace movement were taking to the streets," he added. Teltschik said Kohl had always agreed with Schmidt's conviction that, unless the Soviets removed their missiles, Germany would have to deploy its own. 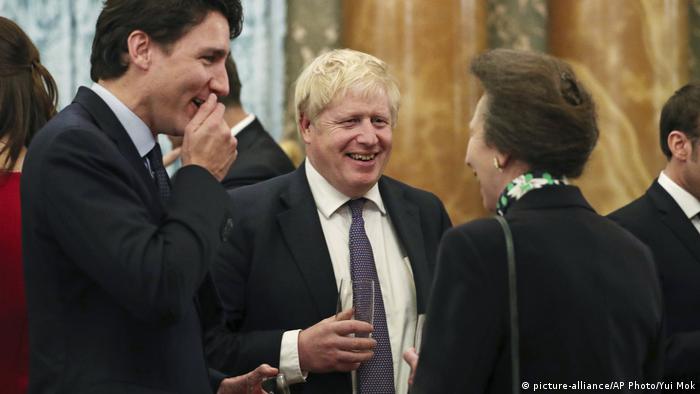 In 1985, Mikhail Gorbachev took over as the Soviet Union's leader. He pursued a far less antagonist approach and domestically introduced the principles of Glasnost (transparency) and Perestroika (restructuring). The Soviet Union's tremendous arms expenses were a major driver of Gorbachev's reforms, and made him open to disarmament talks. The capitalist West had essentially bankrupted the socialist East through the ongoing arms race.

Talks began in 1985, and by December 1987 the Soviets and NATO had agreed to destroy all missiles capable of reaching targets between 500 and 5,500 kilometers away. In 1991, the US and Soviet Union signed the Strategic Arms Reduction Treaty (START I), limiting arsenals of long-range nuclear weapons. "The outcome of NATO's Double-Track Decision — as we had always promised — was not that it would reduce the number of missiles, but scrap them entirely," said Hans-Dietrich Genscher, a Free Democrat and Germany's foreign minister at the time. He said NATO had always aimed for the removal of all missiles — meaning that Double-Track was a highly effective disarmament measure.

And there were other enduring developments from the era. The Greens, the successors of the German Green Party, consistently outpoll all parties except Chancellor Angela Merkel's CDU. And the Cold War, it seems, has returned. Russia's annexation of Ukraine's Crimean Peninsula in 2014 and French President Emmanuel Macron's criticism that today NATO is effectively "brain dead" mean the alliance faces serious challenges — both external and internal.

The 1972 World Chess Championship saw Bobby Fischer of the US challenge the Soviet Union's Boris Spassky in the "Match of the Century." Fischer ended up winning.