Russian President Vladimir Putin had an identity card issued by East Germany's notorious Stasi secret police, it has been discovered. But this does not necessarily mean he worked for them. 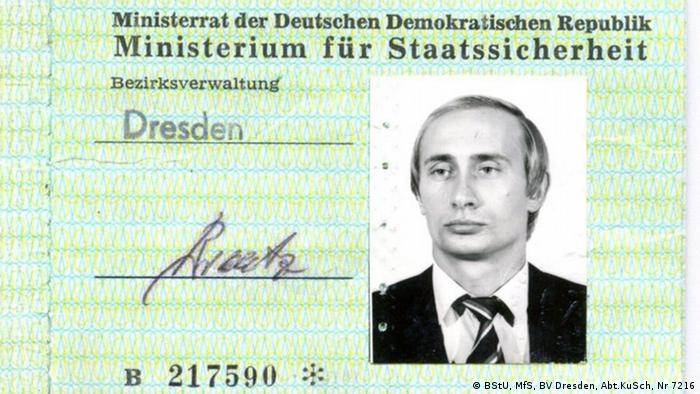 Researchers in Germany have found a Stasi identity card belonging to Russian President Vladimir Putin from the period when he was a KGB officer active in the city of Dresden in what was then communist East Germany.

The director of the Stasi Records Agency, Konrad Felber, said in Tuesday's edition of the Bild daily newspaper that the existence of the document, which Putin held between the end of 1985 and the end of 1989, had been "completely unknown" up to now.

The identity card was found by chance after a media outlet had requested other documents from the archive, according to Felber.

Felber said the card would have allowed Putin easy access to all offices of the East German secret police, but that it didn't "automatically mean that [he] worked for the Stasi."

Read more: 57 years since the building of the Berlin Wall

However, it would have facilitated Putin's efforts to recruit German agents for the Soviet secret police, the KGB, without his having to tell anyone he worked for them, Felber said.

Putin was stationed as a KGB agent in Dresden from 1985 until 1989, when East Germany collapsed, and one of his daughters was born there.

He was an eyewitness to one of the most dramatic moments of the peaceful revolution that led to the country's dissolution when some 5,000 demonstrators gathered in front of the Stasi headquarters on December 5, 1989, demanding it hand over its documents. Some of those protesters also moved on to a nearby KGB villa with Putin present. Although their demand was not met, potential clashes with Soviet military personnel were avoided. Putin himself once said he had brandished a pistol to warn off the crowds.

Putin later went on to head Russia's FSB, the main successor to the KGB, before becoming Russian president for the first time from 2000-2008 and again in 2012 after a period in between as prime minister.