NATO invites Montenegro to join as Russia warns of provocation

NATO has invited Montenegro to become the 29th member of the alliance. The decision is likely to increase tension with Russia just as Germany's foreign minister has said NATO and Moscow could reopen a dialogue forum. 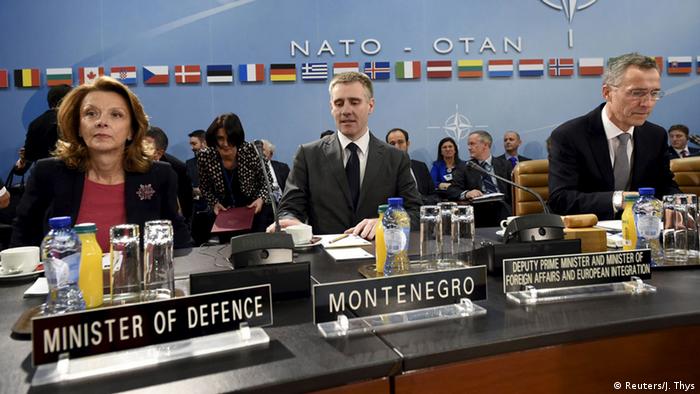 In a widely anticipated move, NATO foreign ministers gathered in Brussels on Wednesday and invited the former Yugoslav republic to join the alliance. It's a step that is likely to increase tension with Russia.

"NATO foreign ministers have just taken the historic decision to start accession talks for Montenegro to become the 29th member," NATO Secretary-General Jens Stoltenberg said. "This is the beginning of a very beautiful alliance."

Joining the alliance entails defense reforms and integration with NATO defense structures, all of which could take several months to complete. All NATO members and the Montenegrin parliament must approve final accession.

"We are fully aware that the invitation is not the end of the process, but the beginning of a new one," Montenegrin Foreign Minister Igor Luksic said after the decision.

The invitation to open accession talks, the first since 2009 when Croatia and Albania joined, signals that the alliance is still willing to expand despite concern in Moscow that NATO is creeping into what it deems to be its sphere of influence.

It also sends the message that Russia does not have a veto over NATO expansion as tensions between the bloc and Moscow remain high due to the conflict in eastern Ukraine.

Responding to the decision, Kremlin spokesman Dmitry Peskov said the further expansion of NATO to the east could trigger retaliatory measures from Russia.

"Moscow has always noted that the continuing expansion of NATO [...] to the east cannot but lead to reciprocal actions from the east, that is from the Russian side, in the interests of providing security and supporting the parity of our interests," Peskov told reporters.

Russia has strong tourism and investment ties with Montenegro, which was part of a federation with Serbia, an ally of Moscow.

Last week, Russia described Montenegro's NATO bid as a "serious blow by the Euro-Atlantic bloc," and Russian Foreign Minister Sergei Lavrov said last September that any expansion of NATO was "a mistake, even a provocation."

There are reports Russia has tried to back protests and opposition against Montenegro's NATO bid, and the Kremlin is likely to attempt to scuttle the NATO process.

Showing there may be costs to Montenegro, Russia on Wednesday threatened to cut all joint projects if it joins NATO.

Bosnia, Macedonia and Georgia would also like to join the alliance, but their bids have not made enough progress for an accession invitation.

A decision on Georgia is likely to be put off for some time due to Russian-backed breakaway states Abkhazia and South Ossetia.

Bosnian and Macedonian membership would surround Serbia with NATO states, a major concern for Russia, which fears Serbia could fall into the Euro-Atlantic orbit.

Russia has long resented NATO's intervention in Kosovo, which led for the one-time Serbian province to break away from Serbia.

NATO and Russia suspended all cooperation following the annexation of Crimea last year and conflict in eastern Ukraine, bringing tensions to their highest level since the end of the Cold War.

In contrast to the harsh tone taken by Kremlin spokesperson Peskov, Russian Foreign Minister Sergey Lavros said Russia would be willing to resume the talks, saying Russia "would listen to what our NATO counterparts have to say."

Germany has sought to deescalate tension between NATO and Russia over Ukraine and avoid unintended accidents, such as the downing of a Russia jet by Turkey.