Dark days on Crimea: Russia and Ukraine rattle sabers | Europe| News and current affairs from around the continent | DW | 01.12.2015

Electricity cables cut, no trade between Ukraine proper and the Crimean Peninsula, no gas supply: Once again Ukraine and Russia seem headed for confrontation. The US and Europe fear for the future of the Minsk Protocol. Crimea has recently experienced its darkest hours in memory - literally. The peninsula, annexed by Russia in 2014, was left in a state of emergency, deprived since November 22 of electricity from the Ukrainian mainland after persons unknown blew up a number of electricity pylons in southern Ukraine. Several failed attempts had already been made in previous weeks. Russia is building an energy bridge to Crimea from its own mainland and laying electricity cables under the Black Sea. However, according to experts in the Russian media, these will only cover part of Crimea's energy needs.

For the first time in the 21 months since Crimea was annexed, the region's 2.3 million people are finding out just how dependent their peninsula is on mainland Ukraine. The experience is a painful one. Electricity supply is probably the only leverage Ukraine has, but it is very powerful leverage, and until now Kyiv had refrained from using it. However, for over a year no fresh water has flowed from Ukraine's Dnipro river to Crimea, which has a dry climate, and there are no trains or buses traveling between the mainland and the peninsula.

A week ago, the Ukrainian government also cut trade links with Crimea, making official something activists had been seeking to enforce for months. The "blockade" began in September, with activists stopping trucks delivering Ukrainian goods to the peninsula.

Crimean Tatars are seen as the driving force behind the blockade. This is a pro-Ukrainian minority of around 250,000 people who live in annexed Crimea. The Crimean Tatars complain of persecution by Russian authorities: They say their countrymen have been arrested, abducted and murdered. Their leaders living in the Ukraine are not allowed to travel to Russian-controlled Crimea. Last Thursday, a group of Tatars obstructed repair work for the damaged electricity pylons and called for the release of their fellow activists in Crimea.

The blockade is controversial in Ukraine. Some say the government should have imposed one much earlier. They criticize President Petro Poroshenko for failing to present a concrete plan for returning Crimea to Ukraine. Supporters of the blockade write on social media that activists must now wage a kind of "partisan war." Critics, however, warn that this is more likely to turn Crimeans against Ukraine. 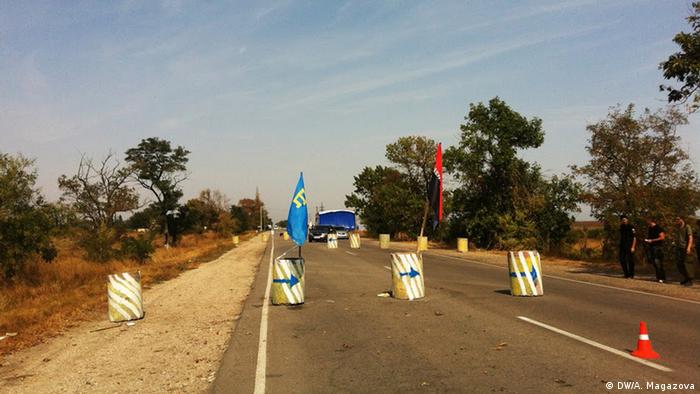 Russia responded to the emergency in Crimea with marked restraint. The problems would be resolved, Russian president Vladimir Putin said on Wednesday. He merely accused the Ukrainian leadership of tolerating the escalation of the situation and not speaking out. Russian Energy Minister Alexander Novak threatened to stop supplying coal to Ukraine in response to the energy blockade of Crimea. Ukraine's government has been buying coal from Russia ever since large areas of the country's eastern mining region, Donbass, fell under the control of separatists, who some believe are aided by the Kremlin.

As November draws to a close, Crimea's lack of electricity is not the only example of fresh tension between Kyiv and Moscow. Russia turned off its gas supplies to Ukraine last week, for example. The reason: no prepayment from Kyiv. Ukrainian officials, however, say the country doesn't need Russian gas at the moment.

Airspace is another field of conflict. Since last Thursday, Russian planes have been banned from crossing Ukraine. The reason given by the government in Kyiv was an "intensification of the military and political situation." Ukraine had already banned Russian airlines e a month ago, and Russia responded in kind, meaning that there is no air traffic whatsoever between the two countries.

The latest aggravation to already tense relations follows a renewed escalation of violence in eastern Ukraine. The ceasefire agreed in September between separatists and Ukraine's army was violated on an almost daily basis in November, with each side blaming the other. Observers warn that this is threatening to scupper the Minsk Protocol.

Given the electricity crisis in Crimea and the stoppage of gas deliveries, Gernot Erler, the German government's special coordinator for Russian policy, blames Ukraine. "We are very worried about this escalation, which was obviously brought about by Kyiv," the Social Democrat politician told the Neue Osnabrücker Zeitung, warning that it could have a negative effect on the implementation of the Minsk agreement.

Andriy Melnyk, Ukraine's ambassador to Germany, expressed astonishment at these remarks. Germany should respond so actively to "daily human rights abuses in Crimea and in the east of Ukraine," Melnyk told DW. "For many activists and representatives of the Crimean Tatars, it has become clear that the Crimean question is gradually disappearing from the world policy agenda," he said. The diplomat rejected the accusations leveled against Ukraine. According to Melnyk, it is this "sense of hopelessness" that is behind the latest events.