Russian aggression in focus of NATO meeting | World | Breaking news and perspectives from around the globe | DW | 01.12.2015

NATO ally Turkey has gotten fresh reassurances from the alliance, amid escalating tensions with Russia. NATO's secretary general also called for an update to the "rulebook" governing international military activity. 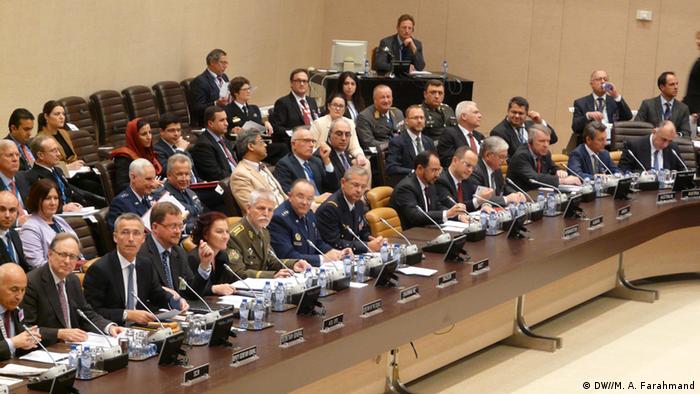 NATO is not directly involved in the international coalition fighting the Islamic State, but Turkey's downing of a Russian warplane brought Russian behavior in Syria - and its risks - to the fore of the foreign ministers' agenda.

In the week since the jet incident, Turkey has received full backing from NATO that it was within its rights to shoot down the Russian warplane that Ankara says entered Turkish airspace on November 24. As Moscow demanded an apology, Turkish Prime Minister Ahmet Davutoglu said his government had not made a mistake for which an apology should be given.

"Our military did their job when they protected our airspace," the premier said. "Our airspace and our border is an issue of national security - but more an issue of dignity for us." He thanked NATO Secretary General Jens Stoltenberg, standing alongside him, for the solidarity.

Speaking ahead of the summit, US Ambassador to NATO Doug Lute said that American intelligence corroborates the Turkish version of events. "The airplane was in Turkey; it was engaged in Turkey; it had been warned repeatedly," Lute said. Prior to these remarks, the US government had been slow to publicly endorse Turkey's version of what happened.

Lute dismissed Russian President Vladimir Putin's claims that the US, through an information-sharing agreement reached for Syrian operations, had been provided with this plane's flight information. "What I can tell you for sure is that there was no flight plan issued for a violation of NATO airspace," he said. "And had such a flight plan been issued, we would have advised against it ... because of the potential for the sort of thing that we saw happen, which is very dangerous, unnecessary and irresponsible."

Stoltenberg said, "We all now should focus on how can we can calm tensions, de-escalate and to avoid that this is a situation which creates new problems and is undermining, for instance, the efforts to try to find a political negotiated solution to the crisis in Syria."

But beyond managing this crisis, the NATO chief says he wants to change the international norms governing military activity in order to provide "more predictability, more transparency and to enhance mechanisms for risk reductions to avoid incidents, accidents."

Russia's snap exercises of thousands of battle-ready soliders who have appeared quickly and unannounced in the Ukrainian border area, plus persistent buzzing of NATO airspace over the past 24 months, has raised questions about the viability of existing accords.

In an op-ed published in seven European papers last week, Stoltenberg said turbulent world affairs require more efforts to restore long-term stability, and for that, he argues, there must be a modernizing of what he called the "rulebook of European security."

Stoltenberg particularly wants a re-examination of the Vienna Document, an agreement made under the auspices of the Organization for Security and Cooperation in Europe (OSCE). This obligates governments to notify the OSCE when, for example, they plan military activities of a certain size and scope.

NATO, the US and other governments have expressed repeated concerns that Russia, a signatory, is not following the Vienna requirements and informing other international actors in advance about its movements. Stoltenberg says he wants to close "loopholes" remaining in the agreement.

Daniel Keohane, a senior researcher at the Center for Security Studies (CSS), Zurich, says enforcing such an update poses a dilemma for NATO. "No doubt it is a good idea to upgrade rulebooks, all the more following the Turkish-Russian incident," he said. "But Russia's recent behavior does not breed confidence that it will stick to those rules.

In the meantime, allies late Tuesday issued a joint statement on "assurance" measures for Turkey. Stoltenberg stressed these measures have been in the works since before the incident with Russia. "In view of the general volatility in the region," the statement reads, "These are being further strengthened."

The United States recently moved some fighter jets from the UK to Turkey, and the British government will also provide extra air support. Denmark and Germany say they'll send ships to the NATO mission in the eastern Mediterranean.

"We remain determined in a spirit of 28 for 28, to continue developing additional NATO assurance measures," the alliance said in a statement, adding that a package of more support for Turkey should be finalized within weeks.

Opinion - NATO: The unwanted war against IS

The conflict between Turkey and Russia should not stand in the way of a common alliance against IS, says DW’s Christoph Hasselbach. (01.12.2015)

Moscow has accused Ankara of shooting down a Russian jet to protect supplies of oil for the "Islamic State" in Syria. The war of words reflects fractured relations between the two countries since the jet incident. (01.12.2015)

NATO officials say Montenegro is expected to join the military alliance later this week. The news comes as the 28 member nations prepare for a meeting in Brussels to discuss security issues. (30.11.2015)