Montenegro′s fractious opposition takes to the streets | Europe | News and current affairs from around the continent | DW | 16.11.2015

Around 3,000 people in Podgorica have protested against the government of Milo Djukanovic, convinced that their voices on the streets are louder than their ballots. Nemanja Rujević reports from Montenegro. 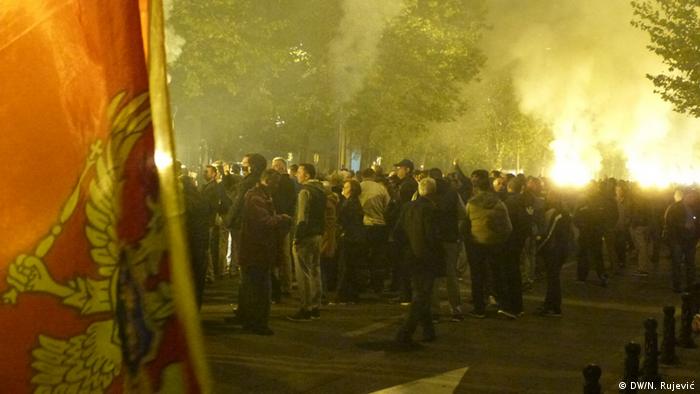 "Milo, you thief," the crowd chants in the Republic Square in the Montenegrin capital, Podgorica. Then a speaker says the word "thief" is too weak to describe the evil that Prime Minister Milo Djukanovic has caused during his 24 year rule.

"Milo, you murderer," retort the spectators immediately. "You are this dictator's nightmare," shouts Slaven Radunovic, one of the leaders of the opposition Democratic Front, to the crowd from the stage. More speeches follow, punctuated with the words "dictator" and "regime" to keep the demonstrators' attention.

The Djukanovic era has already lasted far too long, the people here say. They describe corruption and nepotism, from the distribution of jobs through the grace of the party to the economic misery in which many of the 620,000 citizens of this small Balkan country live.

The current prime minister was just 26 when in 1989, he eked out an important role in the Communist Party of Yugoslavia in the so-called Anti-Bureaucratic Revolution. After Yugoslavia broke up in 1991, he shaped Montenegro's fate. He was chief ideologue of its 2006 split with Serbia.

Djukanovic's dominance of the political landscape has become so self-evident that his rivals seldom make the effort to speak his name. They simply say "he." 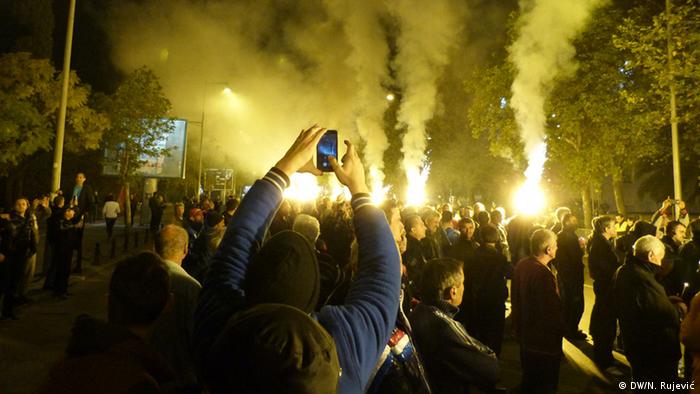 "We want to put an end to this hell and this slavery. The streets brought him to power; the streets will disempower him," Mirela Dobljanic hopes. The fragile pensioner has to get by on just 250 euros ($270) a month. "How shall I pay for my medication?"

NATO is a taboo word

A Montenegrin and a few Serbian flags are flying this evening; small groups sing nationalistic Serb songs. The protests are being led by a pro-Serbian party that still curses Montenegro's independence and vehemently opposes the Balkan country joining NATO.

Djukanovic has declared membership in the alliance to be his highest goal: many prominent faces campaign for it from billboards. Djukanovic treats the anti-government demonstrations as an attempt to spoil NATO membership just before the country receives an invitation to join, which observers expect at the beginning of December.

But the speakers at the demonstration refrain from using anti-NATO slogans. The reason: There are also political powers in the Democratic Front who favor Atlantic integration.

After the recent polls, the alliance advanced to become the strongest opposition group, but after a lot of disputes and splits, polls suggest it can only count on around 8 percent of the vote. The speakers call for an interim government that should have the task of organizing the country's first really free elections. Other opposition parties don't support the demonstrations. 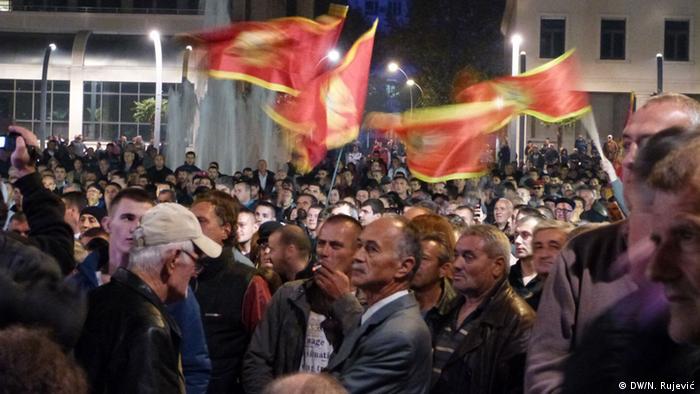 Crowds waving flags during an anti-government demo in Podgorica

"But they are the only way," says Aleksandar Jankovic. The young father of two has no job and no trust in the institutions. "Our rulers cannot be deposed through elections. The situation is the same in Romania or in Arab countries, where the people are forced to go out onto the streets. As God wishes, this is also how it will be for us."

There is still evidence of damaged windows from the riots at the end of October, when around 10,000 demonstrators took to the streets. The official version of events was that hooded hooligans attacked the police first. But some social network users believe the violent perpetrators were government provocateurs.

The protests ended in chaos with dozens of injuries. Three protest leaders are to be charged with "calling for the violent overthrow of the constitutional order" and attacks on the police, as soon as their parliamentary immunity is lifted. On the other side, only two police officers from the notorious anti-terror unit are being investigated, despite video pictures showing security forces beating citizens.

This time, there were no acts of violence. A human chain around the "dictator-occupied institutions" - that was opposition's plan. Some stood with candles in the chain, many with light torches.

"We are so many that we could also encircle the Beijing government quarters," one opposition deputy called at the end. The statement is more an example of exuberance, as Beijing would be too big for the 3,000 demonstrators.

But for the government quarter of the tiny state it was enough - the government building, the parliament and the presidential seat in the center of Podgorica are located next to each other. Were a few thousand people too few to pressure the undisputed leader into changing his mind? Or were they not so few at all, in a country where most people are apathetic and have become apolitical because they are convinced that change is impossible. 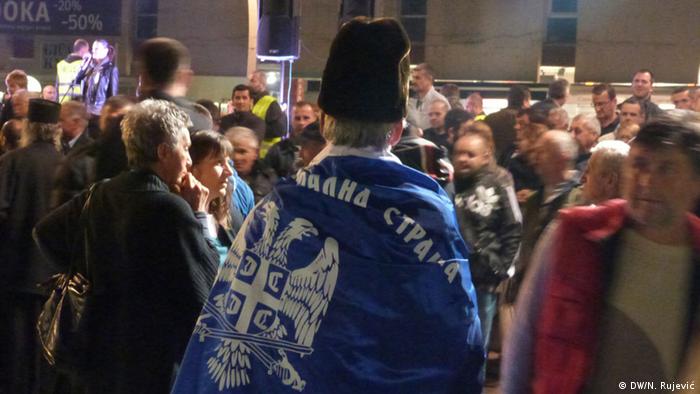 The protests in the Montenegrin capital went off peacefully

Blazo, a young political scientist, who just came by, says he doesn't know the answer.

"I think the swing has already been lost. There are always new protests. It's the same as if you suffer from sleepiness and you're always setting your alarm clock back another ten minutes."

Quickly and quietly, the crowds disappeared from the center of Podgorica - with the message that the protests would continue in other Montenegrin cities. The police, keeping a low profile in side streets, packed up their shields and cans of tear gas. This time there was no deployment.

Montenegro: Caught in the midst of the east-west conflict

Thousands in Montenegro are demanding the ouster of Prime Minister Dukanovic. People are protesting against corruption and a bid to join NATO. Dukanovic has rebuffed the criticism and suspects a conspiracy behind it. (23.10.2015)

Police in Montenegro have fired tear gas at opposition protestors outside the parliament building. They were calling for the resignation of Prime Minister Milo Djukanovic's government. (24.10.2015)

Clashes as thousands call for resignation of Montenegro government

Several thousand protesters have marched through the streets of the Montenegrin capital, demanding the resignation of PM Milo Djukanovic and the formation of an interim government. Police have responded with tear gas. (19.10.2015)