Police in Montenegro have fired tear gas at opposition protestors outside the parliament building. They were calling for the resignation of Prime Minister Milo Djukanovic's government. 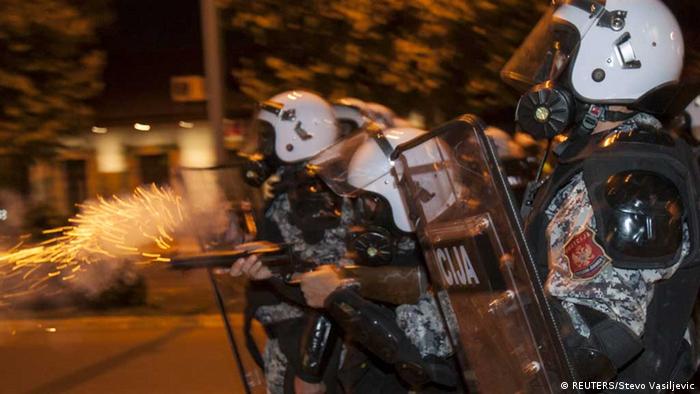 Tear gas smoke spread through the area, according to witnesses who said several shop windows were broken.

Afterwards, the government promised citizens via Twitter that "Podgorica will function normally tomorrow."

Prime Minister Milo Djukanovic has been in power for 25 years, and the opposition have accused him of authoritarian rule. On Saturday, as the protesters gathered at a central square in the capital, opposition leader Nebojsa Medojevic shouted "the dictator must fall."

"More than 25 years in power would be too much even if he was Mahatma Gandhi and not this thief," 30-year-old protester Raso told the AFP news agency.

The protesters called for free and fair elections to be organized by a transitional government in place of Dukanovic.

"Montenegro has been destroyed by corruption, crime and the dictatorship of one person," said Nebojsa Medojevic of the Democratic Front, the main opposition bloc.

The prime minister has rejected calls for his resignation, saying instead he would call early elections after December's meeting of the North Atlantic Treaty Organization (NATO), when Montenegro is expected to be invited to join the military alliance of 28 western nations.

Some of the demonstrators carried barriers with the slogan "No to NATO." Many in the opposition are opposed to joining NATO, which practices a system of collective defense in response to an attack by any external party. Montenegro has historic ties to Russia.

Zoran Kovacevic, a 57-year-old unemployed electrician said on Saturday: "we are against NATO but most of all we are hungry."

A week ago, police used teargas to break up a demonstration by several hundred activists who were trying to protest outside parliament despite a ban.