Voters have doubts about Chancellor Angela Merkel a year after she assured the country, "We can do this," concerning the migration crisis. A new poll shows her popularity sagging as a populist party continues to benefit. 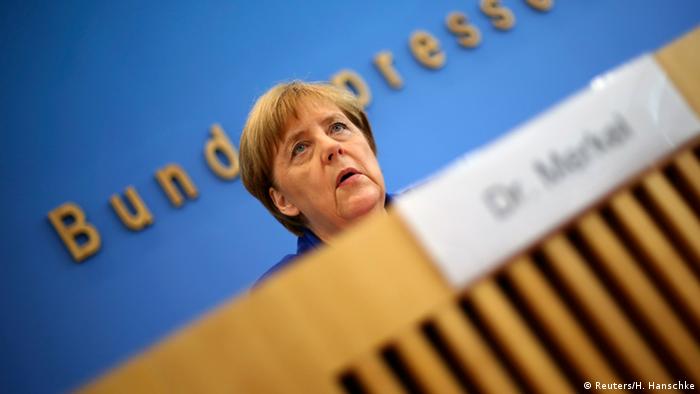 The mood in Germany remains worrisome for Angela Merkel's Christian Democratic Party (CDU), according to the most recent "Germany trend" survey by pollsters Infratest dimap.

Some 45 percent of respondents said they are satisfied with the job Merkel is doing - the lowest number recorded since 2011.

Proposals involving dual citizenship restrictions, a burqa ban, more police and speedy deportations: the populist Alternative for Germany (AfD) found issues it had been focusing on for months at the center of national debate.

The opinion poll shows the interior ministers' efforts weren't as successful as they had hoped. The CDU lost another percentage point, and is now down to 33 percent - apparently, regaining people's trust is not that easy. The AfD, on the other hand, won 2 percentage points, overtaking the Green party and making it the third-strongest party in the country, just like in the first half of 2016, before infighting in the AfD leadership caused ratings to drop. 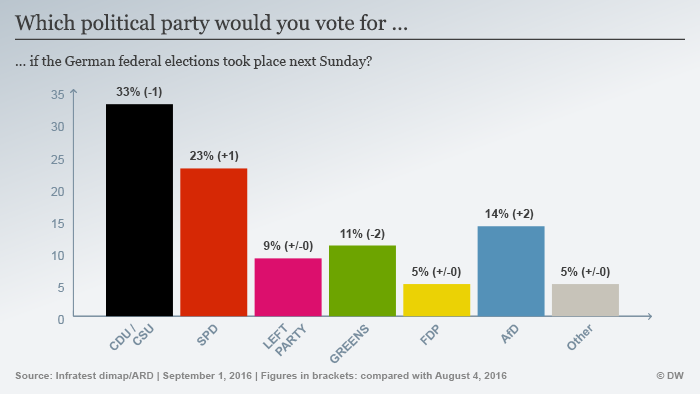 All the same, most Germans still trust the CDU to come up with solid asylum and refugee policies. But 27 percent of Germans say they feel none of the country's political parties have convincing solutions to the problem - a rather high figure.

Only 7 percent say they're confident that the AfD - which has yet to prove its authority as part of a government - has the right answers. State interior ministers agreed on a limited burqa ban at their meeting last month: It's prohibited to wear a veil that covers the entire face and body in places where a person must be identifiable in public - on the road, in court, in schools and at demonstrations.

The "Deutschland Trend" poll says, however, that these measures don't go far enough for many Germans. One out of three respondents agrees with the interior ministers' decision, but one out of two wants a total ban, like in France and Belgium. Only 13 percent are opposed to a ban. 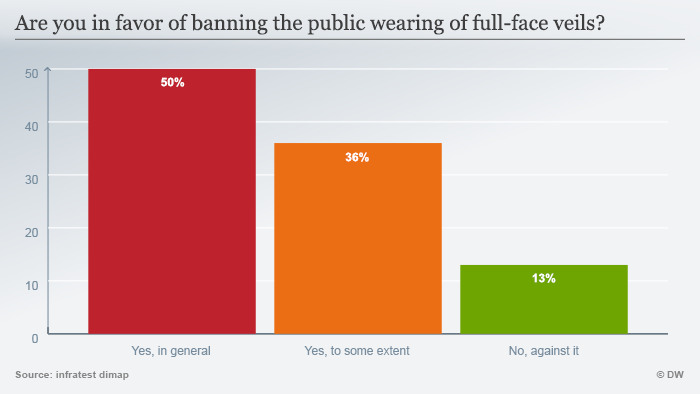 A year from now, Germans will be voting for a new parliament, and a chancellor. Asked whether she would run for the chancellorship again, Angela Merkel - in office since 2005 - has been evasive. She is now ranked just sixth on the popularity scale among German politicians. The general polarization evident on the issue of refugee policies is reflected in the question as to another term for Merkel: a majority would rather not see her as chancellor once more. 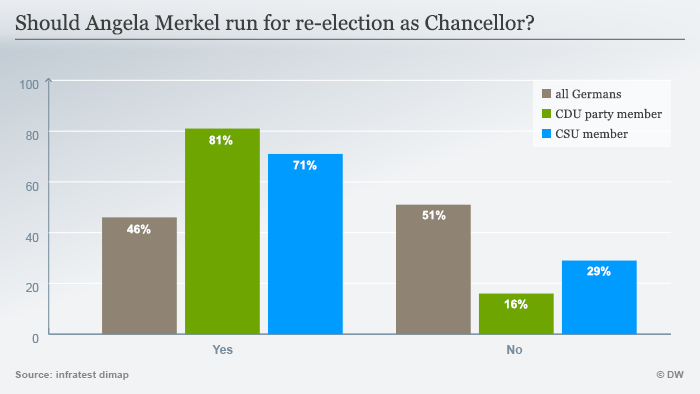 At least in her own party, members still have her back to a large degree, while her Bavarian Christian Social Democratic (CSU) sister party has been wavering, with one out of four opposed to Merkel aspiring to a fourth term in office. The party has even threatened to send a candidate of its own into the race next year.

Prospects are not rosy for what is alleged to be Merkel's possible preferred future coalition partner, the Greens Party. According to opinion polls, the Greens wouldn't be able to garner enough votes.

Germany's economic situation is downright good despite all prophesies of doom. There are plenty of jobs that flush money into the social security funds, tax revenue is at a record high and there's even surplus.

Infratest Dimap asked Germans what the government should do with the extra income. 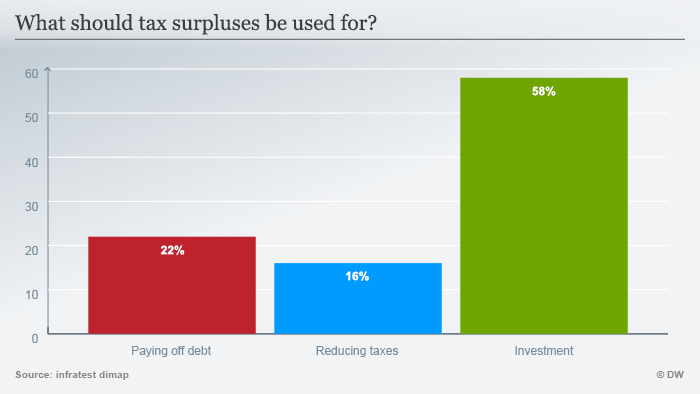 Invest the money, 58 percent of the respondents said - for instance in maintaining and developing infrastructure. Only 16 percent called for tax cuts. The Germans, it would seem, are a cautious people keen on preserving pubic property. One out of five respondents would like to see the government reduce debt, which after all amounts to more than two trillion euros ($2.2 trillion.

In a test run ahead of the election campaign next year, both the Social Democrats (SPD) and the CDU/CSU have hinted at various tax cut schemes. But it appears Germans don't care - the refugee issue still seems to be much more relevant.

Merkel stands firm: 'we can still do this'

German Chancellor Angela Merkel interrupted her holidays and took the hot seat at a press conference, facing questions on her refugee policies and the recent deadly attacks in Germany. (28.07.2016)

Opinion: We can't do this!

Exactly one year ago, Angela Merkel opened the doors to hundreds of thousands of refugees and pronounced her famous phrase: "We can do this!" But DW's editor-in-chief Alexander Kudascheff does not agree. (31.08.2016)

Opinion: We can do this!

First, we discovered the idea of a "welcome culture," then came the doubts: "Can we do this?" A year after Germany started welcoming refugees, Dagmar Engel says: "Yes, we can." (31.08.2016)