Merkel stands firm: 'We can still do this'

German Chancellor Angela Merkel interrupted her holidays and took the hot seat at a press conference, facing questions on her refugee policies and the recent deadly attacks in Germany. 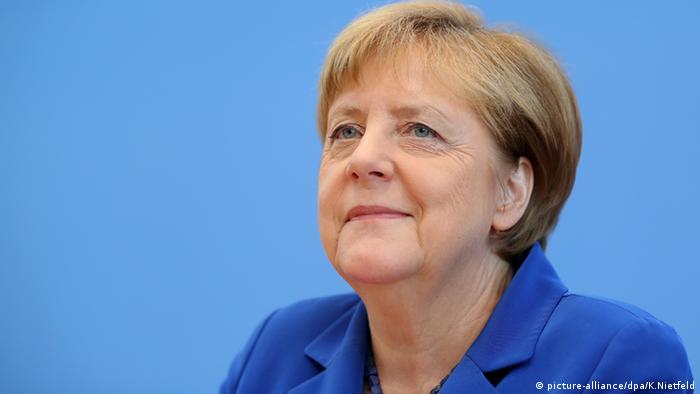 "We can do this" ("Wir schaffen das"), Angela Merkel said one year ago when she took the stage at her traditional summer press conference in Berlin.

It was her controversial declaration that Germany, in her opinion, was able to cope with the huge influx of refugees that came to the country that summer – and the start of her so called "welcome policy."

In total, more than one million refugees arrived in the country in 2015. Merkel has been criticized for her comment ever since by right-wing populists and members of her own coalition alike.

After the string of recent attacks in Germany (three carried out by refugees), the pressure on Merkel is growing stronger. The populist AfD is attacking her policies of "uncontrolled immigration" as irresponsible; her sister party, the Bavarian CSU, has also sharpened its rhetoric.

But those who expected a turnaround of her policies after the recent violence were persuaded otherwise at her press conference on Thursday. As calm and collected as ever, Merkel took the stage and emphasized: "We can still do this. We can manage this historic challenge."

This time her optimistic comment did not only refer to the migrant crisis, but also to Islamist terror. "Let me be clear, we are at war with Islamic State; we are not at war with Islam," she said.

Merkel: 'A slap in the face'

Merkel presented herself as a voice of reason

In the 90-minute press conference, the chancellor brushed aside calls to reverse her policies and made very clear that she had no regrets. Presenting herself as a voice of reason, she added that the recent attacks were "shocking and depressing," but not a sign that the government had lost control.

"We have achieved a lot in the past 11 months,"she said. "The two men who came to us as refugees and are responsible for the deeds in Würzburg and Ansbach have slapped in the face the country that took them in," Merkel said in her opening statement. "It mocks the volunteers that are willing to help and it mocks others that are seeking our help to escape from violence and war; those who want to live in freedom."

Her political decisions, she stressed, would not be guided by fear. "I am deeply convinced that we cannot let our way of life be destroyed," Merkel said, recalling the recent attacks around the world in Orlando, Turkey, Nice and Germany.

Merkel: 'Not under-worked this summer'

Her comments follow a chaotic week in Germany: An asylum seeker stabbed people on a local train in Würzburg, an asylum applicant from Syria blew himself up outside a music festival in Ansbach. And in Reutlingen a refugee stabbed a woman to death. The most deadly attack of recent days, though - a shooting rampage in Munich that left nine people dead and more than 30 wounded - was carried out by a German of Iranian origin.

It has been a hectic summer – the Brexit referendum, the attempted coup in Turkey, terror attacks in France, and a recent wave of violence in Germany – but Merkel shows no sign of that. 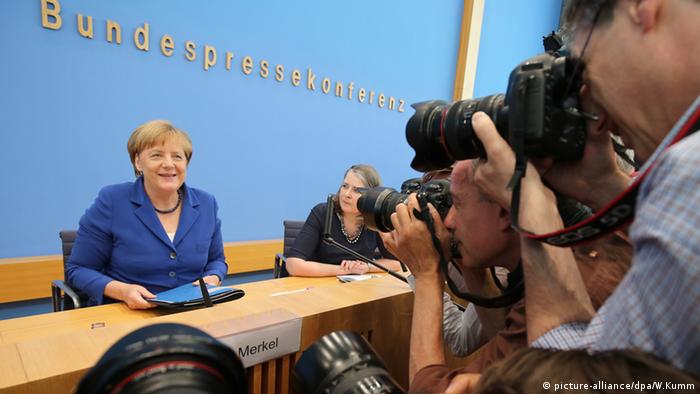 "At night, I like to go to bed and sleep, but I feel the challenges. Let me say it this way, I am not underworked," she said when asked about ruling in times of crises.

The last time, the German public heard directly from her, was last Saturday, one day after the shooting rampage in Munich. After that she went on vacation to eastern Germany, the Uckermark region, just a few hours away from Berlin, where she grew up.

Political pressure and criticism surrounding her absence from public debate after the attacks in Germany are among the reasons why Merkel interrupted this summer holiday and moved up the large press event she usually holds later in the summer.

Journalists also asked Merkel several times if she was running again in the general election in 2017, but she made clear that she would not answer that question at this point. She also rebuffed a comment about the possibility of her stepping down amid the political pressure.

Germany holds three state elections in September. The populist Alternative for Germany (AfD) is using the attacks to score a political point and oppose Merkel's policies.

A little over a year from now, Germans will go to the polls in the general election. Merkel's decision to run again is likely going to depend on how the refugee situation unfolds. That her comments on Thursday appeased her political opponents is unlikely. But in the face of the recent attacks, her remarkable calmness might have eased some fears in the general public.

German Chancellor Angela Merkel is set to hold a press conference in Berlin after keeping a low profile as a wave of violent attacks shook Germany. Merkel is also taking flak for her refugee policy amid the unrest. (28.07.2016)

German Chancellor Angela Merkel has faced the press after keeping a fairly low profile amid several attacks in Germany. She said that asylum seekers who commit attacks "mock" the country that welcomed them. (28.07.2016)