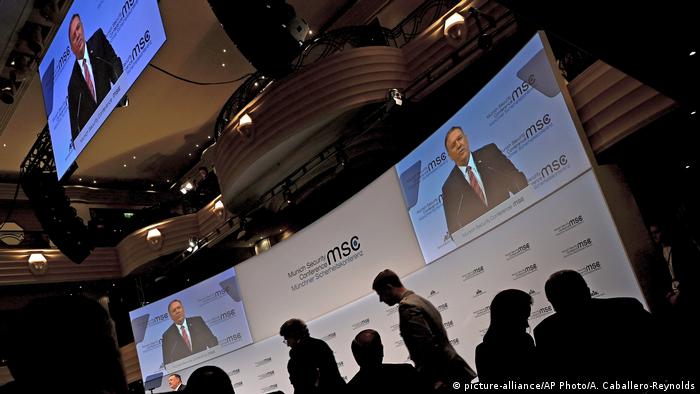 The United States has defended its leading role after NATO Secretary-General Jens Stoltenberg touted US-EU relations in his address at the Munich Security Conference on Saturday.

US Secretary of State Mike Pompeo defended against criticism that the US had retreated from the world stage.

"I'm happy to report that the death of the trans-Atlantic alliance is grossly exaggerated. The West is winning, and we're winning together," Pompeo said in a speech.

"We led 81 nations in the global fight to take out the ISIS caliphate," he said, referring to the "Islamic State" militant group. "Is this an America that rejects the international community?"

Pompeo was responding in part to comments from German President Frank-Walter Steinmeier who on Friday said the US rejected "even the idea of an international community" and was acting "at the expense of neighbors and partners."

DW's correspondent in Munich, Teri Schulz, noted a shift in policy from the White House, given Pompeo's remarks.

"It was very interesting to get the sense that he in a way is trying to talk the Europeans back into wanting to be trans-Atlantic partners after the US administration has done so much to turn them away," she said.

German Foreign Minister Heiko Maas, was keen to downplay talk of any potential rift between the US and Europe, as well as extolling the virtues of NATO, albeit an organization in need of reform.

"I think It would be a mistake to pit Europe against the US," Maas told DW. "We are in a security alliance that works, NATO. But it needs reform and we are discussing that now. We want to bolster the European side of NATO and to do that we first need to reach consensus in Europe."

Pompeo declares that 'the West is winning'

German Defense Minister Annegret Kramp-Karrenbauer told conference delegates that the West and its ideals were being challenged, and appealed for concrete actions to bolster security.

Europe, and Germany, "have a duty to become more able and more willing to act," she said. "We're still not doing enough."

"I want our actions to be better coordinated internationally, and I want them to be more visible. I want us to be able to follow our own interests and to stay on course, even when the going gets tough."

Kramp-Karrenbauer said efforts were underway to enhance the Bundeswehr's equipment and combat power, and called on Germany to become more "robust" in its overseas missions, including in Africa's Sahel region.

The defense minister also said she agreed with having a common European initiative in the Strait of Hormuz, rather than backing a US-led mission there, because "we do not think that maximum pressure is the right way to deal with Iran."

Ian Bremmer, president of the think tank Eurasia Group, said the West was "much weaker and more divided" than in the past, with a lack of alignment among European powers posing a serious problem.

Earlier, US Secretary of Defense Mark Esper criticized China for "seeking to use emerging technologies to alter the landscape of power and reshape the world in their favor,"  referring to telecommunications firm Huawei.

"Over time we have watched them seize and militarize islands in the South China Sea and rapidly modernize the armed forces," he said.

He said China is increasingly trying to co-opt state and local officials in the US and around the world, and to influence other countries in the Indo-Pacific region.

He also touched on fear of China's military development. "When it comes to their security gains, we should take the Chinese government at their word. They have said that by 2035, the military intends to complete its modernization, and by 2049, it seeks to dominate Asia as the pre-eminent global military power."

"If the West enjoys lasting prosperity and progress while the rest are mired in backwardness, multilateralism can never be truly implemented," said Wang.

"As a big country with 5000 years of civilization, China's modernization, which is being achieved through the hard work and wisdom of its people represents an inevitable trend in history. Given its natural conditions, China will not copy the Western model," he said, attributing "remarkable success" to the "path of socialism with Chinese characteristics."

"What we have chosen is peaceful development within our own country and mutually beneficial cooperation with the world," said Wang.

"Instead of provoking confrontation they [developed countries] should work together to maintain peace and stability," he said.

Qin Gang, China's vice minister of foreign affairs spoke confidently at the conference about his country's ability to contain the coronavirus epidemic.

He predicted that it will be over shortly and only with "short term and temporary" effects on its economy.

"When the epidemic is over, the subdued consumer demand will be released rapidly and the economy will rebound strongly," Qin added.

China's foreign minister also praised China's handling of the virus, and said that only 1% of diagnosed cases have been outside of China's borders. "The Chinese nation is a thankful nation," said Wang.

French President Emmanuel Macron touted the need to invest more heavily in the European economy. "We need to act faster at the European level," he said. "How can we invest faster? We need European initiatives," Macron said, citing the growth of 5G and cloud computing.

"China, on the other hand, invests enormous amounts of money. It's all public money that's invested. It's not necessarily clear what they're doing ... China is investing in its future and so is the United States. We are not fast enough."

"If China continues to rise and it continues to pursue policies aimed at developing its infrastructure, digital development, expansion and increasing its presence in the Atlantic and Pacific area, that will mean that the interest of the other major powers may be overtaken by China at some point, in economic terms. So we need to develop something to react to this development," Macron said.

He also warned that the West is "weakening," in reference to Pompeo's comments on the trans-Atlantic trade agreement. "There's an American policy that started several years ago and not just under this administration that includes a certain kind of withdrawal, of a rethink of its relationship with Europe."

Macron warned that Russia was seeking to "destabilize" Western democracies by interfering in elections and social media manipulation.

"Russia cannot keep blocking progress in the security council," said Macron, adding that more European coordination is needed. The strategy for Russia is not viable in a financial way. Russia has exploited our weakness and uncertainty in conflicts like Syria."

Cybersecurity experts at a summit in southern Germany have given a stark reminder about how vulnerable our digital future could be. Delegates heard that as 5G is rolled out, trust will be a critical element. (14.02.2020)

The Vatican and Beijing have announced a historic, provisional agreement on the appointment of bishops in China. But critics say the deal weakens the Catholic Church's moral authority. (22.09.2018)