Munich Security Conference: Afghan peace deal ′closer than ever′ | Asia| An in-depth look at news from across the continent | DW | 14.02.2020 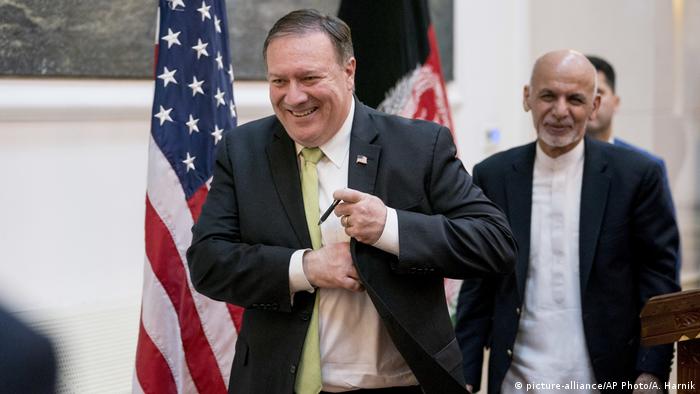 The 2020 Munich Security Conference kicked off on Friday amid reports that a peace deal between the United States and the Taliban could be sealed soon.

Pentagon chief Mark Esper told reporters in Brussels on Thursday that Washington and the Taliban had secured a seven-day reduction in violence in the war-torn country. US Secretary of State Mike Pompeo also said a "pretty important breakthrough" has been made in peace talks with the Taliban.

US President Donald Trump on Thursday said a peace agreement was "very close."

"I think we're very close," Trump said on a podcast broadcast on iHeart Radio. "I think there's a good chance that we'll have a deal ... We're going to know over the next two weeks."

Afghan officials have welcomed the progress in peace negotiations.

These statements have raised hopes for a peace agreement to end the 18-year-long war in Afghanistan. Pompeo and Afghan President Ashraf Ghani are scheduled to meet on the sidelines of the Munich Security Conference to discuss the recent developments.

Sources close to the Afghan peace process told DW that it is likely that Pompeo and Ghani will finalize details of the peace deal in Munich, with a formal announcement expected sometime next week.

Will the Taliban keep their side of the bargain?

The Afghan peace process has remained fragile and uncertain despite several rounds of talks between Washington and the Taliban in Qatar.

In August last year, Zalmay Khalilzad, the US special envoy for Afghanistan, and Taliban negotiators in Doha had almost agreed to a road map for peace in Afghanistan. But the Islamist group continued to launch attacks in Afghanistan, attempting to capture territories while killing NATO soldiers, which forced President Trump to temporarily end the talks in September last year.

Analysts say Trump is eager to sign a peace deal before the start of the US presidential election later this year.

"The US and the Taliban are closer than they ever have been before to finalize a peace deal, and that's because they appear to have agreed on the last remaining obstacle: the issue of how to reduce violence before a deal is signed," Michael Kugelman, a South Asia expert at the Washington-based Woodrow Wilson International Center for Scholars, told DW.

"The question now is if the Taliban hold up their end of the bargain and ease up on the violence over the anticipated seven-day period. It will be a test of Taliban cohesion and command and control to see if the insurgents' leadership can order the entire ranks to hold fire, or to reduce fire, over what would be a longer period than at any other time during the war," he added.

Sources close to the Doha peace process say the Taliban are likely to reduce violence between February 22 and 28. If successful, it will be followed by the signing of a deal between the US and the Taliban.

"Both sides have agreed on the same deal that they had almost finalized in September 2019," Sami Yusufzai, a London-based Afghan journalist and an expert on the Taliban, told DW.

"But the Taliban are demanding that the peace deal be signed right after the successful implementation of a seven-day reduction of violence," he added.

The Afghan government wants to be more involved in the peace negotiations with the Taliban, and that is likely to be on President Ghani's mind when he meets Secretary Pompeo at the Munich Security Conference.

Ghani secured a lead in the September presidential election's primary results, although the final outcome is yet to be announced. Any Afghan deal that undermines Ghani's position has a slim chance of succeeding.

The Taliban have so far refused to hold direct talks with the Afghan government, which they do not recognize.

Analyst Kugelman says the US will force the Taliban to hold an intra-Afghan dialogue before the signing of a peace agreement.

Nonetheless, experts say a successful meeting between Pompeo and Ghani in Munich could speed up the process. A reduction in Taliban violence and a possible Pompeo-Ghani agreement on the details of the peace deal now offer a better chance for an Afghan settlement than ever before.

The 2020 Munich Security Conference gets underway on Friday to take the temperature of the state of international peace and security. Delegates include French President Emmanuel Macron and Facebook's Mark Zuckerberg. (14.02.2020)