A new report shows the percentage of Indians living in poverty is half what it was a decade ago. But child poverty around the world is still rife, affecting nearly two-thirds of those under 18 in sub-Saharan Africa. 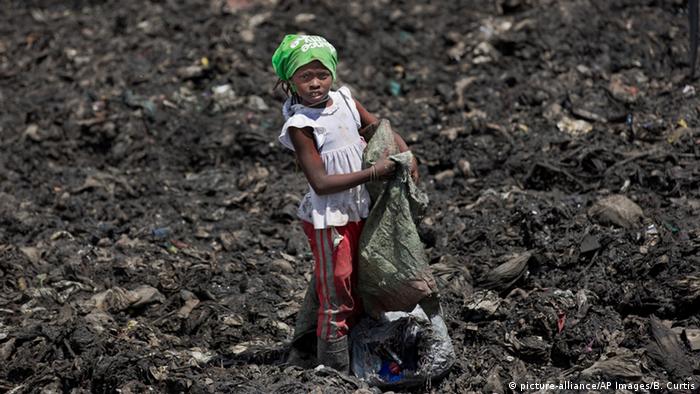 The latest Global Multidimensional Poverty Index (MPI) frames India as a success story, with newly analyzed data revealing the country has made rapid progress on reducing poverty over the last decade.

However, the report also presents some more troubling findings: Multidimensional poverty continues to pose a serious threat, particularly in sub-Saharan Africa, and half of the world's poor are children.

Published for the first time in 2010 by the United Nations Development Program (UNDP) and the Oxford Poverty and Human Development Initiative (OPHI), the MPI measures three main dimensions of poverty — health, education and living standards — in 104 developing countries around the world.

The report says around 75 percent of the world's people live in these countries, and one in four of them lives in poverty.

By looking at factors like malnutrition and access to energy, education and housing, the MPI aims to provide a fuller picture of how poverty impacts people than standard measures based purely on income. 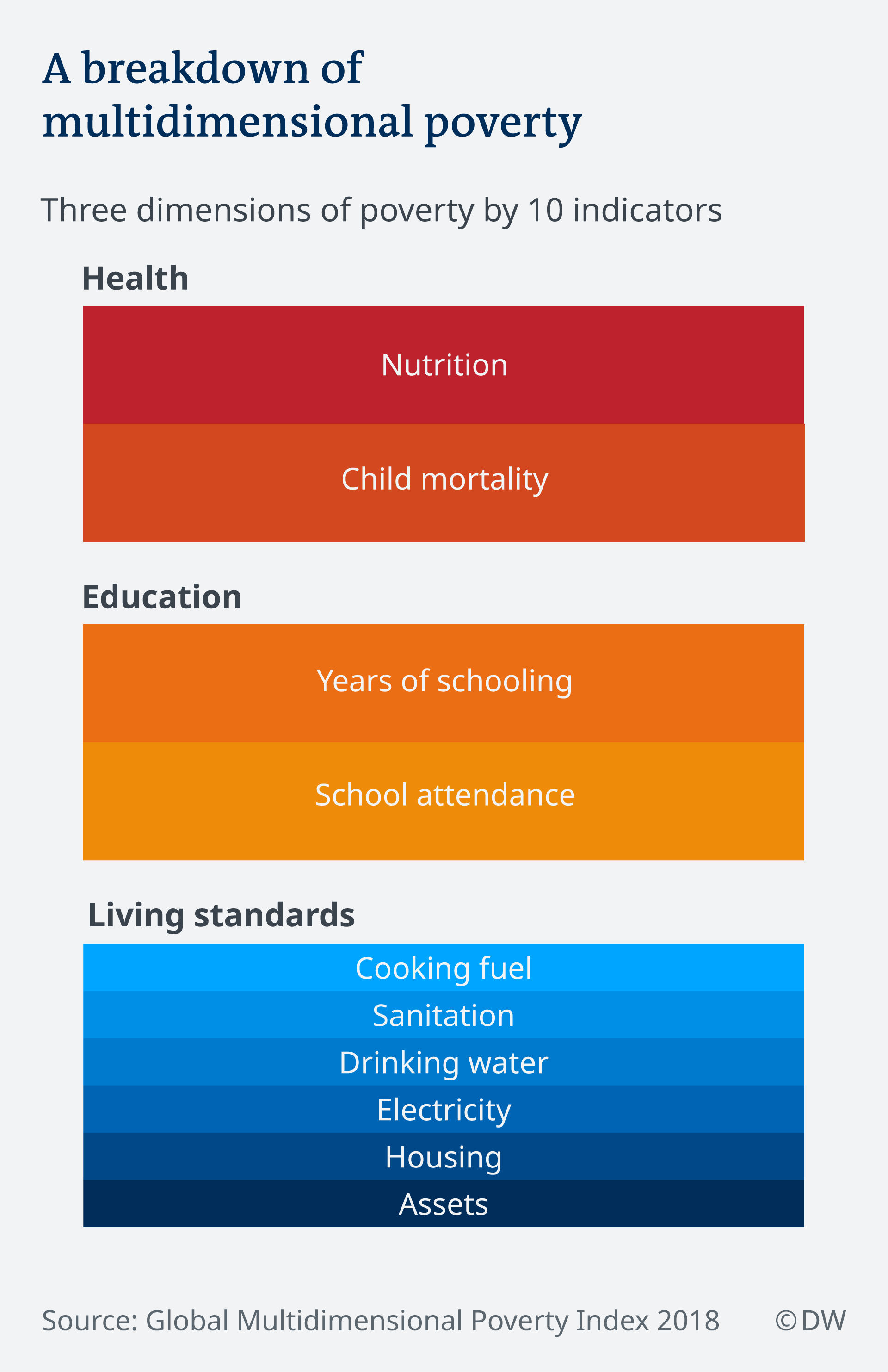 Although India still has the largest number of people living in multidimensional poverty in the world, the new report says the country has made considerable progress.

Between 2005/06 and 2015/16, India nearly halved its poverty rate, from 55 percent to 28 percent. OPHI director Sabina Alkire says this represents a historic shift on par with China's rapid poverty reduction over the last few decades. 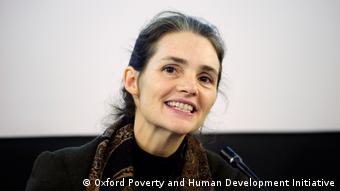 Sabina Alkire, director of the OPHI, says India is the focal country in this year's MPI report

"We were able to look at changes over time and it's a surprisingly happy story," Alkire told DW. "Even considering population growth, we've seen a reduction in the number of poor people from 635 million to 364 million. So, 271 million people have moved out of poverty in India. That's massive."

OPHI reports that the fastest poverty reduction in India was among the country's most vulnerable — including Muslims and residents of the poorest states — suggesting they are "catching up" with the rest of society.

But Alkire says the reasons behind these improvements remain unclear.

"[The report] is a call to the people of India to tell us what went right and how that can be sustained," Alkire says.

"Now, the ongoing challenge for India is that those groups still remain the poorest, they haven't overtaken others. But if this positive trend can be continued from 2015/16 into the future that would be a fantastic accomplishment in terms of reducing the human suffering," she added

One-third of children in poverty

Read more: Save the Children: More than half the world's kids at risk

While the report does not cover the entire global population, its authors estimate that half the world's poor are under the age of 18. One out of every three — or 662 million — children in the countries looked at in the study live in multidimensional poverty.

Poverty affects children even in richer countries. But the biggest challenges are in sub-Saharan Africa, where almost two-thirds of children are multidimensionally poor, including over 90 percent of all children in South Sudan and Niger. 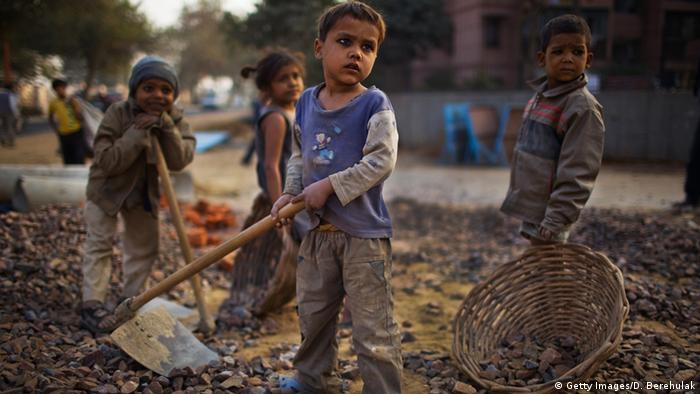 Although India has made significant gains in the fight against poverty, many children are still at risk of exploitation

The vast majority of the world's poorest people live in sub-Saharan Africa, where Nigeria (97 million) and Ethiopia (86 million) have the highest number of people living in poverty, according to the MPI.

Pillai says nongovernmental organizations (NGOs) have a greater role to play in poverty reduction in Africa than other parts of the world.

"Their development model is different," she says. "There, civil society still has a very large and significant role to play as a service provider. When the government is not able to really provide lasting services, development partners and NGOs come in to actually carry out large-scale programs on the ground."

Yet even across Africa, it's not all bad news. According to the UNDP's Human Development Index released last week, sub-Saharan Africa has seen some human development progress, including a seven-year-increase in life expectancy between 2006 and 2017. 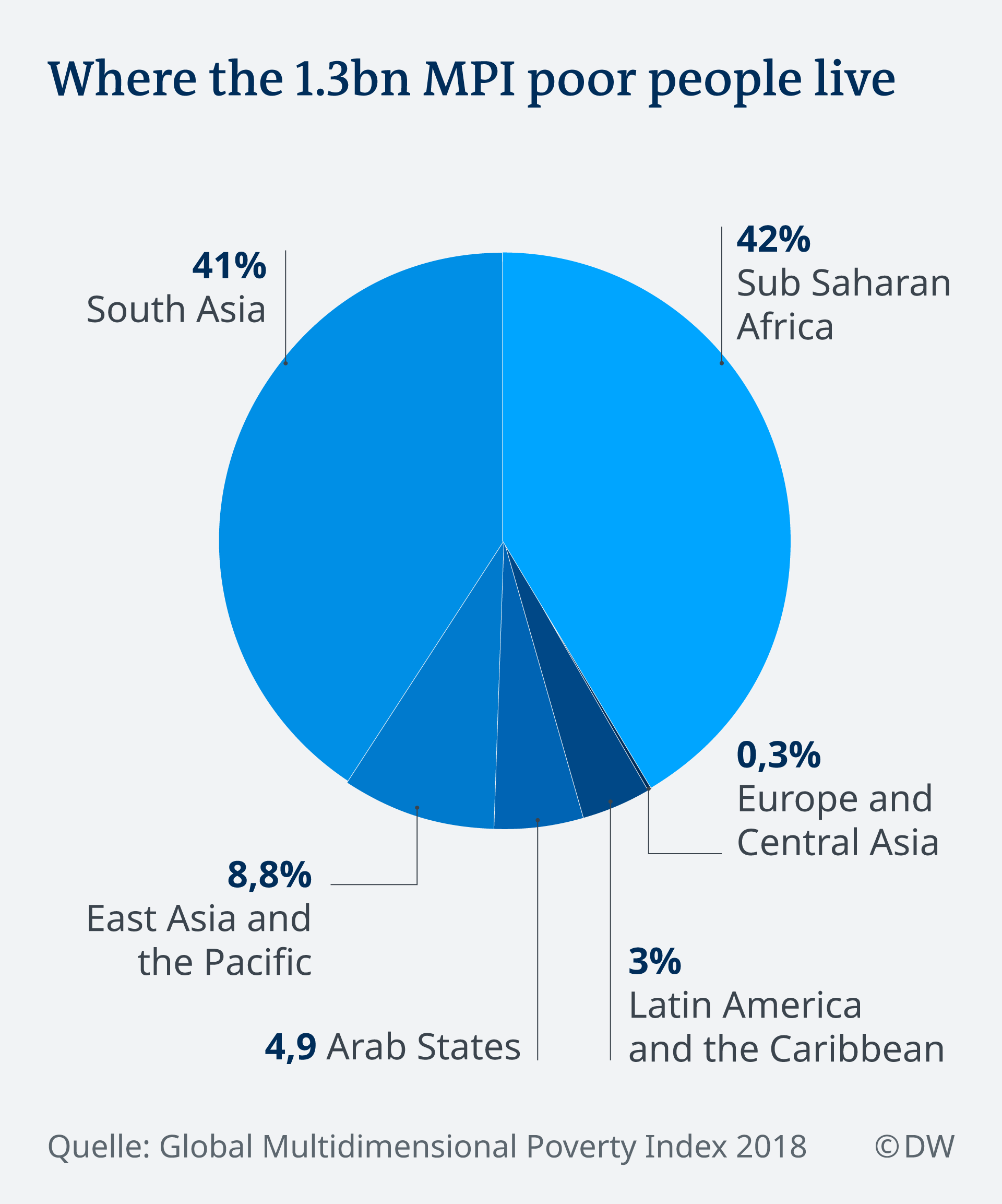 Alkire hopes policymakers will use the data collected for the latest MPI to inform measures to tackle poverty.

"[Governments] can really use it to get traction on the internal issues and to get monitoring which celebrates progress, making it very visible and politically salient," Alkire says.

"We want them to figure out what made change happen, [and ask] how can we make policies better," Alkire says. "Because it's their minds, their creativity and knowledge of the context that can do so much more than any one group from outside can do."

Save the Children India's Bidisha Pillai says the data is also useful for humanitarian and nonprofit organizations.

"We find it extremely helpful," she told DW. "It allows us to make strategic choices in terms of what are the specific themes that we need to focus on, as well as where we should [target] our programs in order to reach the most marginalized."

Around 180 million children are more likely to live in extreme poverty, be out of school or suffer a violent death than their parents, according to UNICEF. The World Children's Day report suggests things could get worse. (20.11.2017)

World in Progress: Half the world's poor are kids

World in Progress: Poverty and protection

World in Progress: Lifting China's rural provinces out of poverty