Men's rights activists are predictably out in force against Edeka's new ad, but the piece has feminists worried too. Edeka says the use of tired gender tropes was a way to say thank you to mothers. 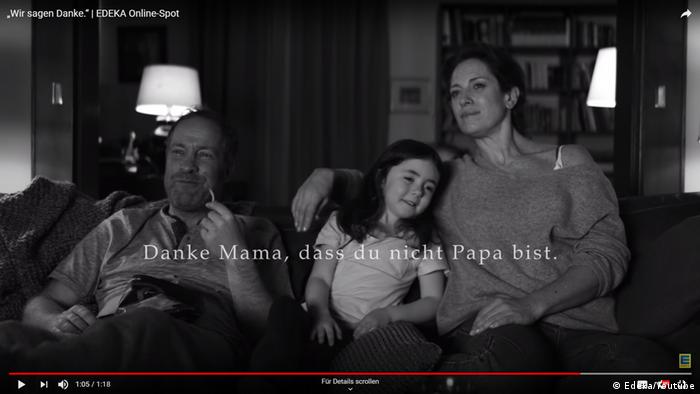 A German supermarket has been hammered by social media users and traditional media commentators after publishing a questionable Mother's Day advertisement.

The Edeka video is titled "We say thank you" and shows a series of black and white vignettes of incompetent fathers.

Throughout the scenes, children read the lines:

"Thank you. Thank you for always being there for me. You take care of me. You have a feeling for the right moment. I can always tell you everything. And you always listen to me. You're my role model and you encourage me whenever and however you can. Thank you for being so beautiful. And for being so sensitive."

It finishes with the punchline: "Mum, thank you for not being dad" and images of a loving mother caring for her daughter while the father chows down on what look like Doritos.

The ad has been slammed for perpetuating tired gender clichés, portraying men as hopelessly incompetent and mothers as caring and maternal.

Predictably, many Twitter users criticized the portrayal of men.

Some examples include: user Freylis writing that this was "the most disgusting, man-hating spot I've ever seen" and user NassinMoruk arguing that "if one were to make fun of mothers to the same extent, the outcry (of feminists) would be huge."

But the trope of the caring, doting mother copped similar criticism.

Stevie Schmiedel, a gender researcher and founder of the German branch of feminist lobby organization "Pinkstinks" campaigning against sexism in advertising, told news magazine Der Spiegel the spot was a "slap in the face for all emancipated women."

"We should encourage mothers in Germany to sometimes step back and trust the fathers more. Instead, they are still too often made to feel they are the more competent parent, that without them nothing would work at home. And when they go to work eight hours a day, they feel like incompetent mothers."

"Maybe the advertisers really thought they were doing something good for women on Mother's Day. But everything went wrong. The commercial is pseudo-progressive. It divides and intensifies the fight between the sexes. A poisoned Mother's Day present."

While Germany is largely seen as progressive on the international stage, traditional gender roles largely persist in the country, with men often the family breadwinner, taking much less parental leave than women, and even being ridiculed for wanting to take on a more domestic role.

The clip has garnered more than 1 million views on Youtube and widespread discussion of the Edeka brand with the controversy trending on Twitter.

The company told news agency DPA that "we didn't want to portray fathers badly but, in a somewhat exaggerated and humorous way, say thank you to all mothers on Mother's Day."

A half-naked Asian woman is sprawled across a pizza box. A black man is whitewashed in the washing machine. H&M is not the only company to attract attention with racist ads. (17.01.2018)