′Coolest Monkey in the Jungle′: the long history of racism in advertising | Culture| Arts, music and lifestyle reporting from Germany | DW | 17.01.2018

A half-naked Asian woman is sprawled across a pizza box. A black man is whitewashed in the washing machine. H&M is not the only company to attract attention with racist ads. 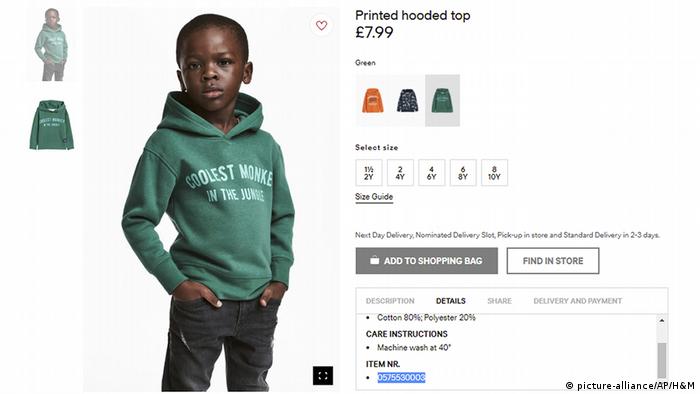 The campaign clearly backfired: When the Swedish fashion company H&M brought out an ad with a dark-skinned boy wearing a green hooded sweatshirt that said "Coolest Monkey in the Jungle," the outrage around the world was intense.

H&M stores in South Africa had to actually close their doors because upset citizens were storming in. Even the fact that the mother of the boy has spoken out to say she doesn't understand what all the fuss is about has not appeased people.

H&M has meanwhile retracted the ad and apologized, but a sense of distaste remains. And there's still the question whether the company lanced the campaign to grab attention, along the lines of "bad advertising is good advertising."

For quite a long time, advertising with racist undertones was common, as were particular names for products. For instance, Germans used to refer to a popular chocolate-coated marshmallow treat as the "Negerkuss" ("Negro's Kiss"). Nowadays, the politically correct name is "Chocolate Kiss" or "Foam Kiss."

It's all the more surprising, then, that one of the world's largest sweets producers — Italian company Ferrero — kicked off an advertising campaign in 2013 that boasted the slogan "Germany chooses white."

The marketing department had demanded a "rejuvenating cure" for promoting the classic praline since the old one showing young people inviting each other to a "little kiss" had become stale.

In addition, there had been an innovation in terms of taste: the brown chocolate praline was to be covered in white chocolate. So, when it came to promoting the new creation, the publicity strategists had their eye on the upcoming Bundestag elections.

They based their clip on Barack Obama's presidential election campaign slogan: an animated Ferrero box of chocolates spoke in front of a lively audience, saying "Yes weiß can" (Yes white can) rather than Obama's "Yes we can," was well as "Germany votes white."

What was supposed to be the "tastiest comeback of the year" ended up evoking a maelstrom, both in the newspapers as well as on social media. "One of the most racist ads I have seen this year," someone wrote on Facebook. Another wrote: "It's unbelievable that someone could produce such an ad without thinking for a second how problematic it could be." There was "zero intercultural competence and sensitivity" to be found in the campaign, said another commentator.

Ferrero issued a public apology and stressed that the clip was in no way intended to xenophobic. Still, the publicity specialists apparently didn't realize that playing around with black-white clichés was pretty tasteless.

'Dark = dirty' has a long history

The US cosmetics and hygiene company Dove likewise had to weather criticism for forging a racist advertising campaign in 2017.

A video showed a black woman pulling off her t-shirt revealing a white woman underneath. Critics said that the ad implied that the Dove gel would turn black people into white people. Dove immediately apologized, saying that the ad "missed the mark in representing women of color thoughtfully." 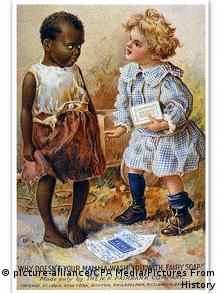 Discrimination, such as equating dark skin with being dirty, has a long history in Anglo-American advertising campaigns, the New York Times noted, pointing to a 100-year-old ad showing a white child saying to a black one: "Why doesn't your mamma wash you with Fairy Soap?"

The Nivea company likewise caused a whirlwind of criticism on the web with its Facebook ad for customers in the Middle East. The ad was for a deodorant that was not supposed to leave traces on clothing. It showed a woman wearing white clothing, with her back facing the viewer. Underneath were the words "White is Purity."

Racism in the spin cycle

The Chinese company Shanghai Leishang Cosmetics appears to have internalized that. In 2016, it launched an ad in which a young Chinese woman is flirting with a dark-skinned painter. Just when they are about to kiss, she pushes a "Qiaobi" tab into his mouth and then throws him into the washing machine. When the wash cycle is over, he comes out not only with clean clothes, but also with skin lighter than the Chinese woman herself.

The ad spread like wildfire on the web and prompted outrage around the world since "black" is equated with "dirty" in the ad.

Unfortunately, as the Huffington Post noted, that corresponds with common prejudices in China. The website "Shanghaiist.com" even noted that many Chinese people actual have a real phobia of dark skin. In Asian countries, white skin is considered the beauty ideal.

Only after massive international protest did "Qiaobi" stop the ad. However, the Chinese apparently copied but reversed the ad from an Italian one from 2007. In it, the Italian woman pushed the thin white man into the washing machine, and later, out comes a muscular black man. 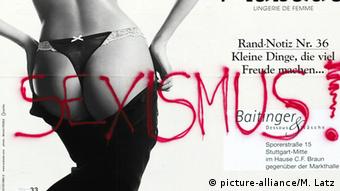 People can speak out about sexism or racism in advertising; they can also contact the Deutscher Werberat with complaints

The German Advertising Standards Council (Deutscher Werberat) has reviewed ads for discriminatory or sexist content since 1972. It doesn't just review ads from major companies, but also those of smaller ones.

The Berlin-based food delivery service "Call a Pizza" was admonished in 2014 for an ad for the "Asian Temptations" section of its menu showing a scantily-clad young Asian woman lying on a bed. "This presentation — the pose and particularly the slogan — are debasing and discriminatory since it leads one to believe that both the food and the woman can be ordered, or rather, purchased," the council said.

Whether an ad is racist or not varies from person to person. But it's clear that many clichés surrounding ethnicity are still lodged in people's minds and not easily dispensed with. Using the hashtag  #notoracism, web users can denounce racism, whether in advertising or elsewhere.