It was a top meme in 2017, but the infamous shot of a man checking out a passing woman has now landed a Swedish company in hot water with the country's advertising regulator. The firm had retooled it for a job post. 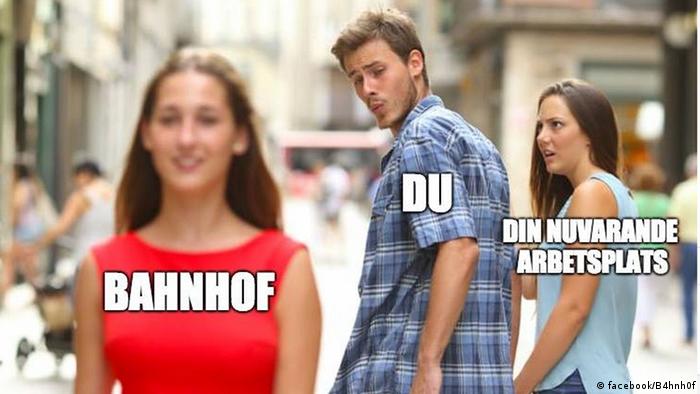 The Swedish internet service provider Bahnhof has been reprimanded by the nation's advertising ombudsman for a sexist advertisement using a viral stock photo showing a man checking out the backside of a passing woman.

The photo, known as the "distracted boyfriend meme," shows a man walking alongside a woman, presumably his girlfriend, but turning to look approvingly at a passing woman, who appears oblivious to his gaze, while the girlfriend regards her boyfriend in disgusted disbelief.

Bahnhof posted the photo to Facebook this past April to advertise job openings. It placed the words "you" over the man, "your current employer" over the outraged girlfriend, and "Bahnhof" over the oblivious woman.

The company's post triggered a slew of comments criticizing the company's use of the image as sexist.

Sexist marketing use of stock photo

"The depiction ... imparts a stereotypical image of men looking at women as being interchangeable like a workplace, which is degrading," the watchdog's statement said.

It added that, "the objectification is reinforced by the fact that women are designated as workplace representatives while the man, as the recipient of the advertisement, is being produced as an individual." Ad reviewers also noted that Bahnhof's use of the image could turn off female job applicants.

Nonetheless, the ad watchdog said that the ad stereotyped both men and women.

In its defense, Bahnhof told the ad watchdog that it had "no sexist or objectification intent" in creating the ad and that it had merely wanted to portray its job openings in a humorous way.

"Anyone familiar with internet and meme culture knows how this meme is used and interpreted. Gender is usually irrelevant in the context. We explained meme culture to the ombudsman, but it chose to interpret the post differently," the company said in a statement shared on its Facebook page.

"If we should be punished for anything, it's for using an old and tired meme," it added.

The photograph, taken by Spanish photographer Antonio Guillem, went viral in summer 2017, leading to a flurry of press articles and endless variations on the image ranging from economic ideologies to historical mashups. It went on to become one of the most widely shared memes of the year.

Twitter users also made fun of how the ombudsman's ruling was distracting readers from other news developments — also a common critique of last year's press to-do over the meme's original circulation:

The Swedish ombudsman's guidelines states that advertisements should not men or women as "sex objects" or in stereotypical gender roles "which can be considered to … convey a degrading image of women or men." Its judgements are recommendations, and it cannot impose penalties.

What a Düsseldorf hair salon claims is "just fun," the German Advertising Council has deemed "sexist." In the world of advertising, where do you draw the line? (21.10.2016)

German carmaker Audi has drawn stern rebuke in Chinese social media for a new commercial that compares women to second-hand cars. The issue has the potential to hurt Audi's sales in one of its most important markets. (19.07.2017)