Moldova: Collateral damage from joint maneuvers with US | Europe| News and current affairs from around the continent | DW | 08.05.2016

Moldova: Collateral damage from joint maneuvers with US

Joint maneuvers with US soldiers are causing alarm in the Republic of Moldova. The pro-Russia opposition has referred to the exercises as an invasion. 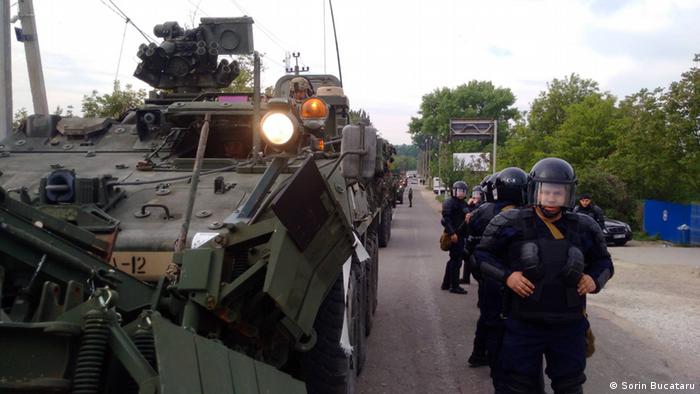 It's not the first time that the US army has taken part in military exercises with the formerly Soviet Republic of Moldova. This time, though, emotions ran high when about 200 US soldiers, dozens of armored vehicles and various examples of heavy equipment passed through villages and towns after crossing the border from Moldova. "I'm impressed, seeing these vehicles here," said Veaceslav, a man from Negresti, as he stood with a group of locals on the roadside, waving at the US soldiers. "I feel as if the liberators had finally come to us," he added.

Veaceslav and his fellow US supporters stand on one side of the public political divide. After Russia annexed Crimea and apparently supplied separatists in eastern Ukraine, Moldova's pro-EU government has tried to align the country with the United States and European Union. Joint military exercises with the United States represent another step in this direction. The pro-Russia opposition is doing everything it can to try and torpedo this course, and it currently enjoys more popular support. A presidential election is scheduled for this year, and the opposition candidate Igor Dodon currently tops all the opinion polls. The military maneuvers have created another opportunity for the Socialist leader to demonstrate his party's fighting spirit. The Socialists call the maneuvers an "American invasion" and claim that the presence of the US military contravenes Moldova's neutrality.

"What are the Americans doing here?" wondered Gennadiy, a worker from the town of Balti. "We're a neutral state. Why are they provoking Russia? Can't they see what's happening in Ukraine?"

Evdochia, a pensioner, agreed with that assessment. "Now NATO is here," she said, "bringing war." Not a single tank had crossed into her country back when the barbed wire was still up along the Romanian border. 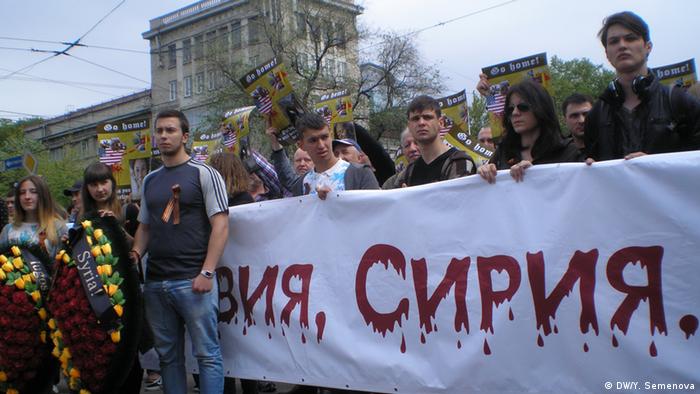 Last week, the Socialists organized a protest "against the invasion" by the United States. When the first US tanks arrived at the border crossing in Sculeni, they were greeted on one side by young people who carried banners with such slogans as "NATO and Europe are saving Moldova." But the US soldiers would have seen such signs earlier had the convoy not been held up by a group of Socialist parliamentarians who blocked the crossing for an hour. On their chests they wore the Ribbon of St. George: an old symbol of the Russian and later the Soviet Army. They demanded that the US soldiers show their papers. Party leader Dodon posted photos of the Socialist border control on Facebook and received widespread media attention.

In Chisinau, the pro-EU government is under pressure. Defense Minister Anatol Salaru said joint military exercises were a part of normal bilateral cooperation and in no way undermined Moldova's neutrality. There was only one country threatening neutrality, Salaru said: "This state has stationed its occupying troops in Transnistria" - a reference to the roughly 2,000 Russian soldiers stationed in a separatist, self-declared independent region, considered by most transnational bodies to belong to Moldova. Back in 1999, Russia announced that it would withdraw its soldiers from the region, but the troops are still there, and have been put on high alert because of the maneuvers.

On Monday, Moldova will mark both Victory Day, which celebrates the defeat of Nazi Germany in World War II, and the country's own liberation from the Soviet Union. A planned military exhibition will present the US army and its heavy equipment alongside Moldova's own forces.

This is why Dodon has called for supporters of the Socialists to protest in Chisinau against the presence of the United States in Moldova's capital on Victory Day - much to the annoyance of US Ambassador James Pettit. He quickly reminded Moldovans of the many sacrifices made by the Allies - including, of course, the United States - in the war against Hitler's Germany.

But historical truths often get lost in election campaigns. In any case, Gennadiy, the worker from Balti, thinks Dodon is right. The young man enthusiastically quoted a political scientist from Russian television who recently warned of an "occupation of Moldova by the US Army." The Americans have no business in Chisinau on the day of the Soviet victory over Nazi Germany, Gennadiy said, and he is not alone in this view. This symbolically significant May 9 in Chisinau could show how many people see things Gennadiy 's way - and how many support the government's pro-EU course.

NATO's top commander in Europe, Philip Breedlove, made the claim about the migration crisis during US Senate testimony. He also warned lawmakers that Russia posed a renewed existential threat to the US and its allies. (02.03.2016)