Mixed reaction in German parliament over eurozone debt deal | Germany | News and in-depth reporting from Berlin and beyond | DW | 27.10.2011

The eurozone's Greek debt deal has been largely welcomed by the German parliament. But the opposition Social Democrats have criticized the latest measures for being long overdue. 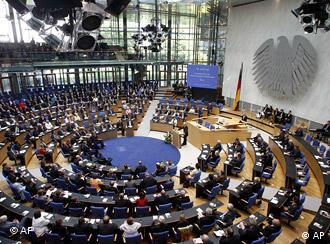 Despite approval of the deal, skeptics remain in parliament

With the exception of the Left party, which opposed the euro rescue package on principle, political parties in the German parliament, the Bundestag, welcomed the Greek debt relief agreement on Thursday.

They pointed out, however, that the key to solving the eurozone's problems lay in strengthening competitiveness and limiting public debt in Greece and other troubled EU countries.

The leadership qualities of Chancellor Angela Merkel, of the Christian Democrats (CDU), were praised by the governing coaliton. Merkel had for the most part been able to push her own agenda in Brussels.

Subdued approval also came from the minority who in recent weeks had publically opposed Merkel's stance on the crisis. "We are now getting closer to the reality of the situation," said Wolfgang Bosbach, a CDU party member who had warned of increased risks on debt guarantees for Germany. He voted against the expansion of the European rescue fund in parliament.

According to Bosbach, the debt haircut was necessary, but not sufficient. The decisive point will be whether Greece can strengthen its economy and collect enough tax revenue to return to the financial markets on its own steam. However, at the moment, said Bosbach, "it doesn't look likely." 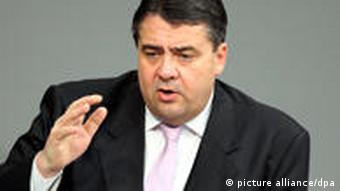 Gabriel has called for a Marshall Plan for southern Europe

In response, Sigmar Gabriel, leader of the opposition Social Democrats (SDP), called for a growth program for southern Europe, similar to the post-World War II Marshall Plan. Money for this program would come in part from a financial transaction tax, such as the one Germany wants to enforce internationally.

The decisions made in Brussels on Wednesday night were long overdue, Gabriel told German public radio Deutschlandfunk. "I am pleased that Merkel and other conservative leaders made a 180- degree turn last night," he said.

"It's just a shame that all the procrastination and delays made the operation very expensive and increased the risks."

Gabriel said it would have been better to cut the Greek debt before Italy and France became a target of the speculators. Despite the criticism, the SPD nevertheless supported the EU bailout bill in the parliament vote. The SDP leader said it was in the interest of German workers that "Europe doesn't go bankrupt," because as an important export market the continent secures German jobs.

Support for the debt deal also came from the opposition Green party, although their finance spokesman Gerhard Schick said they were expecting "months of uncertainty," as the time period eurozone leaders gave banks to raise their capital buffers was too long. 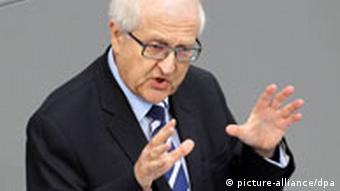 Brüderle said Greece will need to change, "step by step"

Earlier Thursday, Rainer Brüderle, the parliamentary leader of the pro-business Free Democrats, noted that the Greek debt haircut had already had a positive effect on the financial markets, pointing to the initial market rises in Asia in early trading.

Brüderle compared the debt cut with the famous Brady bonds, which former US Treasury Secretary Nicholas Brady introduced in several Latin American countries, including Uruguay, in the late 1980s to avert state bankruptcies. The principle is the same: the banks agree to write off half of their debt and they get loans of a higher value for the other half.

Brüderle, who until recently was Merkel's economy minister, says the core problem is the fiancial disorder. "The Greek plight is that the country is not competitive and its not in a position to develop this side of its economy. This has to be changed, step by step."

European press review: The debt crisis is far from over

European editorial writers have largely welcomed the outcome of Wednesday's crucial EU summit. But many have warned that a Greek debt haircut may not be enough to solve Europe's spiraling financial crisis. (27.10.2011)

One month after a rebellion within her own party's ranks over the eurozone bailout fund, Chancellor Angela Merkel has convinced a broad political coalition to give her more power in negotiating the fund's expansion. (26.10.2011)

European leaders hammer out deal to help save the euro