Scores of migrants on a coast guard boat docked in Sicily were blocked from leaving by the interior minister. A top Italian medical official resigned overnight in protest over Matteo Salvini’s hard-line stance. 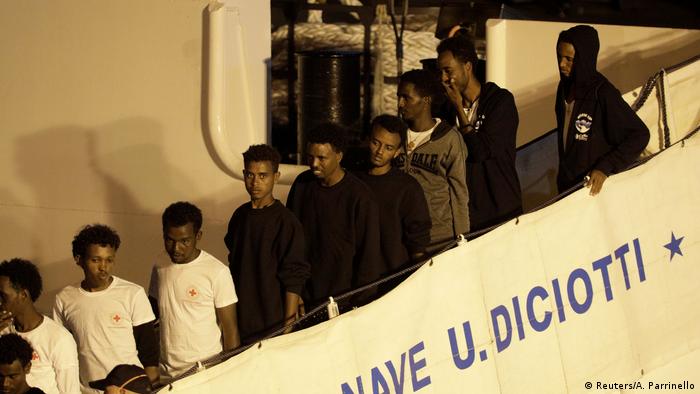 Some 140 migrants trapped on an Italian coast guard boat for nearly a week were allowed to disembark Sunday after Ireland and Albania agreed to take in some of them.

The boat docked Monday at Catania in Sicily with about 180 migrants on board.Italy allowed 27 unaccompanied minors to disembark during the week, and on Saturday 12 women and men were also allowed to leave the boat for medical reasons.

But Italy's far-right Interior Minister Matteo Salvini had refused to let the rest disembark unless other EU countries agreed to take some of them in. In the process, Rome also threatened to withhold EU funding.

"As a doctor, I cannot tolerate to lead a public health body at a time when people are treated in this way on our territory," Vella said in an statement put out by the Italian news agency, ANSA.

But a deal was finally brokered by the Catholic Church. The church will take in most of the migrants but Albania, which is not an EU country, will take in 20, as will Ireland.

EU Migration Commissioner Dimitris Avramopoulos welcomed the deal, calling it the result of "solidarity across borders and communities."

"But we cannot always wait for this type of goodwill solidarity," he said in a statement. "We need to have structural measures."

Avramopoulos also warned that Italy would only hurt itself if it persisted in attacking the EU's migration policies.

"I think that politicians in your country need to understand that you are not alone, that Europe is trying to help you. On the contrary, anyone who attacks the EU is shooting himself in the foot," he told Sunday's edition of La Repubblica newspaper.

The migrants disembarked several hours after Sicilian prosecutors announced they were opening an investigation into Interior Minister Salvini for "illegal confinement, illegal arrest and abuse of power" for his refusal to allow the migrants to disembark, local media reported.

Avramopoulos also stressed the need for a clear policy on how to handle future incidents involving migrants rescued at sea.

"We cannot move ahead with ad hoc solutions for each boat," he said. "The migration phenomenon is not going to stop overnight so we need to manage it together as one European family."