Mick Schumacher will fulfill his dream of competing in Formula One next season after signing on with Haas. The 21-year-old son of F1 legend Michael Schumacher has now claimed the F2 world title before his promotion.

Formula One is set to welcome a new Schumacher, after Mick followed in his father's Michael's footsteps to sign a "multi-year contract" with Haas starting in 2021.

The 21-year-old recently sealed the Formula 2 series title and has long been tipped to graduate to the top tier.

"The prospect of being on the Formula 1 grid next year makes me incredibly happy," Schumacher said.

The German said he was "speechless" and thanked both Ferrari, where he was part of the racing giant's academy, and Haas for their trust.

"I also want to acknowledge and extend my love to my parents. I know that I owe them everything. I have always believed that I would realize my dream of Formula 1.

"A huge thank you must also go to all the great motorsport fans out there who have supported me throughout my career. I will give it my all, as I always do, and I look forward to going on this journey together with Haas F1 and them."

Mick Schumacher's debut season will come exactly 30 years after his father Michael's entry into Formula One at the Belgian Grand Prix in 1991.

Michael is a legend of motorsport, having won seven world championships and 91 races, records that were recently equaled and usurped by British racer Lewis Hamilton.

The younger Schumacher's entry into F1 will be celebrated widely among the Schumacher family and its fans, even after the desolate years following Michael's skiing accident.

From 'Betsch' to 'Mick Junior'

Despite a blonder hue of hair inherited from his mother Corinna, the family resemblance is striking, especially when cracking a broad Schumacher smile in his race overalls.

Born in 1999 and raised in Switzerland, Mick raced karts as a young boy under Corinna's maiden name, Betsch, to escape the spotlight.

"I think that that was something very positive for me. Not having too much media attention, not having too many people looking at me, I was really able to just fully focus on what I was doing, and I think that really helped myself to become what I am now," Schumacher said in the F2 race series' podcast The Road to F1 late last year.

But the 21-year-old also recalled how the cloak of anonymity could not last among fellow petrolheads. Frequently, his cover would be blown, and he'd ask people who had figured out who he was to please keep it to themselves and put their cameras away.

By his mid-teens, in the 2014 international karting championships, even more cottoned on to his new "Mick Junior" alias. Once he stepped into single-seater cars in 2015, the racing career of "Mick Schumacher" officially began. Since then, he's faced massive scrutiny for a driver still rising through the junior ranks.

Perhaps not in the genes, but in the family

Motor racing has a long tradition of drivers' children one day donning a helmet of their own.

Two of Michael Schumacher's earliest title rivals, Damon Hill and Jacques Villeneuve, were the offspring of F1 legends Graham Hill and Gilles Villeneuve. Red Bull's Max Verstappen has long surpassed the achievements of his father Jos, one of Michael's early teammates at Benetton. And Michael's last teammate Nico Rosberg would go on to emulate his father Keke and win the championship.

But the explanation for this phenomenon goes further than the existence of some manner of speed gene; it's about access and exposure. For a child to pursue a career in motorsport, their parents must invest considerably more money and time than for most sports. The entry barriers are unusually high.

Interest in racing, financial resources, sponsorship leads and personal contacts in motorsports are all immensely helpful if trying to help a child on such a path, and "racing dads" tend to be well placed to provide the lot.

In Michael's case, his parents were of modest means but still recognized this route in. They took on extra work at a local kart track to support his efforts. The youngster's speed soon prompted circuit owner and talent-spotter Gerhard Noack to offer to foot some of the bills as his development gathered pace.

"I'll provide the kart, you give me your son," was Noack's famous proposal to Rolf Schumacher, as he recalled speaking to German broadsheet Die Welt in 2018. A similar deal would follow for Ralf, and the Schumacher brothers would spend much of their childhoods pounding round the Erfltandring, embarrassing older members of the Kart-Club Kerpen. 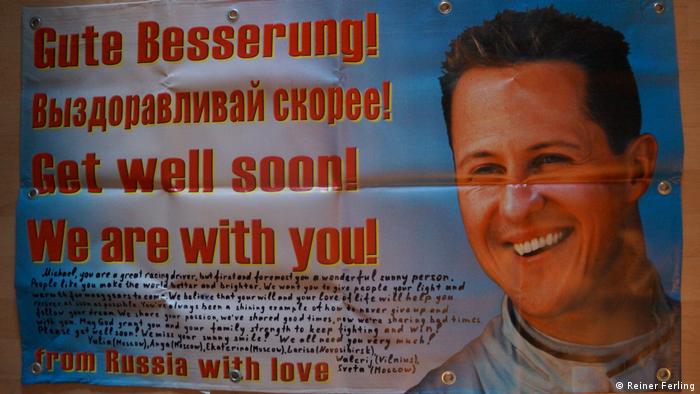 Michael Schumacher has been seriously ill since a skiing accident in 2013, but his son Mick is following in his footsteps.

Schumacher senior could also provide some input on the driving side early in Mick's career, before sustaining his severe injuries while skiing in December 2013.

"He did give me tips and tricks here and there," Schumacher recalled last year. "Obviously also he did leave me, freely, to make my own mistakes, because I think through mistakes you do learn the most, and that is something he knew."

During the 30-minute podcast, Schumacher revealed an immense passion for motorsport, near-fluent English, a polished but friendly demeanor, and a total dedication to his physical fitness and career — not unlike his father before him. When the interviewer Alex Jacques asked how Mick "unplugged from racing" and what a "normal non-race weekend" might look like, he got a rather more businesslike answer than he'd bargained for:

"Most likely: wake up, train, have breakfast and then, yeah … I don't know. Go biking or even spend some time on the water, so something I really like doing, and mostly in the afternoon go train again," Schumacher said.

Unwinding by working out before breakfast: a chip off the old block if ever there was one. Whatever happens when he does graduate to the F1 career he was groomed for, a sense of entitlement or a lack of hard work won't ever hold him back.

A Mercedes driver did win the Russian Grand Prix but it wasn't the one everyone expected. Valtteri Bottas took the checkered flag after Lewis Hamilton suffered a 10-second time penalty.