Lewis Hamilton wrote his name into the Formula One record books with a victory in the Turkish Grand Prix. The Briton secures his seventh world championship title, equalling Michael Schumacher’s record. Michael Schumacher no longer stands alone as the most decorated driver in F1 history. Lewis Hamilton has joined the German as a seven-time world champion and he did it with a controlled drive that Schumacher would have been proud of.

In the rain, Hamilton struggled in qualifying and started sixth on the grid. Pole-sitter Lance Stroll led the race for a long time and Hamilton found himself a pit stop and several places behind the leader, but the Mercedes driver found his pace when the track dried off and stayed on the intermediate tyre until the end. He even overruled his teammate's instructions to pit late on, but was vindicated when he crossed the line in first.

"That's for all the kids out there who dream the impossible, you can do it," said Hamilton, whose victory was the 94th of his career — also an F1 record.

Six of Hamilton's seven titles have been won with Mercedes, with the other — his first — coming with McLaren in 2008.

It was also a day to remember for German driver Sebastian Vettel, who secured his first podium since Mexico 2019 with a storming last lap which saw him pip Charles Leclerc on the final corner.

Drive of the day — Sebastian Vettel (third) — Climbed nine places from 12th on the grid to secure his first podium finish in over a year.

Lap 54/58 — Heavy rain is now forecast for the last lap of the rain. Will Hamilton be singing in the rain or drowning his sorrows?

Lap 53/58 — Hamilton is five laps away from glory. His major concern between now and the end of the race is whether he can finish on his intermediates and he asks the Mercedes mechanics: "Is there any chance of this tyre exploding?" — the answer: "We don't think so Lewis."

Lap 48/58 — Leclerc breezes past Verstappen to move into a podium place, which results in Verstappen pitting for new intermediates. Hasn't been a great day for the Dutchman.

Lap 42/58 — Grey clouds are gathering overhead and rain is forecast around lap 48, which could make the final few laps interesting. Meanwhile, the miserable weather reflects Bottas' afternoon. The Finn has spun yet again and remains down in 13th.

Lap 37/58 — Hamilton leads! Out of nowhere, the champion-in-waiting moves to the front of the pack with the help of DRS, overtaking Perez on turn 12.

Lap 32/58 — Albon loses grip out of turn four and spins out. He clambers back onto the track and that opens the door for Hamilton to sneak into a podium poition. Vettel pits but it's a sluggish one and the German is fifth.

Lap 28/58 — Stroll tells his team radio that he has understeer, which is allowing Perez to eat into his lead. Meanwhile, Vettel is pulling away from Hamilton, who remains fifth.

Lap 23/58 — To add insult to injury, Verstappen is facing a penalty for his exit from the pit lane a few laps ago. He was clearly feeling some frustration after his spin a few moments before and exited the pits in a reckless manner. Not the greatest few minutes for the young Dutchman.

Lap 18/58 — Drama! Verstappen spins out after trying to overtake Perez through a gap that didn't exist. He loses control and loses a few places and has to pit onto the intermediates as a result.

Lap 15/58 — Hamilton tries to overtake Vettel to go fourth but locks his brakes and ends up conceding a place to Albon, who feeds off the scraps. Hamilton, usually imperious in the wet, is not quite his self today.

Lap 10/58 — Hamilton is flying now though. He's made up two places and is back up to sixth on the intermediates. Perez and Verstappen both makes lengthy pit stops, but crucially Verstappen returns to the track ahead of Hamilton.

Lap 5/58 — Up front, Stroll still has the lead but Perez is closing in on him with a fastest lap of 1 min 53.215. Meanwhile, Hamilton has conceded places to Verstappen and Vettel. It's all happening in the rain out there!

Lap 1/58 — GO GO GO! It's a nightmare start for Bottas, who spins out and seems to have taken his title hopes for this season with him. He gets back on the track well back and could yet fight his way back, but that's a major advantage for Hamilton.

After five races with no points, Lance Stroll sealed a stunning pole on a wet track in Istanbul. The Racing Point driver stole top spot away from Max Verstappen, who struggled for grip after a late change to inters.

This is the first pole of the Canadian's career and with teammate Sergio Perez finishing in a career best starting spot of third, this was a day to remember for Racing Point.

Lewis Hamilton, known for his wet-weather driving, struggled and had to contend with sixth on the starting grid. Mercedes teammate Valtteri Bottas will start in 9th.

In round 14 of this 17-race season, Hamilton remains on course to claim his seventh drivers' championship. After this qualifying run though, this is a weekend that could shake up the rest of the standings.

"I didn't expect this... I had the confidence from the car and I just nailed pretty much every corner. It's such a great way to bounce back after a few rough weeks." — Lance Stroll 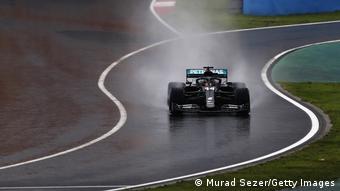 Situated an hour east of the city, this track was built with few expenses spared when it first hosted a GP back in 2005. It's design has drawn similarities to Spa and Interlagos, with the fast and bumpy turn 8 one of the most demanding tests for drivers' focus. It was last on the F1 calendar back in 2011, when Sebastian Vettel, racing for Red Bull, crossed the line first after 58 laps.

In wet conditions in Istanbul, the defending Formula One champion struggled in qualifying as an unexpected driver took advantage. The Turkish Grand Prix returns to the F1 schedule for the first time since 2011.