Formula One icon Michael Schumacher celebrates his 50th birthday on Thursday. While a skiing accident five years ago has seen Schumacher retreat from the public eye, his impressive career is fondly remembered. 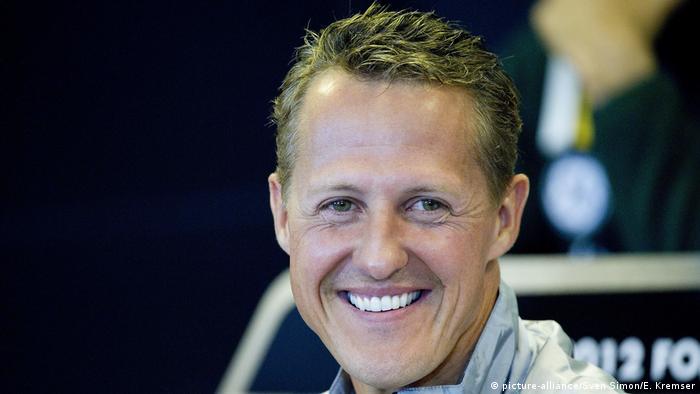 From the moment Michael Schumacher won his first Grand Prix race in 1992, the sporting world got the sense that a racing great was about to emerge. But few could have predicted just how monumental and game-changing his career would prove to be.

At the age of just 23, Schumacher's first season in Formula One was the beginning of an incredible and record-shattering career. Across his 18 seasons competing at the highest level, Schumacher claimed an unrivaled seven world championships and 91 race victories.

The German was a true trailblazer in Formula One, bringing unprecedented levels of committment, competitiveness and physical conditioning to the track. While he has retreated away from the public eye after a tragic skiing accident in 2013, his legacy lives on.

"He will always be the greatest of all time."

Schumacher's standing in F1 is untouchable, with the German boasting millions of fans and admirers among drivers past and present.

He won his first two championships with Benneton in the 1990s, tussling regularly with Damon Hill, with whom he had a fiery relationship both on and off the track.

Victory over Hill in 1994, which was sealed after Schumacher collided with his opponent's Williams and forced both drivers to retire in the final race, was a source of controversy. Some felt Schumacher deliberately caused the crash.

Even so, Hill speaks glowingly of his arch rival, who became the first German to be crowned Formula One champion.

"He set a standard of domination, though sometimes controversial," Hill said. "Winning seven titles is crazy." 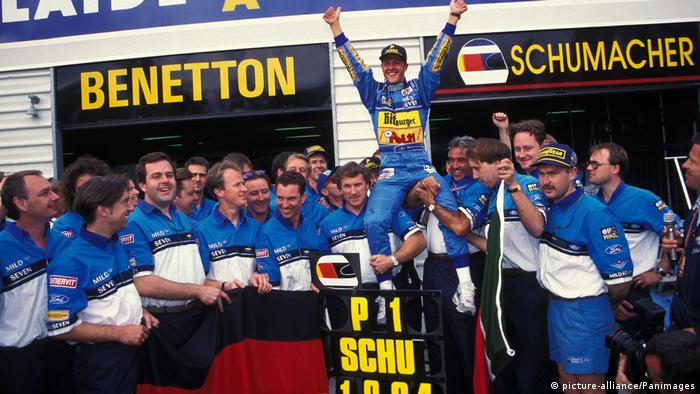 Schumacher is held aloft by his Benetton team in 1994

Schumacher went on to win a record five consecutive titles with Ferrari between 2000 and 2004 before his first retirement in 2006. But his fierce competitive nature saw him return to the fold, this time with Mercedes in 2010. At the age of 41 he lined up alongside compatriot Nico Rosberg.

"One trait that I found really fascinating was the energy he put into his profession. It was amazing, limitless and incredible," Nico Rosberg told press agency DPA.

It's said that Schumacher's influence was pivotal in the growth of Mercedes, which has won the past five world titles, with Rosberg claiming one and Lewis Hamilton grabbing four of his five championships with the German team.

"Fast racing is the way to become the best, but to shape a team and build it up in the face of setbacks, that makes the difference between very good drivers and very, very good drivers," former Mercedes vice president Norbert Haug said.

For current world champion Hamilton, who trails Schumacher's incredible records by 18 race wins and two championships, there will only ever be one true great in Formula One.

"He will always be the greatest of all time. Personally, I remember that I always picked Schumacher as my driver on video consoles when I was young," Lewis Hamilton told Auto Bild. 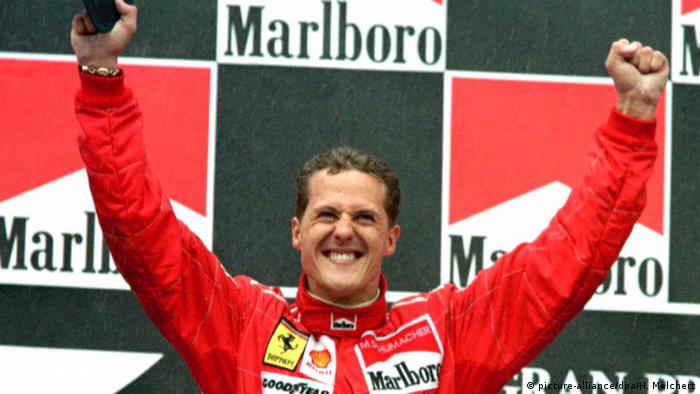 Since that fateful skiing accident on December 29, 2013, which saw Schumacher sustain brain damage and a six-month-long induced coma, however, little has been made public about Schumacher's condition.

His family has chosen to acknowledge the world champion's notorious preference for privacy as he receives round-the-clock medical care at his family home near Lake Geneva in Switzerland.

Former colleagues and friends at Ferrari are still in regular contact but have also ensured his family's wishes are respected.

"I'm always careful when I say something, but it's true that I watched the Brazil Grand Prix in Switzerland with Michael," his manager at Ferrari Jean Todt recently revealed. 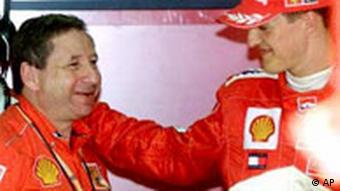 "In the end, only positive thoughts help him. I and his whole family are positive in the mental sense despite the circumstances."

Former Ferrari technical director Ross Brawn also understands why Schumacher's wife Corinna and his family has kept close wraps on any news released about his condition.

"Michael has always been a very private person and that's been a guiding principle in his career, his life and his family always agreed with that choice."

"He treated his driving career as though it was a mission to which he dedicated himself completely from the first to the last day."

On the eve of Schumacher's milestone 50th birthday, however, his family did release a very rare statement about the Formula One icon.

"We are very happy to celebrate Michael's 50th birthday together with you and thank you from the bottom of our hearts that we can do this together." the statement read.

"We want to remember and celebrate his victories, his records and his jubilation. You can be sure that he is in the very best of hands and that we are doing everything humanly possible to help him."

The Keep Fighting Foundation, set up by Schumacher's family, will release the Official Michael Schumacher App to mark his birthday, "so that we can review all together Michael's successes".

And Ferrari has opened up a special exhibition, The Michael 50, in its museum in Maranello, Italy.

Even without regular updates about his health, Schumacher's millions of fans will still be able to help celebrate their icon's birthday by remembering a truly great and unrivalled career in Formula One.