Merkel′s win comes with EU prestige intact, but power weakened | Europe | News and current affairs from around the continent | DW | 25.09.2017

The "Queen of Europe" is keeping her crown, much to Brussels' relief. But after securing a fourth term as German chancellor, the coalition-building that Angela Merkel faces next will test her famous cool. 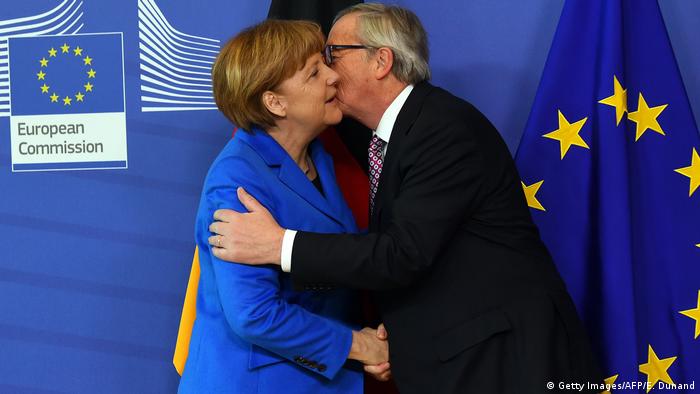 European Commission President Jean-Claude Juncker called it a "remarkable" election showing from Chancellor Angela Merkel. "I am impressed by the fact," Juncker told German journalists in Brussels, "that after 12 years of chancellorship ... and 12 years is a long time in politics, she managed to make her [Christian Democratic] party come first by a large margin."

Juncker did say it was worrying when there was a shift in the balance of power, referring to the weak result of Merkel's junior coalition partners the past four years, the Social Democrats (SPD). However, he presumed the SPD would stay true to their "pro-European" positions.

The EC chief was not so cheerful when it came to the success of the far-right populist Alternative for Germany (AfD). He said he assumes that everyone in Europe, and particularly in Germany, understands that it's now time to draw a clear line between themselves and the extreme right, which he characterized as "fundamentally wrong" and "jeopardiz[ing] Europe." He reiterated an adage that those who "imitate populists, will become one," urging pro-European German parties interested in forming a stable coalition to avoid that fate.

Christian Odendahl of the Centre for European Reform (CER) said Merkel's position will not be significantly weakened in the eyes of other EU leaders, but the less "wiggle room" she now has domestically will affect her ability to make deals with the bloc. Instead of having a commanding majority in the parliament, Odendahl pointed out, "she'll have to look carefully at all sides to make sure everyone's happy in her coalition – which will be a difficult coalition to begin with."

He believes this will manifest itself in an early and obvious way in the German relationship with France. Odendahl said he expects French President Emmanuel Macron to push Merkel hard to agree on eurozone reform, something which Germany does not get excited about under any circumstances. "It will be one of the issues that Macron will insist on," Odendahl said. "Merkel knows that, in order to reinvigorate the German-French tandem in Europe, she needs to give Macron something. The problem is of course that she is now more restricted than she was before in terms of what she can offer."

Overshadowed somewhat by the AfD, Germany's Greens also fared well in Sunday's vote. European Greens co-chair, European Parliamentarian Reinhard Bütikofer, proclaimed proudly that the party's result in Germany was better than any poll had indicated. Bütikofer suggested the Greens stole votes away from the SPD and were a popular "antidote" to the AfD. "I believe we have been able to grow stronger because of our clear position on the big issues of environment, climate, justice and Europe," he said.

But some environmentally-minded Germans are not so confident of that. At a demonstration in downtown Brussels urging the European Commission to do more to implement the UN's Sustainable Development Goals, Ingo Ritz, an activist with the Global Call to Action Against Poverty, was unsure about the effect of the elections.

While Ritz worried that the AfD success foretells a "big danger that Germany also turns more nationalistic, more xenophobic," he told DW that he believes Merkel herself is committed to international development and climate action. However, he fears the Greens' presence in a potential coalition will be outweighed by the pro-business Free Democratic Party (FDP), which Ritz says will not pay enough attention to "social realities" in the poorer parts of Europe. 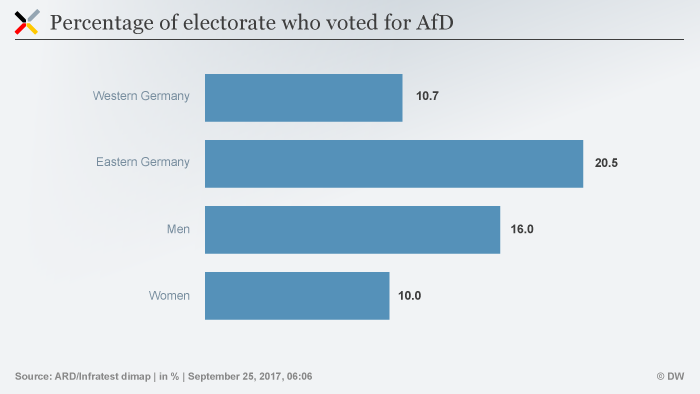 Moscow and bots strike out

One big loser who wasn't even on the ballot in Germany, according to some analysts, was Russian President Vladimir Putin. Jakub Janda, deputy director of the Prague-based European Values Think-Tank, said Putin "lost a major battle in Germany" with the defeat of what he feels was a "Russia-submissive" Social Democratic party.  "Now Russian-friendly parties will be probably running the German opposition seats – AfD, SPD, [the Left party]," he told DW.

"But it seems that if the 'Jamaica coalition' will be in place, the position on Russia will harden," Janda added, referring to the likely coalition of Merkel's conservative CDU/CSU, the Greens and the FDP.

Another way Russia fell flat, says Ben Nimmo, an information defense fellow at the Atlanic Council, was in the lack of significant impact from Russian and other far-right disinformation networks that spun so effectively in the US presidential election and UK Brexit vote.

"Just before the [German] vote, we identified a Russian botnet which was pushing pro-AfD messages," Nimmo told DW, referring to his team of colleagues with the Digital Forensic Research Lab (DFRlab). "This looked like a commercial botnet which had been switched over to German politics. It was used to amplify AfD hashtags and the accusation of election fraud. Earlier in the campaign, we identified a number of far-right attacks on Chancellor Merkel from the US and the UK, but they didn't gain traction in Germany."

Citing Brexit, CER's Odendahl cautioned against brushing aside the AfD's newfound but, nonetheless, still seemingly limited support. "British politicians are warning, 'don't be complacent about this, they will shape your debate and they will shape your agenda," he said. "The test for Germany comes now."