Chancellor Angela Merkel says exploratory talks in Berlin between her conservatives and rival Social Democrats are to go on to formal coalition negotiations. The SPD's Martin Schulz says he'll ask his party to proceed.

Merkel told a Berlin news conference that the participants in exploratory talks — underway since Sunday — had overcome their reservations.

Schulz said all 13 Social Democrat (SPD) negotiators had endorsed the preliminary deal. "Excellent results" had been achieved, he said. 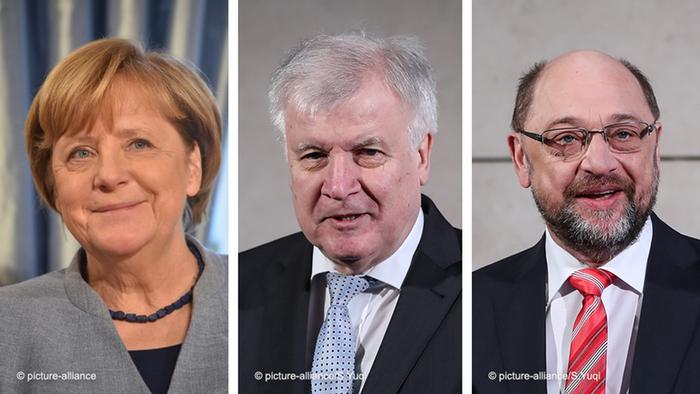 Merkel, Seehofer and Schulz: Will their parties adopt a coalition bid?

A "breakthrough" had also earlier been reported by Germany's parliamentary television channel Phoenix, adding that amendments to the text had been sought, especially among the SPD.

Some details have emerged from the draft copy, with DPA reporting that the sides had agreed to keep the top tax rate at 42 percent rather than raising it to 45 percent as wanted by the Social Democrats.

An agreement was also reportedly reached to limit the number of migrant family members who will be allowed to join asylum seekers in Germany, as well as the overall number of migrants allowed in the country each year.

Germany, which voted on September 24, has been in limbo at federal government level since November's collapse of exploratory talks, cancelled by the liberal Free Democrats (FDP), which had been negotiating with Merkel and the Greens.

A caretaker federal government led by Merkel is still in place.

The recommendation by Schulz to form a "grand coalition" will be put before an SPD party conference in Bonn on 21 January for a final decision. After the September elections, Schulz initially rejected the idea of a renewed coalition partnership with Merkel's conservatives.

The last phase of exploratory talks, spanning 24 hours from Thursday into Friday, reportedly centered on how to fund various tax, social welfare and health initiatives.

They were priced at more than double the €45 billion euros ($54 billion) available to be spread over a four-year government term, according to DPA.

The 39 negotiators - 13 from each party - had begun the exploratory talks last Sunday.

Their aim had been to hash out policy alignments before deciding to commit to formal coalition talks between Merkel's Christian Democrats, Seehofer's conservative Bavarian Christian Social Union and Schulz' center-left Social Democrats.

Angela Merkel's conservatives and the center-left Social Democrats have agreed to start talks on forming a government on January 7. The exploratory talks should end by January 12, they said in a joint statement. (20.12.2017)