The ex-European Parliament president has vowed to tackle gender pay gaps, calling them one of the greatest injustices. He further discussed defense spending, executive pay and tax cuts in a German newspaper interview. 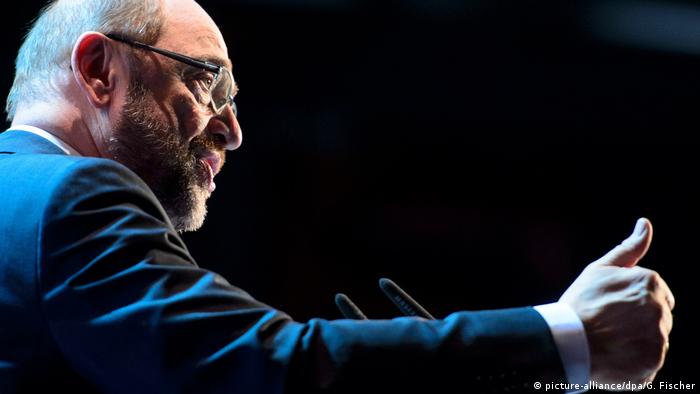 The 'Schulz effect': Change of fortune for the SPD

Selfies, flowers, autographs - on the campaign trail, Martin Schulz rushes from one enthusiastic SPD base to the next. It's a change of fortunes that was considered impossible in this election year: the 'Schulz effect.'

Social Democrats leader Katarina Barley told DW that the party's 100 percent vote in favor of Schulz's chancellor candidacy was "overwhelming." She also commented on the actions needed to fight against populism. (20.03.2017)

Martin Schulz, SPD leader and the German center-left's designated savior, has dismissed accusations that he improperly favored party friends with lucrative jobs. A conservative-led EU committee has rebuked him. (23.03.2017)

Social Democratic Party (SPD) leader Martin Schulz has discussed some of his policy goals in an interview published by the German weekly "Bild am Sonntag," offering insight into how he plans to challenge Angela Merkel for Germany's top political job.

"I would tackle two things directly: the clear commitment to strengthening the European Union and the abolition of one of the greatest injustices: that women for the same work earn less than men," Schutz said.

Germany has one of the highest pay gaps in the EU, with a wage discrepancy of over 20 percent between men and women. The politician with the center-left SPD added that his policy will be geared towards the work and life of ordinary citizens.

Schulz, who served as European Parliament president from 2012 and stepped down earlier this year, also vowed to curb executive pay. He has made social justice issues a key part of his pitch for leading the country.

"I promise that, as chancellor, I will implement a law limiting managers' pay in my agenda for the first 100 days in office," he told "Bild am Sonntag."

Schulz said he does not intend to offer tax cuts after German recorded a record-breaking budget surplus amounting to more than 20 billion euros ($21.62 billion). Instead, he says he would use the excess cash for education and infrastructure projects.

'We owe it to our soldiers'

Schulz said he wanted to increase defense spending, saying Germany's armed forces, known as the Bundeswehr, needed more money and should receive it.

"We owe it to our soldiers that they are optimally equipped," Schulz said in the interview. However, he stopped short of calling for a comprehensive overhaul of the armed forces, in contrast to Chancellor Angela Merkel, who has vowed to go forward with a significant increase in defense spending.

Defense spending has become a major subject of debate ahead of the parliamentary elections slated for September, after US President Donald Trump's administration warned NATO member states of possible fallout if they failed to meet a 2 percent of GDP target.

However, Foreign Minister Sigmar Gabriel, a member of Schulz' party, has questioned how the target should be assessed, arguing it should include aid and development programs.

Schulz said Germany and other European nations needed to work together to stem crises instead of solely pouring money into defense.

Meanwhile, the ex-European Parliament president said Gabriel, who stepped out of the race for the German chancellery, would "certainly be part of the federal government." He said Gabriel has done a "super job" as foreign minister.

Polls have shown a narrowing gap between Schulz's SPD and Merkel's Christian Democratic Union (CDU) in the run-up to the Bundestag elections.