The 'Schulz effect' - A change of fortune for the SPD

Selfies, flowers, autographs - on the campaign trail, Martin Schulz rushes from one enthusiastic SPD base to the next. It's a change of fortunes that was considered impossible in this election year: the 'Schulz effect.' 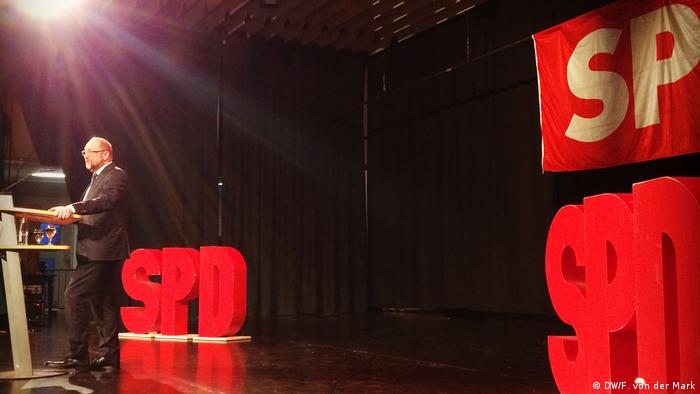 Martin Schulz has hardly arrived at this latest stop on his press junket tour before a white-haired man falls on the recently departed president of the European Parliament: "I've been a member of this party for 70 years, Martin. I believe in you!" Schulz looks at the man, clenches his fist and says: "Yes. We are winning."

With just those few words, Schulz sums up the recent rise of the Social Democrats (SPD). A victory against the overwhelmingly powerful Angela Merkel?  Three months ago this sounded ridiculous, but everything seems possible now that it has become clear that Martin Schulz is leading the SPD into the Bundestag election campaign. Poll numbers have risen by more than 10 percent, and it has been 20 years since the SPD gained so many new members. In Germany, there is talk of the "Schulz effect."

At a special party conference on Sunday in Berlin, Schulz is set to be elected head of the SPD and officially named the party's candidate to run against Chancellor Angela Merkel in elections set for September.

At this local community event in Saarland, Germany's smallest state, supporters stand in front of their benches, clapping rhythmically as Schulz takes the stage. Tables are decorated with balloons reading "I want fresh wind. SPD." Schulz stands at the lectern. A red SPD flag hangs on each side of him and red light bulbs illuminate the podium.

Schulz begins telling one tale after another about regular people. There's the worker who is canned for a minor mistake while the failed manager rakes in millions in rewards. The local baker who is left with nothing while a global coffee chain stocks its profits in a tax haven. The nurse, the bus driver, the single mother. With these, he works up to his rallying cry at the end: "Those who work hard for their money must not end up worse off than those who only have their money working for them." And trade unions, too, can rely on him, he adds. Since January 24, when Schulz took over top billing from presumptive SPD chancellor candidate and party boss Sigmar Gabriel, social justice has been his mantra. Here in the historical coal-mining region of Saarland, now rife with industrial production, his social justice stance plays particularly well. He finds great support here for the amendments he has announced to Agenda 2010, the series of welfare and labor reforms embarked upon by the then-coalition government of the SPD and Greens.

Since the early 2000s, the SPD has been sinking. Parallel to this, its farther-left competition "Die Linke" (The Left) has been gaining ground. Here in Saarland, the Left has increased support by 15-20 percent and nationwide by a full 10 percent. Schulz wants to woo these voters back by appealing to the SPD's core donors: reaching out to workers and labor unions and being a champion for the little guy. Across these events, attendees cheer "Martin, Martin!" Schulz seems to hit a nerve.

Here in Saarland, Anke Rehlinger, the top regional SPD candidate, has been a fixture at his side. But photographers and camera people are only interested in Schulz. He has just bowed to her, laughing: "And this on International Women's Day!" But once on stage, he makes a serious comment on the subject. "The equality of men and women is non-negotiable with me. Not even under the cover of freedom of religion." His criticism is aimed primarily at Islam, but also applies to the Alternative for Germany (AfD). Schulz wants to keep the right-wing populists as small as possible. In Saarland, he also makes clear he does not intend to let anyone's discomfort about a lack of integration lead them to the AfD. "Let's fight together to make sure the AfD scores its worst result here," he adds to rousing cheers.

Schulz knows that some people accuse him of populism. He himself says, "I listen to problems and speak to them." The best opportunity here is in this small Saarland community: with his own relatives. Schulz disappears into a bright green house. At the entrance, a sign reads "The Schulzes." His father, the 11th child of a miner, was born here. Today some of his cousins live here. When Schulz re-emerges from the family home, he speaks of a moving moment and a "return to the roots." Then suddenly he is next door: the neighbor has just looked out and invited Schulz in. As he stands in her living room, the woman gushes: "I never imagined it! I have no words. Here he is with us! I think it's great." Schulz's grassroots overtures are credible - he's able to be and enjoys being near people.

Scene change: Schulz is now in the small town of Kamen, in Germany's western state of North Rhine-Westphalia (NRW). It's no coincidence that Schulz spends a lot of time in these two states: both NRW and Saarland will hold state elections this spring. While in tiny Saarland it was mostly over-60s interested in the SPD frontman, here in NRW he is celebrated like a pop star. Next to the stage, 20-something young women swarm around him, wanting a selfie.

Young woman: "The Recklinghausen Young Socialists have fought for you! Please!"

Schulz: "But you'll still fight for me even if you don't get a selfie, right?"

In fact, the Young Socialists would walk through fire for Schulz - even without a selfie. It's an incredible twist of fate. Between the Young Socialists and Sigmar Gabriel there was an openly displayed mutual rejection. Today everything is different. After the event, Schulz autographs a series of brand new SPD party membership books handed to him by young people.

Schulz has become a kind of German Bernie Sanders for the under-30s. Trump and Brexit are already politicized, and a new generation seems to be emerging for the SPD. Sometimes enthusiasm takes on almost hysterical dimensions. A young woman wants a selfie: "Martin, I love you so. You are my second father!" Schulz replies: "Now don't be silly." But he really does not seem bothered by the adulation. In this election year, older people believe in him, younger people love him - things couldn't be better for Martin Schulz.