Ukraine's PM has said Kiev will implement a free trade deal with the EU on January 1 and fight corruption. Merkel encouraged reform and said Ukraine's "Association Agreement" with the EU is not targeted against Russia. 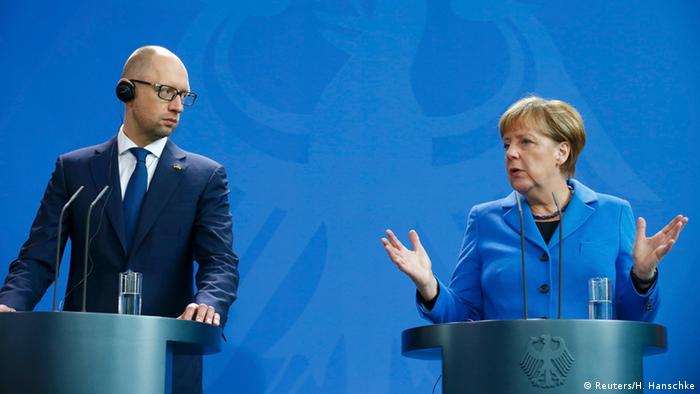 Ukraine will move ahead with a free trade pact with the EU on January 1, Ukrainian Prime Minister Arseniy Yatsenyuk said after meeting with German Chancellor Angela Merkel in Berlin on Friday.

"Russia does not have a veto over our trade with the EU," he said.

Russia opposes the Association Agreement, which Ukraine signed with the EU in March 2014, shortly after the Euromaidan protests ousted pro-Russian president Viktor Yanukovych after he refused to sign it. The economic portion of the agreement was left to be signed by the EU and Ukraine in June 2014.

Merkel, whose Germany has sought to end the conflict in eastern Ukraine between pro-Russian rebels and Kyiv, reiterated that the agreement was not targeted against Russia.

"I want to say one more time that the Association Agreement which includes a free trade treaty is not directed against anyone," Merkel said at a press conference with Yatsenyuk.

It constituted an "opening of the Ukrainian market in the direction of Europe" but was not directed at Russia, Merkel said, adding that she had sought to encourage Russia to restore Ukraine's status within the free trade zone of the Commonwealth of Independent States.

Ukraine and Russia have gone through multiple rounds of talks to restore a free trade agreement. Merkel said she recently brought up the issue in talks with President Vladimir Putin but it didn't yield any results.

"If the will had been there, results would have been achieved," Merkel said.

Germany is Ukraine's third largest trade partner after Russia and China, but the conflict in the country and Ukaine's debt difficulties and recession has hit trade figures in both directions.

Yatsenyuk said his country was working to flight corruption and implement reforms as part of an IMF bailout package and agreements with the EU, which Merkel described as "an essential condition" of enhancing economic relations between the two countries.

Earier on Friday, Yatsenyuk told a business conference in Berlin his government was cracking down on corruption and sought to replace 9,000 corrupt judges.

"We need to impose a radical reform of justice," he said.

Merkel said Ukraine was following a "courageous road" but recognized how difficult it would be to fight corruption and implement tough reforms.

According to the Berlin-based corruption watchdog Transparency International, Ukraine ranks 142 out of 175 countries on its corruption index.

Pro-Russian separatists have agreed to postpone the local ballots in east Ukraine that Kyiv claimed to be illegitimate. The truce in Ukraine is "holding and being strengthened," NATO Secretary General Stoltenberg says. (06.10.2015)