Merkel warns against British ′illusions′ as Brexit negotiations begin | News and current affairs from Germany and around the world | DW | 27.04.2017

In an address to the Bundestag, German Chancellor Angela Merkel talked tough ahead of Saturday's EU-27 summit on Brexit. The UK, she said, would not be as well positioned as EU member states. 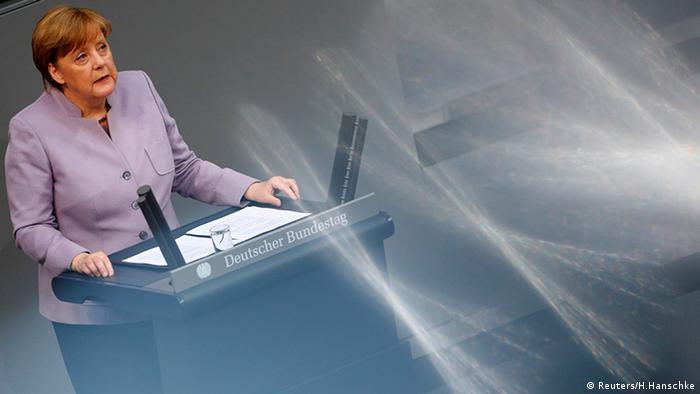 Ahead of a meeting of the 27 remaining European Union nations in Brussels on Saturday, Chancellor Angela Merkel briefed the German parliament, the Bundestag, about Germany's strategy vis-a-vis Brexit. But at least in part her message was aimed across the English Channel.

The chancellor warned London not to expect a deal that would privilege the UK.

"A third-party state cannot enjoy the same advantages or be better positioned than an EU member state," Merkel said. "I have the feeling that some people in Britain maintain illusions in this regard. They're wasting their time."

That line drew applause from members of the Bundestag. Merkel reiterated that negotiators would have to resolve the details of Britain's exit from the EU, including financial obligations that could extend beyond Britain's departure, before any deals could be struck about a future English-EU relationship.

"These steps must happen in that order," Merkel said. "Our goal is to get the best deal for Europe and its citizens."

Merkel added that negotiations could only commence in earnest after the United Kingdom's parliamentary election on June 8.

Expats high on the agenda

Not all of Merkel's remarks focused on the potential conflicts of interest between the EU and the UK. The chancellor also said that Germany and the EU had an interest in a strong and prosperous Britain.

She said one of her priorities was to clear up the future status of the approximately 100,000 German citizens permanently living in Britain. In return, Germany and the EU were prepared to offer British expatriates in the bloc a "fair deal." 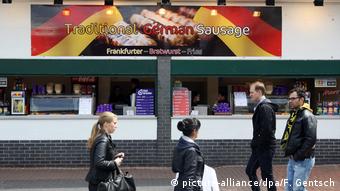 Merkel also expressed confidence that the EU and post-Brexit Britain shared interests in businesses being able to sell their products to the other and fighting against terrorism and organized crime.

At the same time, the EU showed a high degree of solidarity in the wake of the British referendum in June 2016, in which a slight majority of UK voters supported the Brexit, Merkel added. Specifically naming Ireland, she said that it was a sign of European strength that none of the individual EU-27 states had engaged in "preliminary negotiations" with London.

Speaking for the Social Democrats (SPD), the junior partners with Merkel's conservatives in the government, Thomas Oppermann said: "I'm glad that within the coalition we have consensus on this issue." 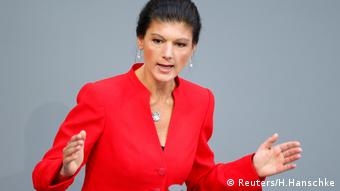 But Sahra Wagenknecht of the opposition Left Party accused Merkel's government of trying to "punish" the UK and of ignoring the social concerns she said had led many people in Britain to vote for the Brexit.

"The EU is threatening to fall apart," Wagenknecht said. "Anyone who thinks he needs intimidation to ensure European solidarity has already long given up on Europe."

Merkel's CDU-CSU, the SPD and the opposition Green Party rejected that assessment. The Greens, represented by Katrin Göring-Eckardt, called upon Merkel to reassure expats of their status by this summer.

Significantly, Merkel began her address with statements critical of Turkish president Recep Tayyip Erdogan and irregularities in Turkey's constitutional referendum, which gave him what some say, are quasi-autocratic powers. She also called for the release of a German journalist currently detained in Turkey.

"To be unmistakably clear, it's not compatible with the rule of law if the Turkish executive judges people in advance, as has obviously happened with Deniz Yücel," Merkel stated.

But Merkel said it would be a mistake for the EU to "turn its back" on Turkey, which is still, nominally, a candidate for potential membership in the bloc. 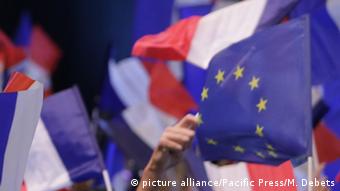 Spokespeople for the parliamentary party groups joined in the criticism of Erdogan. They also took the opportunity to comment on the results of the first round of the French election, which left centrist investment banker Emmanuel Macron to face right-wing, anti-EU populist Marine Le Pen in a run-off vote on May 7.

Wagenknecht criticized the fact that the poll had left voters with a choice between a "neo-liberal" and Le Pen. That wasn't a popular view with her parliamentary peers.

Göring-Eckardt said all German parties had a responsibility to support "democracy," in the form of Macron, against the "hate mongering" of Le Pen. SPD General Secretary Katarina Barley said Wagenknecht's remarks showed that she had "no clue."

It was an impressive display that the EU is confronted by issues other than Brexit and that national political squabbling continues as usual.