British PM May dines with EU leaders as Brexit positions harden | Europe | News and current affairs from around the continent | DW | 27.04.2017

Britain's Prime Minister May has invited key European Union figures to dinner as they push for British payments of up to 60 billion euros. Her spokesman said the rights of EU citizens would be discussed. 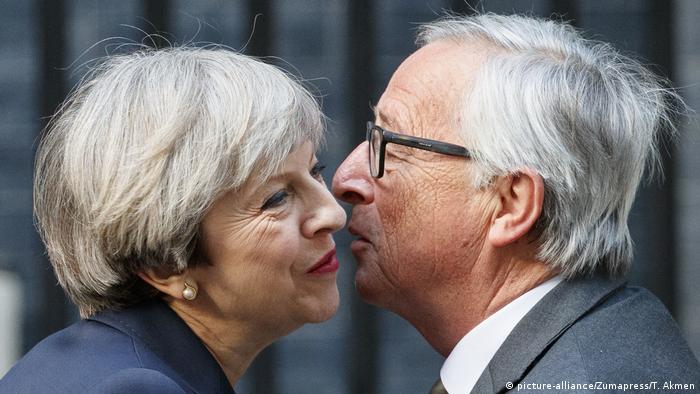 Edward Dean’s parents voted to leave the EU - while he was studying to become a diplomat in Brussels.

Britain's largest opposition party has vowed to guarantee EU citizens rights if elected to govern in June. Roughly 3 million EU citizens reside in the UK. Analysts believe they may be used as bargaining chips. (25.04.2017)

The UK's upcoming general election should ease pressure on UK PM Theresa May to please her more hard-line supporters, European Parliament chief Antonio Tajani has said. EU citizens' rights in the UK are also a priority. (20.04.2017)

British Prime Minister Theresa May dined with key EU Brexit negotiators in London on Wednesday, ahead of an EU summit on the matter.

May invited European Commission President Jean-Claude Juncker and EU Brexit negotiator Michael Barnier for a "useful working dinner," her office said. She was joined by Britain's Brexit Minister David Davis and Finance Minister Philip Hammond, in an attempt to improve the atmosphere before Brexit talks start in earnest in early June, her aides said.

"Following the UK's letter of notification under Article 50, she reiterated the UK's commitment to achieving a deep and special partnership with the European Union," a statement from the prime minister's office said.

Ahead of the dinner her spokesman speculated that the rights of EU citizens would be part of the discussion. Davis said there would be "difficult issues to confront" in the negotiations, but asserted that Britain "has a very good reason to feel optimistic."

A spokesman for the European Commission described the meeting as "constructive."

The EU's latest draft negotiating guidelines reportedly call for Britain to pay EU dues until 2020 - a full year after it leaves - at a speculated cost of 60 billion euros (US$65 billion).

The draft guidelines reportedly also made new demands on financial services and immigration, with calls for Britain to grant EU citizens permanent residency after living there for five years. They also reportedly stated that Britain's finance industry would not necessarily be covered by any future trade deal with the EU and that it must follow the bloc's rules in exchange for easy access to EU markets.

EU Commissioner Elzbieta Bienkowska warned in an interview with German daily "Die Welt" that Britain "can't have everything in the end. They can't have their cake and eat it."

The dinner was one the latest in a series of talks with senior EU figures in recent weeks, including with European Parliament President Antonio Tajani and European Council chief Donald Tusk.

Britain is heading to a snap election on June 8 with May's Conservative Party holding a 16-point lead over the Labour Party, an opinion poll showed on Wednesday, a smaller lead than other polls suggested.

May called the election in a bid to bolster her majority in parliament ahead of the EU divorce talks.