Brexit, a diplomatic row with Turkey, growing nationalism: the EU faces unprecedented challenges. Is it about to fall apart, 60 years after the signing of the Treaty of Rome? Michel Friedman meets Margrethe Vestager.

Ahead of the 60th anniversary of the Treaty of Rome and the formal triggering of Brexit, EU Commissioner for Competition Margrethe Vestager told DW that with all its crises, the EU remains "one of the best places to live on earth, in history, especially if you're a woman."

UK Prime Minister Theresa May is expected to trigger Article 50 on March 29. This will mark the beginning of negotiations for Britain formally leave the bloc. This is the first time any EU member state is leaving the union. So far Brussels has taken the line that citizens’ rights and financial settlements must come before a deal on UK-EU trade relations is made. European Council President Donald Tusk has called for a summit of EU leaders to formally approve negotiating terms on April 29. Confronted with the consequences of Brexit, Vestager defended the core values of the union: "We have other crises and they are many. Most of them we haven't chosen ourselves. What we can choose is to take the responsibility to do something about it. (…) This is the longest period of peace in, well, almost world history. Europe has never been this peaceful before."

The EU is also in a severe diplomatic crisis with Turkey. President Recep Tayyip Erdogan has accused the Dutch of being responsible for the slaughter of Bosnians in Srebrenica in 1995 and said Germany used "Nazi practices" by blocking political rallies in the run-up to the referendum in Turkey on April 16. A number of Turkish government officials were attempting to drum up support for the referendum among Turkish voters who reside in Europe.

"I thought it's been a long time since Germany left [Nazi practices]. We are mistaken," Erdogan said. He is campaigning for a vote on constitutional amendments that would significantly widen his powers and transform the country from a parliamentary democracy into a presidential system. Critics say this would be a significant development towards an authoritarian one-man rule, similar to the Ottoman Empire which fell in 1923. 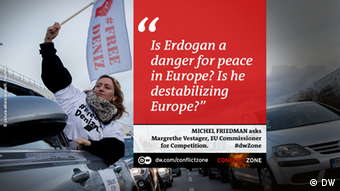 When asked about the ability of EU officials to reign in the Turkish president, Vestager said: "There are different levels of communication. All this is completely unheard of, unacceptable and yet at the same time you have relationships. There has to be a dialogue."

Vestager said Turkey is "so much more than Mr. Erdogan." However, the possibility of the country joining the EU shrinks daily. "For a very long time this negotiation has not been moving forward. Because if you are to become a member of the European Union you have to fulfill the Copenhagen criteria, you have to be a democratic country."

Condemnation from Turkish officials was not limited to the president. Following recent Dutch elections, the Turkish Foreign Minister said at a rally in Antalya: "There is no difference between the mindsets of Geert Wilders and social democrats in the Netherlands. They all have the same mindset ... That mindset is taking Europe to the cliff. Soon wars of religion may and will start in Europe."

When Conflict Zone host Michel Friedman asked the commissioner whether a religious war was possible in Europe, Vestager responded: "Unfortunately, I think that as long as humans are responsible for peace, war is a risk."

The future of a pluralist European Union also faces other threats. Upcoming general elections in France and Germany are also being seen as test of whether the historical core of the EU will to populism. Vestager remains optimistic: "There is no going back to a time [when] you had more national voices in the European political debate. There is a lot of work to do and it will not only change those who vote for populist or nationalist parties today. It will also change those of us who really strongly believe in European cooperation."

"And you find politicians in every country, you find citizens in every country who want to do something else than just lean back and say 'Oh my God, everything is falling apart, I will do nothing but protect myself,'" Vestager added.

Is Europe at 60 a has-been? Find out now on Conflict Zone.

British Prime Minister Theresa May is set to trigger Article 50 at the end of March, her office has announced. The move would then set off two years of formal negotiations on Britain leaving the European Union. (20.03.2017)

Turkish-German relations have arguably reached a historic low point. DW explains what's behind the conflict over the Turkish president's accusations of "Nazi practices" in Germany. (21.03.2017)