The top Christian Democrat wants Bundestag parties to come to a climate consensus. In an interview with German media, CDU boss Annegret Kramp-Karrenbauer also had stern words for coalition partners the Social Democrats. 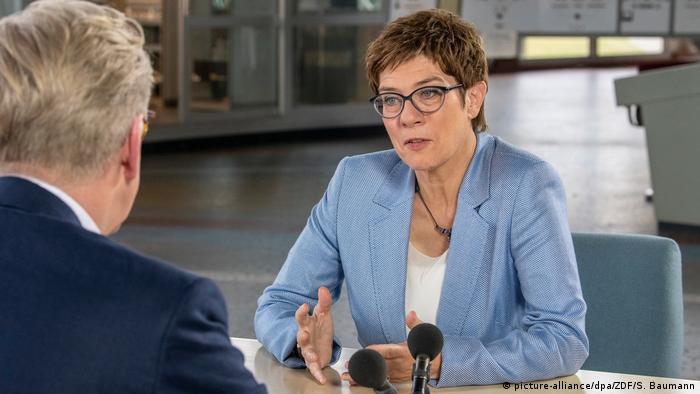 In her first summer interview with public broadcaster ZDF as leader of the Christian Democrats (CDU), Annegret Kramp-Karrenbauer called on Bundestag parties to agree on measures to reduce emissions by 2030. Climate change has split parties, as well as Germany's government, in which Angela Merkel and the CDU share power with the Christian Social Union (CSU), its Bavarian sister party, and the Social Democrats (SPD).

Read more: A conservative road map for Germany after Merkel

"We need a national climate consensus," Kramp-Karrenbauer, who is sometimes called AKK, told ZDF. She said that, after lawmakers return from what Germans call their summer pause, she would reach out to parties to come to a "common solution."

Read more: Can AKK still cut it as chancellor?

Many members of the CDU, CSU and opposition Free Democrats disagree with a proposal by SPD Environment Minister Svenja Schulze to regulate emitters of carbon dioxide and introduce fees. AKK hasn't committed to the plan. "CO2 must cost something," she told ZDF on Sunday, but added that she had "not personally determined" if she would back the environment minister.

AKK said the SPD must support efforts to install CDU Defense Minister Ursula von der Leyen as head of the European Commission. EU leaders nominated von der Leyen after they were unable to agree on the candidacy of CSU MEP Manfred Weber, who the conservative bloc of parties in the European Parliament had proposed for Commission president.

"If Ursula von der Leyen doesn't get the necessary majority in the European Parliament, partly because of the SPD's actions, that would be a huge burden on the work of the government and the coalition," she said.

The SPD has increasingly lost support after agreeing to back Merkel's governments in 2013 and again in 2017, leaving members divided over whether the party should stay in government or join the opposition to return to power. Many voters have abandoned ship for the Left Party or the Greens.

AKK also said she'd consider sending troops to Syria to fight the Islamic State, as requested by the US envoy for the anti-IS coalition, James Jeffrey, in an interview with the Welt am Sonntag newspaper published on Sunday. Going beyond the Bundeswehr's current mandate — to support the coalition via reconnaissance, refueling and training — which ends in October, could further strain ties with the SPD, which has traditionally expressed skepticism of German military engagements.