German Chancellor Angela Merkel has emphasized the importance of civil liberties and an opposition at a meeting with Hungarian Prime Minister Viktor Orban. The two leaders also discussed the conflict in Ukraine. 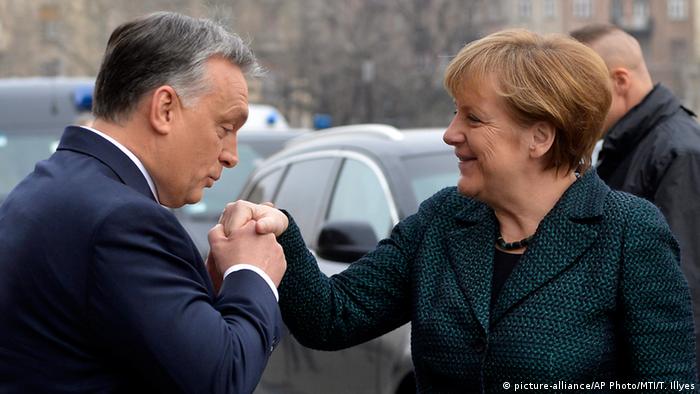 Merkel told reporters in Budapest that she had stressed to Orban that "even if you have a broad majority, as the Hungarian prime minister does, it's very important in a democracy to appreciate the role of the opposition, civil society and the media."

On Ukraine, the two leaders agreed that the top priority was to achieve another ceasefire. Merkel emphasized that the EU's united stance on Ukraine was "a real asset" that needs to be maintained. Both countries ruled out supplying Ukraine with weapons. Orban, who has been accused of being too close to the Kremlin, said that only a solution that "leads towards peace" was acceptable.

It's Merkel's first visit to Hungary since Orban came to power in 2010 and one of just a few visits by western leaders since then. It comes two weeks before Russian President Vladimir Putin is scheduled to meet Orban in Budapest.

Germany, Europe's biggest economy and Hungary's biggest trading partner by far, is said to be one of the few if not the only European country that can hope to keep Hungary looking towards the West. And Merkel's Christian Democrats are in the same center-right grouping in the European Parliament as Orban's Fidesz party.

Around 6,000 German firms, including carmakers Audi and Daimler, employ roughly 300,000 people in Hungary. Merkel said she hoped that German companies had created plenty of jobs and could continue to do so.

Orban has caused ructions in the EU by introducing measures that undermine the western idea of democracy, such as tightening control of the media, replacing officials with allies, changing electoral rules in his party's favor and restricting the work of non-governmental organizations (NGOs).

Citing countries such as Russia, China and Turkey, Orban last July said that he was looking to establish an "illiberal democracy," meaning a state that holds elections but curtails civil liberties and welfare.

On Sunday, thousands of anti-Orban protesters rallied outside the Hungarian parliament, waving EU flags, with some banners pleading with Merkel to "save" Hungary.

After her meeting with Orban, Merkel is due to hold a speech at the German-language Andrassy University, where police banned a pro-western and pro-human rights demonstration at the last minute and redirected it to an area that Merkel would not see en route to the university. Merkel was also scheduled to pay a visit to Budapest's synagogue, Europe's largest.

The Hungarian prime minister has announced that his government is scrapping a plan to introduce a tax on the use of the Internet. The move comes in the face of mass street demonstrations against the plan. (31.10.2014)