Merkel plays down expectations ahead of Moscow peace talks

Chancellor Angela Merkel has played down expectations ahead of a meeting with Russian President Vladimir Putin aimed at ending the fighting in Ukraine. She also described her efforts as being "about European peace." 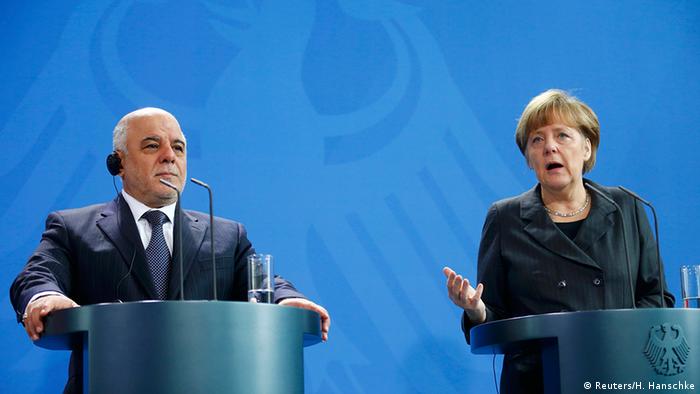 Speaking to reporters at a press conference following a meeting with Iraqi Prime Minister Haider al-Abadi on Friday in Berlin, Chancellor Merkel did not appear optimistic about the chances of a breakthrough at peace talks involving French President Francois Hollande and Russia's President Vladimir Putin in Moscow later in the day.

"We know it is completely open whether we'll manage to achieve a truce through these talks," she said. "We don't know whether it will happen today or if further talks will be required."

Despite playing down expectations for success, Merkel said she and Hollande would "use all our power" to try to bring an end to the bloodshed in eastern Ukraine.

"It's about our interests, German and French but especially European interests... it's about European peace," the chancellor said.

Merkel also rejected media reports that suggested that the peace initiative that she and Hollande had presented to Ukrainian President Petro Poroshenko in Kyiv on Thursday, included an offer to pro-Russia separatists of more territory than they already control.

"As German chancellor I would never, over the head of another country, in this case Ukraine, get involved in territorial issues," she said.

For his part, the French president appeared more upbeat than the chancellor just hours before joining her for the talks, saying he was going to Moscow "to seek a deal."

"Everyone is aware that the first step must be a ceasefire, but that is not enough and there must be a comprehensive settlement," he told reporters in Paris.

Neither Merkel nor Hollande have commented on the details of their initiative, but a statement posted on the Ukrainian president's website said the plan called for a quick ceasefire, the withdrawal of foreign forces from Ukraine, the withdrawal of heavy weapons and equipment, the closure of the border and the release of all prisoners.

EU and US 'must stand together'

Meanwhile, the crisis in eastern Ukraine was high on the agenda as European Council President Donald Tusk hosted US Vice President Joe Biden in Brussels on Friday.

"This is a moment where the United States and Europe must stand together, stand firm. Russia cannot be allowed to redraw the map of Europe because that's exactly what they are doing," Biden told reporters, placing the blame for the crisis squarely on Moscow.

"Ukraine is fighting for their very survival right now. Russia continues to escalate the conflict by sending mercenaries and tanks," Biden said. However he did not mention possible arms shipments to the Ukrainian forces, a step that is reportedly being considered in Washington.

Pro-Russia separatists and Kyiv officials have reached a truce to allow for the evacuation of civilians from a besieged town in eastern Ukraine. The move comes amid a new German-French push for peace. (06.02.2015)

The NATO alliance is set to expand its rapid response force from 13,000 to 30,000 troops. The move was in response to Russian aggression in Ukraine and the challenge of Islamic extremism, its head Jens Stoltenberg said. (05.02.2015)

Russian aggression is the biggest threat facing Ukraine, the US Secretary of State said after talks with the Ukrainian president. German and French leaders announced a surprise visit to push for peace, as fighting raged. (05.02.2015)