Merkel in Mexico - talking trade and digital rules | Germany | News and in-depth reporting from Berlin and beyond | DW | 09.06.2017

German Chancellor Angela Merkel is struggling to duck her Mexican visit's symbolism, south of Donald Trump's planned border wall. She has discussed trade and digital rules. DW's Michaela Küfner is with the chancellor. 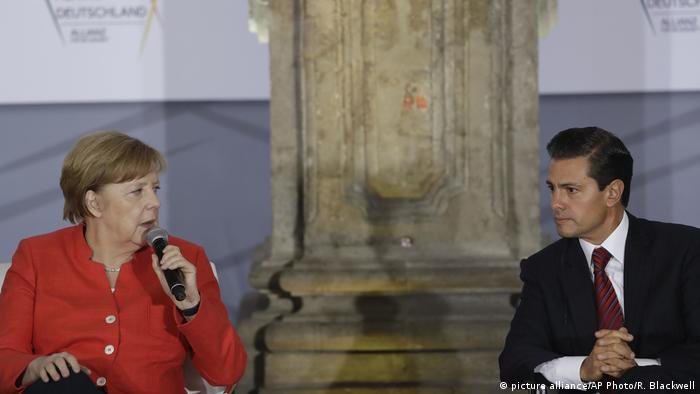 There are questions that simply won't go away. The one following Angela Merkel around her two-stop visit to Latin America is whether she is seeking a global leadership role, now that the United States seems to be pulling up the drawbridge to the rest of the world. The short answer is no. The intent is nowhere to be seen. Instead the chancellor keeps stressing her G20 preparation mission to dispel the appearance of any kind of anti-Trump alliance.

The G7 meeting in Sicily last month highlighted that a dynamic of six-against-the-one world power, the US, only deepens rifts in the West. With the G20 Summit hosted by the German chancellor coming up in July, any kind of 19-against-one scenario between US President Donald Trump and the rest of the world's largest economies would become the German chancellor's mess to clean up. Or worse: it could be seen as a mess made in part by her poor leadership.

Now the real question: Will the vacuum created by Trump in Latin America - and, more worryingly, the rest of the world - allow Angela Merkel to escape the role of "leader by default?" Again, the short answer is no. Her trip to Argentina and Mexico keeps providing evidence of that.

Lots of deals, but one major trade partner

In Mexico, her second and final stop after Argentina, the German chancellor meets President Enrique Pena Nieto, who runs the country with the most free trade agreements in the world. And yet, with 80 percent of exports going to its mighty neighbor to the north, Mexico lives on a tight economic leash firmly held by the US. Throw in the threat of the border wall and one gets a pretty good picture of the daily pain Pena Nieto faces in trying to fend off the rise of left-wing populism in Mexico. It translates into potential political dynamite at home that could see his PRI party ousted from power in next year's elections. Mexico's populism feeds on anti-American sentiment, which has unsurprisingly gone through the roof since Donald Trump came to power.

No doubt Mexico will take any reassurances Chancellor Merkel has to offer. Traveling with her is a powerful business delegation potentially worth billions in fresh investment. President Pena Nieto will also want to make headway in securing an update of the EU-Mexico free trade agreement as soon as possible, as the US presses ahead and forces a renegotiation of NAFTA, the trade pact connecting Mexico, the US and Canada.

Merkel spoke to people at a pavilion during an event of the Dual Year Germany-Mexico, at the Revolution Monument in Mexico City on Saturday. She said that the digital world needed regulations like those that exist for financial markets in the G20 and for trade under the World Trade Organization.

"We still have no international rules," Merkel said alongside Mexican President Enrique Pena Nieto, stressing that there were important security concerns without common standards. "Otherwise some provider could emerge ... that's an island, and from which things could be done, relevant to security, that could destroy an entire system. On this question of the rules-based handling of it, we're still right at the start."

German business leaders were scheduled to meet Mexico's NAFTA renegotiator-in-chief, Ildefonso Guajardo. They have a lot to talk about. There's little sign yet that Washington is catching on to what many business leaders already perceive as fact: that others will pick up loose business ends where America pulls out. The optimistic spin on Trump's policy towards Mexico is that what currently sounds like a death threat to Mexican manufacturing could become its involuntary catalyst to a more diversified future. Geography still counts in global trade, though, so this could prove ambitious.

But meeting the Merkel will mean more than business for Pena Nieto, who is not known for standing up for a free press, let alone answering their questions. More than 100 journalists have been murdered in Mexico since 2000, primarily those who cover drug cartels and political corruption, especially at the local level.  State protections are barely enforced as many politicians have ties to organized crime. Merkel will send a loud message when she meets civil society organizations during her 20-hour visit. The hope appears to be that Pena Nieto may also start to see the role of a free press as an ally against crime, rather than an enemy in the daily battle to control his public image. 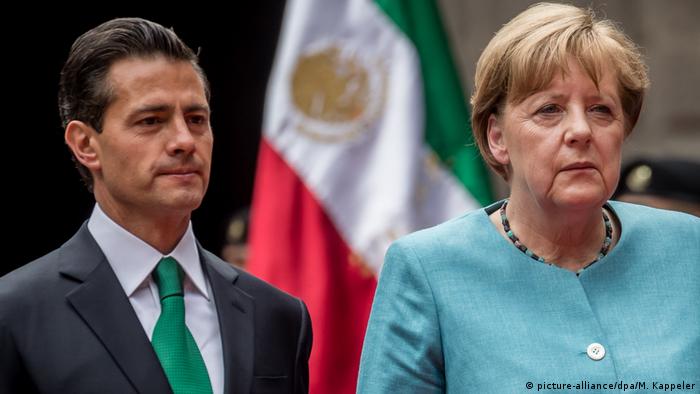 Their styles are rather different, but the understated Merkel is said to appreciate straight-talkers

Since 2015, Germany and Mexico also share an experience that has transformed both countries. The German chancellor is a relative newcomer in dealing with large numbers of migrants. The main body of some 800,000 migrants - many of them fleeing war in Syria - reached Germany two years ago when Merkel briefly suspended the EU's typical rules for would-be refugees. Here Mexico has a head-start of sorts, having been both a transit route and a country of origin for people seeking a better life in the US for decades. With the looming threat of a border wall, Mexico is increasngly trying to stem the flow of people from Central and South America towards the US border. Merkel will be hoping to win Mexico's support for her G20 initiative to improve living conditions in African countries many migrants are leaving. 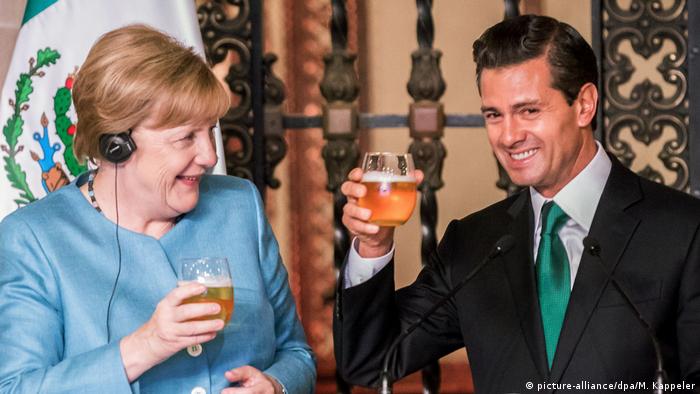 President Pena Nieto and Chancellor Merkel are much further apart in political style than she and Argentina's President Mauricio Macri, whom she visited on the first leg of her whirlwind trip. While Argentina's Macri and Merkel are strikingly similar in their calm and controlled manner and their matter-of-fact language, Pena Nieto is more prone to a bit of political drama, unafraid to publicly draw red lines, also towards America. When Trump invited him to come to the White House to talk about the border wall, he let it be known that he was unavailable. Though not always the straightest of talkers herself, the German chancellor is known to appreciate partners who make their positions clear.