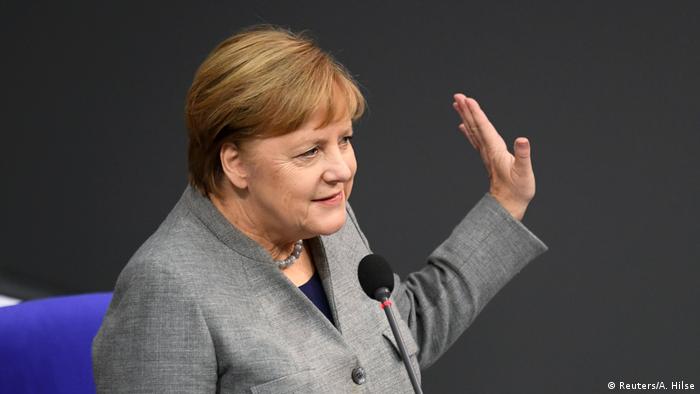 German Chancellor Angela Merkel was confronted on everything from climate policy and immigration to 5G expansion and Israel during a loose and occasionally lighthearted quickfire Q&A session in the Bundestag on Wednesday.

In the hourlong grilling, Merkel had one minute to answer each question from parliamentarians of all parties, a format introduced in the current legislative period and being tried for just the fifth time. The chancellor occasionally indulged in some uncharacteristic banter over the format rules with the Bundestag's president, and her former finance minister, Wolfgang Schäuble. Merkel used her answers to broadly defend her government's record and policy, though the time limit occasionally allowed her answers to remain vague.

The session began with a familiar criticism from the far-right Alternative for Germany (AfD), when the lawmaker Gottfried Curio asked whether she accepted any personal responsibility for crimes committed by immigrants in the past four years.

"I think Germany helped a lot of people in need, and that there was whole social show of support," the chancellor replied, to applause from the chamber. "And that, at the same time, we worked on the organization and steering of immigration, and that we continue to work on it, and that the numbers show that this work was not in vain."

Merkel was reluctant to say whether Germany would accept any unaccompanied minors from the asylum camps on Greek islands, where, according to rights organizations, people are currently subjected to dangerously inhumane conditions.

Here, Merkel appealed to fellow EU members, rather than announcing unilateral action. "If Europe is a Europe of values, then there are demands on others too," Merkel said, answering a question from the Greens' Luise Amtsberg. The chancellor said the issue was currently being discussed at the European level.

That was Merkel's answer to most questions: If there had been a problem in the past, Germany has found a good compromise, and if there is a problem now, the relevant people would negotiate. For example, Merkel did her best to soothe the Social Democrat Nina Scheer, who asked whether the government's renewable energy targets were still reachable with the current restrictions imposed on wind farms, which have to be 1,000 meters (3,300 feet) from people's homes. That extra restriction was forced through by the Economy Ministry, and has led to concern from environmental organizations.

"We share the same aims in wanting to expand wind energy," the chancellor told Scheer. She then acknowledged that the current situation was not acceptable, and said government officials were discussing the regulations with the relevant state premiers, and that they had agreed to find a solution by March.

Merkel also said she supported the European Union's new aim of reducing carbon emissions to 50-55% of 1990 levels by 2030, rather than 40%, as previously announced. At the same time, she remained vague on what that more ambitious goal would mean for Germany's own efforts: "What task that leaves to each state, there will certainly be a debate about that," she said.

The AfD's Jürgen Braun challenged Merkel on Germany's voting record at the United Nations, accusing her government of voting "against Israel" 14 times.

Merkel countered that Germany had almost always voted with the other EU countries on Israel-related resolutions at the United Nations, except in a few cases when it would break ranks to vote in Israel's favor. "Solidarity with the state of Israel — and I have said the security of Israel is one of Germany's reasons of state — does not mean a 100% agreement with all of Israel's political actions," Merkel said.

The chancellor also defended the government's line on the expansion of 5G internet, which has triggered fears about the potential influence of the Chinese tech giant Huawei on German infrastructure.

Merkel repeated the government's policy that it would not shut any company out of the telecom market, adding that she had faith in the German security agencies, and that the government would work closely with parliament to develop relevant safety standards.

The German chancellor told the Bundestag Germany must address climate protection, digitalization, and xenophobia. The opposition accused her of "deindustrializing" the country in the name of a "green-leftist ideology." (11.09.2019)